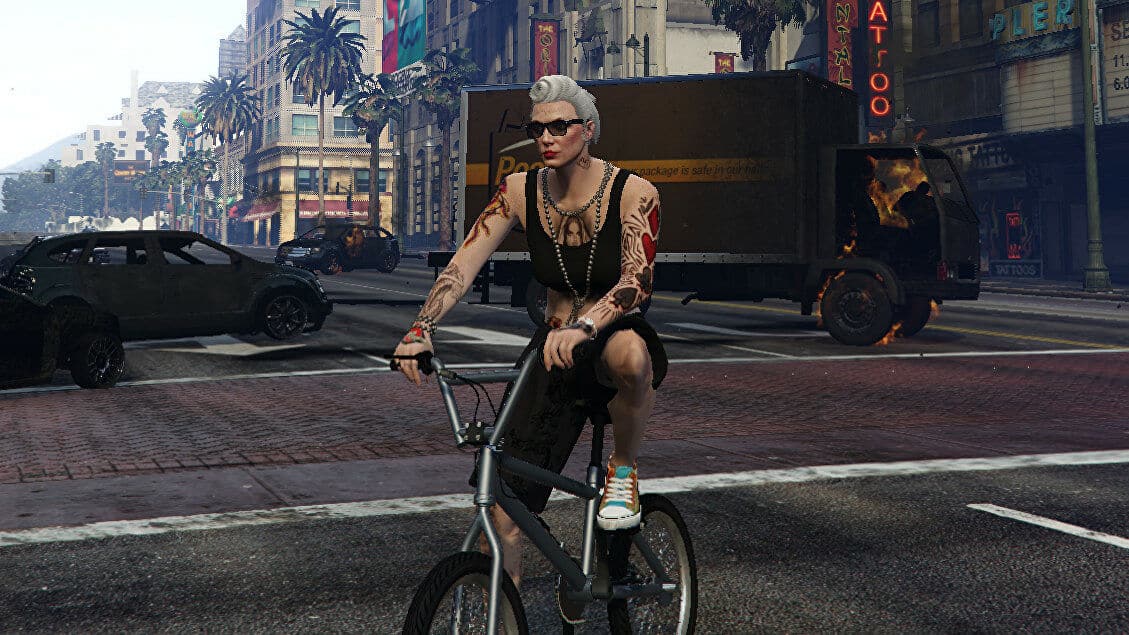 Alongside the Tour De France, I’m riding my own Tour De Jeux, a celebration of cycling in games and in life. Saddle up and join me!

The game I’ve done the most virtuacycling in is named after a whole other form of transport, but it’s also a great place to ride a bike. When I’m visiting Grand Theft Auto Online for funsies, just to watch mayhem unfold, I like to do it atop a BMX. Sure, everyone in Los Santos wants to murder me, but players are a little friendlier when you’re pulling sikk tricks. A little.

GTA Online has an impressive spread of bicycles to buy: a sporty road bike, an easy-going beach cruiser, an off-roading hardtail mountain bike, and—my favorite—a stunty BMX. When I’m not logging on for profit or bloodlust, I’ll usually pull a bicycle out my garage and trundle about town, watching the murders, stunts, chases, japes, and alien wars of regular Los Santos life. Players seem to like cyclists. Or at least, players seem slightly less eager to murder people on bikes.

The fact that I’m slow, exposed, and easy to knock off means I’m not much of a threat. I’m just a tourist come to watch the murder, you know? I want to bunny-hop over your car, try to ride on your truck, and follow you through a police chase. That’s all! Please let me live! Though the fact that I’m so vulnerable does make people more inclined to screw with me.

One player yesterday spent seven minutes casually chasing me around and knocking me down before whipping out a gun to finish the job and claim a meagre $7000 bounty on my head (don’t ask). You can see some of that in this selection from my many deaths while nonviolently trundling about town:

See also  Is Twitch Losing Its Next Star Streamer To YouTube? Pokimane hints

GTA V’s cycling doesn’t feel much like real cycling (not like how Riders Republic impressed me) but it is great fun. The BMX is easy to jump and bounce around on too, and can casually pop up into a wheelie. I like the absurdity of wheelieing through a very, very active crime scene. It’s remarkably resistant to topping as well, often happily recovering from tumbles and bounces that should have fed skin to tarmac. I only wish I could master the glitch which lets you hop up walls like some manner of Spider-Bike (I blame my half-broken Xbox controller, thank you). That would have come in handy.

GTA Online is a terrible place in many ways. While it’s a little less stingy with money these days (finally!), you’ll still encounter the ubiquitous cheaters, racists, and miscellaneous jerks. But sometimes, you’ll land on just the right server and have a lovely little weekend ride—or at least you’ll laugh at how silly some of your deaths are.

Disclosure: I have some pals at Rockstar. Edinburgh’s a tiny city.