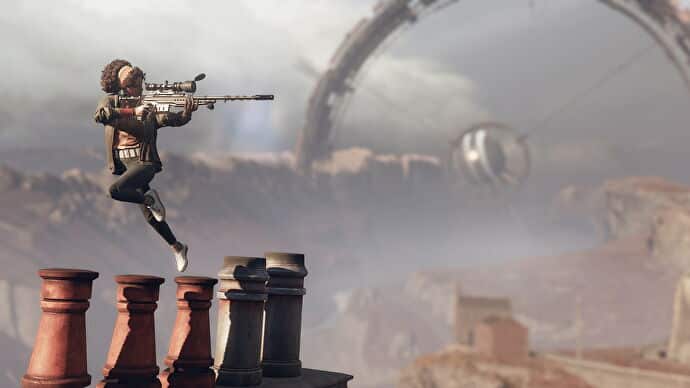 Arkane Studios’ back catalog shows a team that’s constantly growing, changing and learning from their past – something that has never been clearer than in their most recent game, Deathloop. The studio’s latest feels at once unique and distinct – and yet clearly carries that Arkane DNA, which has been fine-tuned with each successive release. It’s an ethos encapsulated by the game’s own time loop, in which protagonist Colt Vahn relives the same day again and again as he searches for a way to break free of it – an idea that was, among other things, designed to encourage something hardcore Arkane fans had been doing already – replaying the game over and over again.

While Dishonored had gently suggested repeat playthroughs with its kill/non-lethal runs, plenty of players still called it a day at the end of their first playthrough. Deathloop needed a more direct approach, its developers tell us.

“I was just talking on Twitter about my work on the bank job in Death of the Outsider,” says Dana Nightingale, campaign director at Arkane Lyon. “I feel like to properly experience everything that has to offer, you have to play it at least four times. I love making that kind of thing, where the choices you have are so meaningful, and they diverge so greatly, that it’s worth playing again to see everything else.

“So, how do we make a game where we do that, but help the player feel like going back and trying the different outcomes? We want to make that part of the experience. Our fans love to replay our games, but it hasn’t really been built into the experience to do that – with Deathloop it is.”

See also  Fallout: Who is Starring in the Amazon Series? All known actors

And so the team established the time loop – a Groundhog Day-esque feature rarely seen in games until very recently, but one that was perfectly tuned to make use of Arkane’s richly-crafted worlds without ever implying that there’s a single ‘correct’ approach.

“One of the most frustrating pieces of feedback that we hear when we work on a new immersive sim is ‘I’m not sure how the game wants me to play,’” says studio and co-creative director Dinga Bakaba. “The game doesn’t want you to play a certain way! It’s whatever works for you. When I look back at Arkane’s games, from Dishonored 2, Death of the Outsider and now Deathloop, we are kind of incrementally trying to surface to the player that we don’t want them to play a certain way. We’re proposing something – hey, you’re an assassin, you probably want to be sneaky – but is that the right way to play? No.”

This renewed commitment to player freedom is partially the result of an unexpected side-effect of Dishonored’s kill/no kill options. On paper, the non-lethal attacks, which were removed for Deathloop, encouraged fans to play their own way. However in practice, they often forced players into one of two predefined ways to play.

“In Dishonored, we had this consequence system that some people took as a morality system, which is at odds with that philosophy,” says Bakaba. “There is definitely a right way to play there, because there’s one that gets me a green checkmark, and one that gets me a red cross. But interestingly, in Death of the Outsider, we have a character that isn’t part of the whole game of the Outsider, of testing people and their morality. She’s here to get rid of him and end these things. So it was an opportunity to explore that, and say to the player, in the absence of the consequence system from the last game, this character doesn’t care about that. Maybe you shouldn’t either, you should do what’s fun.

“And then Deathloop is one step further in that direction, of telling the player that there isn’t a right way to play. Whatever way you choose to play through the day, you can take another one entirely the next day, and it’s in the middle of the same campaign. That was always one of the objectives, it’s de-emphasizing the idea that there’s a right way to play. I think, inherently, that immersive sims and arcane games are about this dialogue with the player. How can we give you all these stories without implying that there is a right way to play and also without you feeling lost?

Deathloop is one step further in that direction, of telling the player that there isn’t a right way to play.

“One interesting thing is that in French, we say that we ‘finish’ a game, we get to the end. But in English you say that you ‘beat’ a game – it seems there’s an antagonistic relationship in that culture!” Bakaba laughs. “At Arkane, we care a lot about the playfulness of getting towards an ending. We like to have several endings in our games, it’s interesting, but it’s really about the journey. What’s interesting is people setting their own challenges, and deciding what the game is for them.”

The player might define what the game means to them, but Arkane’s distinct touch in crafting the experience is immediately recognisable. And with a hefty amount of Dishonored DNA, and a multiplayer mode adapted from the studio’s canceled title The Crossing, I’d positive that Deathloop feels, in many ways, like the ultimate Arkane game – the distillation of all the lessons they’ve learned from their previous titles.

“I know some of my colleagues and peers disagree” says Bakaba, “but I hold the belief that given the exact same pitch, Arkane and say, Insomniac, would make two very, very different games. It’s not about what it is, it’s about how it’s made. There’s that philosophy to say that however differently it starts off, some of who you are will be reflected [in the game].”

All of which certainly helps when establishing that Arkane brand – but that familiarity can too easily become homogeneous without sufficient care. While Deathloop may have inherited the lessons of its predecessors, Arkane were keen to keep it distinct from their previous works.

“There were a few moments when the level design team had to really understand that we’re not making Dishonored,” says Nightingale. “And one of them was, we took away all the non-lethal content, all the non-lethal toys, methods and routes the player could take. At that moment, I think the level designers really had to be like, ‘Okay, so we’re really not making Dishonored. This is a different game.’ That kind of like re-aligned the team towards that. It’s like a train, it takes a little bit of time to slow down and change directions.”

And what of the lessons from Deathloop? What new alterations has Deathloop made to that distinct Arkane DNA?

“I don’t feel any interest in making a completely linear campaign again,” says Nightingale. “It’s not something I want to do again. I fell in love with the way Deathloop is structured, where the players’ goals are their own. The idea of ​​saying, ‘Okay, mission one, mission two, mission three…’ that feels like a step backwards for me. I feel like I wouldn’t necessarily have a job on a game structured like that. I’m sure I’d find a way to make it work, but that really shifted my perspective of what we can do in a game. Like hey, this is actually structured quite similar to an old school RPG – we can do that type of structure in this type of game, and it works. And that’s really exciting for me.”

“We set out to make a game that would have a lot of flavor,” Bakaba adds. “’Polarising’ was the word we used quite a few times. We understood that it’s not necessarily for everyone, but we wanted to make sure some people would love it – and actually, we had a good surprise and a lot of people loved it. And that was the theme from one of the analysts we worked with. They said it was a polarizing game, but that it doesn’t have to be. There are a number of ways, more than you probably think, where you can make people like your bullshit. That’s the weird thing about Deathloop. It’s a very unique game, it’s a strange beast. But at the same time it got a lot of mainstream awareness. We struck an interesting balance between mainstream appeal and making something completely weird.

“I hope this encourages more people to take some risks, even with big games. When you always give players what they expect, at some point that well runs dry. I think it’s important to renew yourself sometimes, and propose something very different. We think there is value in trying something and taking a risk, and if it picks up and picks up, and if it doesn’t – well, you go back to doing what you know how to do.”

“And now strangely,” says Nightingale, “Deathloop is something we know how to do.”