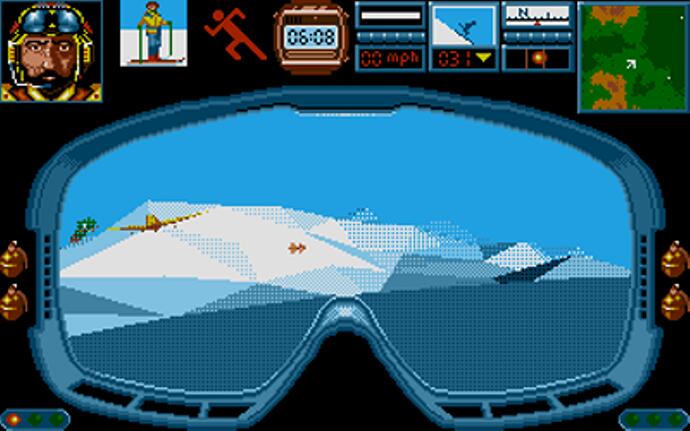 Too warm outside? Don’t think, just install something cold. Something like this for example:

Yes, unfortunately we are afraid of the spirits that we summoned, the nuclear weapons, but the whole thing can also have advantages. The Azores may be quite warm today, but in Midwinter’s future it’s an arctic landscape of snow and ice thanks to the post-nuclear war nuclear winter. To call 1989’s Midwinter over-ambitious for its time would be trivial: Mike Singleton – Lords of Midnight and sadly deceased in 2012 – exposes you to a massive open world in which you play first alone, later with allies to hire, the army of a brutal general. Sabotage, stealth, negotiations, tactical and strategic considerations on the one hand, first-person action on the other hand, all on technology from the late 80s? How bad did that get? Well, with landscape and objects you have to have imagination despite at least filled in vector graphics. The gameplay behind the facade, which was impressive at the time, is relatively transparent and many of the AI’s weaknesses can be exploited. But the ambition is staggering and Ubisoft could forge a modern open-worlder right on top of it all wrapped up in a slick engine that would still have its appeal.

Cold Factor: Far below zero, only a few volcanoes as heat sources ensure that there is still someone trudging through the snow here. Far and wide only white as far as the eye can see. Which is not so far considering the visibility at that time.

Make the slopes unsafe with a heavy vehicle. All slopes. No matter how icy. This modern driving sim from 2020 is not about fast lap times, but about skilfully bringing enormous amounts of horsepower safely over remote roads, through rugged canyons and snow-covered areas. In any case, Snowrunner scores with the brilliant driving and physics feeling, which already impressively conveys with the controller that your real weight is moving through unsafe terrain. From pick-ups to full-grown articulated lorries with 20lb tons of logs on the back, there’s plenty to choose from, and each behemoth has its own challenges and charms. In addition, there is a really beautiful look that tempts you not to pay so much attention to the serpentine and to wander into the distance. Which then always takes revenge directly.

Cold Factor: Far too sunny in some places at lower altitudes, despite the name there is still a lot of summer feeling. But on the higher levels, where the snow is waiting, it gets nice and fresh and occasionally drops below what feels like zero.

Hardcore build-up strategy with no mercy: In this end-time SimCity, you start out in an unforgiving ice world, with a single meager heat source and a few pathetic survivors. So that the light does not go out in the ice desert, quarters must be provided, a hospital, resources must be mined, better buildings must be provided, more settlers are needed, more heat… The concept is familiar, but the consistency with which Frostpunk celebrates hopelessness has its own charm. Especially at the beginning you quickly learn that you shouldn’t have any false sentimentalities here, but always have to focus consistently on what is needed at the moment. When a few go for the big buck? Hey, at least the furnace is still burning and hope lives on, if not many else. The game looks great, brings tons of playful details into the familiar concept, has exciting missions and scenarios to offer and should keep you busy well into winter, when the situation turns around and you are allowed to implement what you have learned here directly thanks to a lack of energy.

Cold Factor: If the snowy Midwinter was too cozy for you and reminded you more of a skiing holiday, Frostpunk will quickly drive you out with severe cold snaps. We’re not approaching absolute zero yet, but it’s a lot shorter to get there from Frostpunk.

Hopelessness and strategy are nice, but you want more melancholy and RPG? No subject, here is I Am Setsuna, the debut of Tokyo RPG Factory. In the title, playfully inspired by Chrono Trigger, the whole world is slowly sinking under a blanket of snow, monsters and demons are troubling the few inhabitants. The solution to the problem lies, of course, in a small group of heroes and the eponymous Setsuna, who you have to accompany on a rather sad journey. Everything is exclusively underlined by a melancholic piano soundtrack and the actually cute look creates the feeling of slowly dragging yourself through the snow towards an inevitable fate. Unfortunately, this sometimes also applies to the somewhat monotonous gameplay, but if you appreciate a clear, beautiful and slightly depressing J-RPG, you won’t be served much better than here.

Cold Factor: While I attested to I Am Setsuna’s ability to induce mild snow blindness, it’s almost a round warm-up after Frostpoint. The cute villages and inns make sure of that, but don’t worry, all that cold whiteness around it still puts I Am Setsuna just under zero.

End time again. After the beautiful sunny rays of the first parts have kept the south warm, the third Wasteland heads north into the nuclear winter. The turn-based role-playing game series with perhaps the longest break – 1988 to 2014 – grew in 2020 and this time relies on what feels like eternal ice and a lot of comfort. The battle interface has been significantly revised and now shows you the numerous skills and possibilities of your motley squad quickly and conveniently. Whether you want to keep moral values ​​in the mix-up or prefer to recruit the scum of the Wastelands is up to you, there are many paths to the goal and some can be walked hand in hand with mass murderers.

Cold Factor: Slightly below zero, because the many settlements and dungeons are actually quite cozy. Outside in the snowmobile, the exhaust is also steaming, so overall it stays quite toasty and warm, with the prospect of lots of snow.

In addition to Subnautica (which also brings minus degrees to your screen with the Below Zero expansion), probably one of the best survival games ever: After a geomagnetic storm, you are stranded in a frozen wilderness of northern Canada and explore your surroundings for things that will help you on to stay alive. The game comes without big tutorials and thus perfectly emulates the lostness that the game character must feel. And when you die, it starts all over again. If you don’t like the general aimlessness of openly designed survival games, you can also look forward to an extensive story mode that also lets solo friends immerse themselves in the spooky atmosphere and has top-class vocals. Among others, Jennifer Hale (“Female Shepard”) and David Hayter (“Solid Snake”) lend their voices to characters.

Cold Factor: I know of few games that capture the beauty and danger of the unrelenting cold better than The Long Dark, which is why it belongs on this list in its own right. (Alex)

A perpetual snowstorm rages in Alaska. As an Inuit girl, Nuna, you are on the road with your friend, an arctic fox, to find out what this extreme weather phenomenon is all about. This is the only way the young girl can protect her people. The two solve puzzles in the stormy snowy landscapes, in the ice-cold water or in icy caves. You take turns controlling the girl or the fox to solve tricky tasks together. Snowflakes dance everywhere in the cold blue sky, so many that it almost looks foggy. You will also see polar bears, mythical creatures and the beautiful Aurora. Never Alone is not just a puzzle-platformer with a cute story, it’s based on the folklore of the Iñupiat, the Alaskan indigenous people who helped make the game. One of the natives speaks the narrator and thus ensures a particularly authentic experience. Here and there small snippets of the old sagas are played, which the narrator explains to us. Despite the freezing cold, you will also learn something new.

Cold Factor: Alaska in the eternal snowstorm? If driving snow and icy landscapes don’t promise cooling, then I don’t know what does. Unfortunately, there are points deducted for the cute foxes, who will surely warm your heart too. You really can’t use something like that at the current temperature. Every degree counts here. (Melanie)

An ice planet like that would be really nice right now, wouldn’t it? A planet like EDN III that is in the midst of an ice age. Too bad that there are also a lot of nasty monsters aka Akrid making the area unsafe. Something is always. It’s up to you to fight these monsters to make the planet colonizable for mankind. Why? Because the earth is too hostile to life due to war, global warming and pollution. Hey, for a 2006 game, Lost Planet sounds surprisingly up-to-date. Not that it wasn’t foreseeable back then. Anyway, you can do a lot of action-packed combat here, including inside mechs aka virtual suits, while soaking up the nice, icy atmosphere. It’s still fun 16 years later.

Cold Factor: Snow and ice as far as you can see. If you really want to feel like you are on an ice world, this is the place for you. Put a fan next to it that blows cool air in your face and you’re right in the middle of it. The good news is that you won’t freeze to death in front of the screen if you’re not careful, you definitely can in-game. (Benjamin)

Anyone who knows the old fairy tale of the Ice Queen will quickly understand Röki’s story. Brother Lars is kidnapped and sister Tove sets out to rescue him in the snowy adventure from United Label Games and Polygon Treehouse. Along the way, you explore the atmospheric world full of creatures from Scandinavian folklore. Not a lot of text and jokes, but the atmosphere and landscape are in the foreground here. The story itself, while it may start out like a classic fairy tale, you’ll soon realize that there’s a lot darker here than you’d expect. The two siblings are accompanied by a sad family secret, and the Ice Queen faces a supernatural dilemma. The little game, whose characters look cute, is ultimately not a colorful children’s fairy tale from Disney, but a story full of riddles and dark sagas that are more reminiscent of the originals by the Brothers Grimm.

Cold Factor: After games like Frostpunk, Röki almost looks like a vacation under the palm trees. Nevertheless, you can cool down with Tove in search of her brother Lars in snowy Scandinavia! The speed at which you explore the game is pleasantly calm, the puzzles are a good challenge, sometimes there is even a little fear, which, as we know, also helps against heat. In addition, the scenes are saturated with snow, soft sounds and cold colors. (Ana)