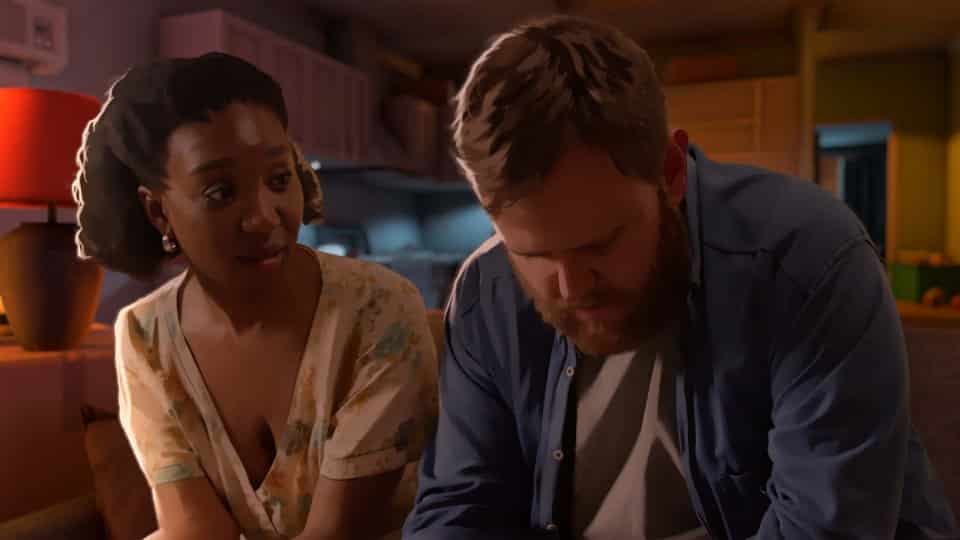 Xbox Game Studios is currently shining with great video games that delight millions of fans worldwide. Whether it’s the standout fun racer Forza Horizon 5, the popular shooter blockbuster Halo Infinite, or various smaller gems like Psychonauts 2 and the multiplayer Obsidian title Grounded, things are going pretty well for the often lagging competition from Playstation. Featuring the story-adventure As Dusk Falls from the London developer studio INTERIOR/NIGHT should there be a fresh gaming experience again. Similar to the Sony studio Quantic Dream, the focus is on interactivity, tough decisions and umpteen story paths that are impossible to predict. The obvious parallels to the Playstation forge Quantic Dream (Detroit: Become Human, Heavy Rain, etc.) are no coincidence. Caroline Marchal, ex-lead game designer for Quantic Dream games like Heavy Rain and Beyond: Two Souls, founded the British studio in 2016, which is now presenting the first work, As Dusk Falls.

The aim is to publish an exciting and original narrative adventure that catches the eye thanks to its unusual graphics. There’s also the option to play through As Dusk Falls with up to 7 friends – even with an app if you don’t have the necessary controllers.

How well it all works, whether the story, which stretches over 30 years, can inspire and for whom As Dusk Falls could be a mistake, we clarify in the test.

The almost six to seven hour storyline of As Dusk Falls focuses on two very different families. Especially at the beginning, the development team focuses on family man Vince Walker, who ends up in a motel on Route 66 with his wife Michelle, his six-year-old daughter Zoe and his grumpy father Jim. It all starts out quite tame: Most of our decisions relate to everyday challenges such as Zoe’s upbringing, the obvious tensions within the small group primarily related to Grandpa Jim, and Vince’s career. Or better: ex-career. His previous employer, an airline, wants to cover up a mistake and force Vince to sign a severance package. Is that really such a good idea?

Dialogue from real life: One of the greatest strengths of As Dusk Falls is the great dialogue, which does justice to the characters, their age, their position and their situation at all times. Not normal in the field of video games either. Unfortunately.”/>

Dialogues from life: One of the greatest strengths of As Dusk Falls is the great dialogue, which does justice to the characters, their age, their position and their situation at all times. Not normal in the field of video games either. Unfortunately.


And then there’s the Holt family, who have lived in the Two Rock County area of ​​Arizona, where the Walkers ended up, for over 150 years. We learn right from the start that the three brothers Tyler, Dale and Jay are stuck in a big pile of problems. Of course, we won’t reveal what exactly triggers it, why the three boys keep pushing the moral boundaries of their actions and how it came about that they armedly attack the exact same motel where the Walkers are staying. But obviously the situation is coming to a head, including a nervous police presence and hostage-taking.

As if that weren’t enough, there’s also the shady and aggressive sheriff Dante Romero, who has some skeletons in the closet, adding more shades of gray and surprise to the complex and layered situation. Depending on the decisions we make, the story changes drastically. Relevant characters may die or survive, drift apart, hate each other, or worse. It also has to be said that those who venture into As Dusk Falls should know that difficult issues such as suicide, domestic violence, panic attacks and trauma play an important role.

Better to despair together than alone

As Dusk Falls is a dramatic and brilliantly narrated crime story that is easy to immerse yourself in, but with a little amplification you can have a fascinating experience. As already mentioned, the interactive story can be played with a total of seven friends – via controller or app. Both options work fine. The As Dusk Falls companion app simply requires us to connect to the same network as our console or PC. And this is where the charm of the adventure lies: Anyone who throws themselves into the story about Vince, Zoe and Jay in a group of friends or within the family should expect a lot of discussions.