Clanfolk review: a settlement sim that’s a little too familiar 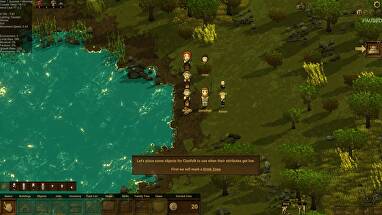 Clanfolk review
A people management sim set in yonder Scottish highlands that is, unfortunately, a drier, slower and more bucolic take on its Rimwordly influences.

Jonat is wandering around in the black pitch while everyone sleeps, even though he is: a) afraid of the dark, and b) a baby. This here is Clanfolk, a settlement sim about a family of Scottish tamagotchis. The first thing you’ll be screaming at me, as if I have not noticed, is how recognisably Rimworldy it looks. You’re right. Considering RimWorld cribbed plenty of its own notes from Dwarf Fortress and Prison Architect, it might feel incongruous to criticize Clanfolk for clinging too tightly to the hem of its inspiration. Sadly, it’s true. It is a drier, slower and more bucolic take on the exact same game.

Let’s look at that first night. When babby Jonat finally got grabbed and put in his cot (a square on the ground marked “sleep zone”) it was time for all seven of my clansfolk to sleep. Some of them shivered the entire night, most of them grumbled about being hungry, and everyone had their rest disturbed when the group patriarch, Jonathan, soiled himself in his sleep. Probably a result of the diarrhea he contracted from the dirty water he’s been drinking. The others cannot make fun. They’ve been drinking the same water, and two of them messed up their own beds (sleep zones) shortly afterwards. If godliness is next to cleanliness, the Macdonald Clan are Satan’s toilet brush.

See also  PlayStation 5: half of all releases for PC and mobile

From this first small disaster in Clanfolk, you can already see the strengths of applying top-down hardship sim design such as that in Rimworld to the Scottish wilds. The best thing about these kinds of games is that you form little tales, a toy drama playing out half in the game and half in your own head. Partly this is thanks to judicious clicking and perpetual editing of pawn behavior (Tasks! Priorities! The overwork button!) and partly it works thanks to the unknowable bedlam of code that lurks underneath it all. I can’t knock the game for its effort at simulation. An entire family has just shit themselves.

But personalities, quirks and ability feel less significant here. It quickly becomes a game of unlocking the next bit of equipment. The process for this is opaque. There’s a big research tree you can view by clicking on a panel labeled “ideas”. But the exact rules and reasons for unlocking certain technology are unclear (or at least I couldn’t figure it out). There are tiers of items (straw door, eel trap, hay wall) but they don’t all unlock at once, meaning there are unexplained reasons why I unlocked the technology of a stone hoe before, say, the “poop hole”.

That sense of low-burning confusion is something that affects the whole game. Which is more the fault of an ugly (and I assume placeholder) user interface. It’s a confusing mess of symbols, with samey buttons all dressed in wood panelling. It isn’t unintuitive so much as unmemorable and unclear. It feels chaotic, scattered, with menus and submenus arranged like on an English Professor’s desk.

It feels chaotic, scattered, with menus and submenus arranged like on an English Professor’s desk

I’m lucky in that I’ve played a lot of Rimworld (itself no looker in the UI department, granted) so the principles are the same, even if the layout is not. But I imagine someone without that grounding will be befuddled by all the archaic iconography and the questionably nested building options. It’s very hard to read.

The pop-up tutorials help a little, but again they are so basic in presentation that you barely want to indulge them. They also throw a lot of button clicks at you very early, and explain things in a strange order. Let’s set an eel trap, said one early lesson, now click this button to auto-queue eel collection, and now click this button to mark it as a level 10 priority task, and now this button to… All this before I even know what priority levels are, what levels 1-9 signify, or how these little cartoons even decide what they are doing. All this before I have built a torch to hang on the wall. All this before the poop holes!

There’s a generational system, for example, whereby idiot babies grow into idiot adults. Visitors who appear will sometimes stay, relationships will form, and your eel-trapping fools will go on to make more eel-trapping fools, slowly growing your settlement. It’s a good idea. Good enough to make it the hook of the trailerbut in practice not deep enough to be the keystone of the game’s design, considering it takes a relatively long time for any of that to become meaningful.

There is satisfaction to be had in raising the clan. The reliably changing seasons offer a ticking clock to get your family stockpiled and ready for (very) tough times. I diligently got to work hollowing out shelter from a stony hill. I built a storeroom for food and a quarters for sleeping and a barn for animals. I sowed an oat field and crafted a flute, which young Anton played every morning before he even washed himself in the pond, such were his unknowable whims. I rubbed my hands with glee when I first opened the “skills” menu and discovered the means of structuring every person’s priorities. I made the children haulers. They move things. Everything else is a secondary concern.

But this is all something I have seen already, and in a better condition. Kilt flapping and tartan aside, it still feels far too similar to Rimworld, its own identity peeking through at a superficial level. That seem a silly thing to say given Rimworld’s own itchy fingers when it might come to influences. But Rimworld’s sci-fi people-pushing did something new in making a Dwarf Fortress you could play without learning a new ASCII-based language, and features surprisingly powerful storytelling machinery whirring behind the scenes. Clanfolk is a desaturated, rough-looking version of that same design goal, released nearly a decade later.

Ultimately, a fresh theme isn’t enough to get me invested in re-living the early access journey of a pawn management game, no matter how many Scottish highlanders muck themselves in front of their horrified children. I enjoy wallowing in failure, sure. Losing is, as always, fun. But I’ve already played a more complete, and more colorful version of this game to death.