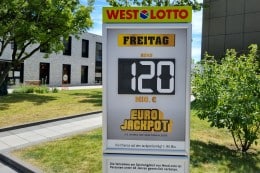 Essen/Muenster.
Next Friday, July 22, a mega jackpot of 120 million euros awaits all players for the first time. This is the maximum possible jackpot since March 2022. The Eurojackpot was previously capped at 90 million euros.

Many Eurojackpot game participants looked spellbound to Helsinki on Tuesday evening, July 19, when the current draw results were determined there. In the 15th draw of the current jackpot phase, the top prize category remained vacant.

The winning numbers 20, 23, 24, 37 and 43 as well as the two euro numbers 9 and 10 turned 13 players into high winners. In second place, four German players from Baden-Württemberg, Bavaria, Hamburg and Hesse were delighted with EUR 891,788. Further six-digit high prizes of 154,760.20 euros were paid out in third place in Bavaria, Hamburg, Rhineland-Palatinate, Norway, the Netherlands, Denmark and Finland (3 x).

The new maximum jackpot amount of 120 million euros will be reached for the first time next Friday, July 22nd. Previously, the limit was 90 million euros. In March 2022, for the 10th anniversary, there was a product change in the Eurojackpot lottery, which allows the maximum possible jackpot to rise above the magic threshold of 100 million. In principle, the previous system, that the jackpot is capped and cannot rise above the legally prescribed maximum limit of 120 million euros, remains the same.

Since then, there has been an additional second play per week on Tuesday. The jackpot rolls from one event to the next throughout the week. So from Tuesday to Friday. From Friday again to Tuesday.

The formula of the game has also been adjusted: the players continue to bet five numbers out of 50, but 2out of 12 (instead of the previous 2out of 10) is chosen for the euro numbers. The chance of winning first place is 1 in 140 million.

Last jackpot win in May

The last win in the first tier of the Eurojackpot lottery was 15 draws ago. On May 27, a player from Bavaria hit the jackpot and was happy to win 16.8 million euros. A three-digit million amount has only been paid out once: On May 20, an Internet tipster from North Rhine-Westphalia won over 110 million euros.

If you want to try your luck at the first 120 million jackpot, you can place your bet at the lottery acceptance points or on the Internet at www.westlotto.de delivered. Participation in the game is possible until Friday evening, 7 p.m. The acceptance deadline may vary depending on the federal state.

Participation from 18 years. Gambling can be addictive!