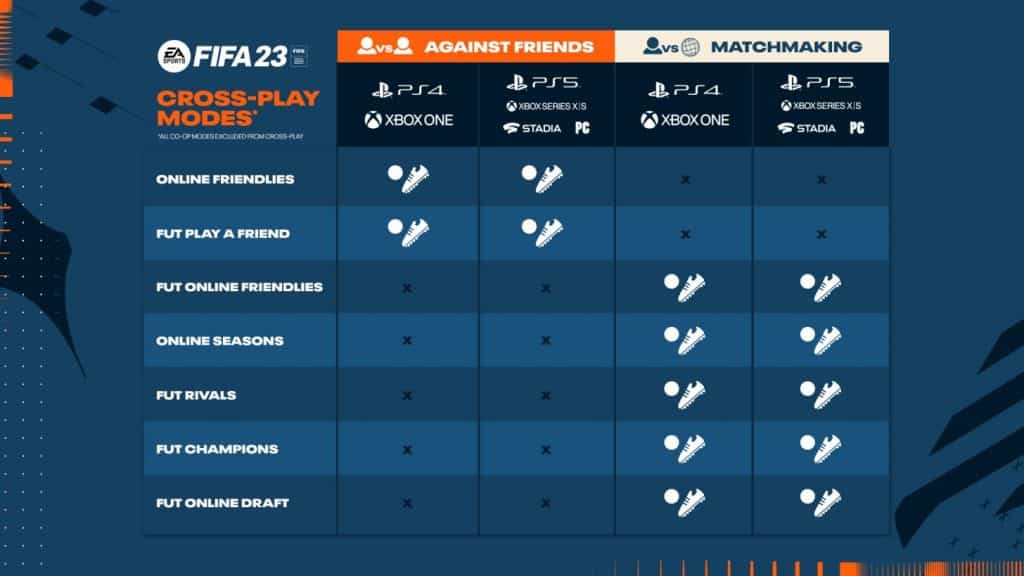 The FIFA 23 release is getting closer and now there is also first information about innovations in the game. We show you the most important ones.

When is FIFA 23 coming out? FIFA 23 will be officially released on September 30, 2022 for PS5, PS4, Xbox One, Xbox Series X|S, PC and Stadia. The Ultimate Edition will be available starting September 27th.

This is now known: In addition to the new trailer, in which, among other things, the revised version of the animation technology “HyperMotion” was shown, EA Sports also published some fresh information about what you can expect in the new FIFA.

The most important innovations that were presented today are shown here.

FIFA 23 Crossplay: Who can play with whom?

Crossplay can do this in FIFA 23: As EA announced, FIFA 23 will bring a crossplay component to the 1v1 modes. So if you want to pit your Ultimate Team against friends, it will be cross-platform.

Game modes above 1v1 seem to be falling further out for now though. That would affect pro clubs, for example.

In addition, there are different groups in crossplay that can play with each other.

The PC follows: The crossplay shows that the PC in FIFA 23 will follow suit after a lot of criticism last year and will have the same technical status as the NextGen consoles. In FIFA 22, PC players had to play a weakened version.

With crossplay, extended anti-cheat should also apply to the PC version. EA intends to provide more information here in the future.

New transfer market: Crossplay will also see a change to the transfer market in Ultimate Team. Instead of each platform having its own market, it now looks like this:

There is new content in FIFA 23 for two World Cups

The World Cup should play an important role in FIFA 23. But the fact that there are two world tournaments in one FIFA game is a novelty.

On the one hand, there is the men’s world championship, which will take place in winter in 2022. This post-launch period and around Christmas is also traditionally when FIFA spin-offs get the most attention and play.

Rumor has it that the World Cup will also bring new national teams into play.

The second World Cup is the FIFA Women’s World Cup 2023. It will take place next year from July 20th to August 20th in Australia and New Zealand. It also fits that Australian attacker Sam Kerr is featured alongside Kylian Mbappé on the cover of FIFA 23.

See also  This is the Honor Magic V, a foldable with Snapdragon 8 Gen 1 and three 50-megapixel cameras

Both tournaments should get a lot of attention in FIFA 23. In what form this will be the case, however, is still open.

Not only Sam Kerr on the cover shows that the women should play a bigger role in FIFA 23: Several clubs from women’s football will also be added to FIFA 23.

So far, you could only play the women with the national teams, or use your own female avatar in modes like Volta. With club football, another component is now being added.

What is HyperMotion? Players are already familiar with the term “HyperMotion” from FIFA 22. Here, real players were put into performance suits and then competed against each other. Numerous animations were then obtained from this data, which should ensure a more realistic gameplay in FIFA 22.

HyperMotion 2 should now be an extension of this system that brings additional animations and elements into play to make it even more realistic and varied.

But, downer: This feature will again only be available for the NextGen version – not on PS4 or Xbox One.

Are you looking for more information about FIFA 23? Then we will show you our overview of all information and rumors about the FIFA 23 release here.