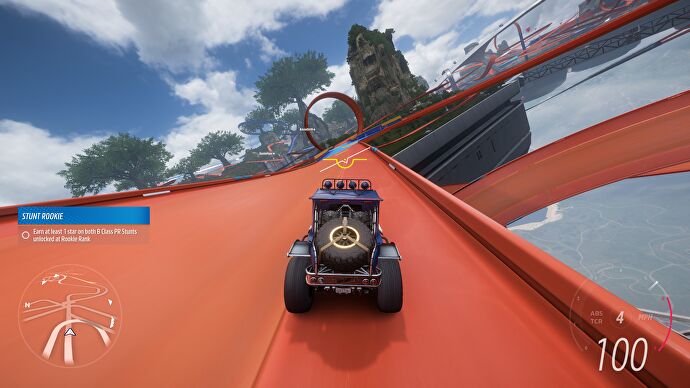 Forza Horizon 5’s Hot Wheels expansion is out and reader, I am in love. Firmly leaning – shoving, really – into the base game’s arcadey side, it’s a gleefully silly collection of physics-mocking race events across an eye-catching tangle of twisting, looping tracks. In between challenges, and flashbacks to covering the floor of my grandparents’ house with ribbons of orange plastic, I’ve also been testing how the DLC’s new skybound setting performs on PC.

Happily, it doesn’t seem any more demanding of your PC hardware than the base game’s Mexico map, and in places can run a little smoother. For testing I mainly used an Nvidia GeForce GTX 1070, which is naturally slower than the best graphics cards of more recent GPU generations but is nonetheless listed among Forza Horizon 5’s recommended system specs. That went in next to my test rig’s usual Intel Core i5-11600K and 16GB of DDR4 RAM.

In the base game’s benchmark tool, this GTX 1070 setup averaged 71fps using the High graphics preset at 2560×1440. There’s no Hot Wheels-specific version of this tool, so I used MSI Afterburner to manually measure average framerates in the expansion.

When free-roaming around the map, the GTX 1070 averaged a fraction under 75fps, so the good news here is that you can still use the original benchmarking tool to get a good idea of ​​how your PC will run Hot Wheels. Using the Ice Canyon Hazard Sprint race as a repeatable test, the GTX 1070 went even higher, averaging 77fps – nearly a full 10% faster than the benchmark result, despite the variety of snow effects.

There aren’t any new graphics quality/fidelity options in the expansion to try, though Hot Wheels does add a handful of accessibility settings to help some players deal with its more gravity-defying aspects. There’s a flight sim-style roll indicator that can be toggled on or off, as well as separate near and far chase cam FOV sliders that apply solely to the expansion. These both default to the highest setting – 65 – and re purely for nausea/disorientation prevention, as lowering them doesn’t really improve performance even if it means less onscreen stuff to render. Setting both FOV sliders to 50 only raised average performance in the Ice Canyon Hazard Sprint to 78fps, and you’re not going to notice that single extra frame.

Forza Horizon 5 Hot Wheels: the best settings to use

In the absence of more major performance differences between the Hot Wheels expansion and the base game, I’d say my original Forza Horizon 5 PC settings guide still applies to those who are coming in fresh. To recap, you can safely leave most of the game’s individual graphics options as high as you’re willing to go, with the following ones tactically lowered:

This will provide a handsome performance boost without ruining Forza’s polished aesthetic, even if that polish is now being applied to big toys. When I’ve been playing, I’ve also left both FOV sliders on 65 and turned the roll indicator off, though again these are accessibility features, not performance tools – and it’s good that the options are there for anyone who needs them.