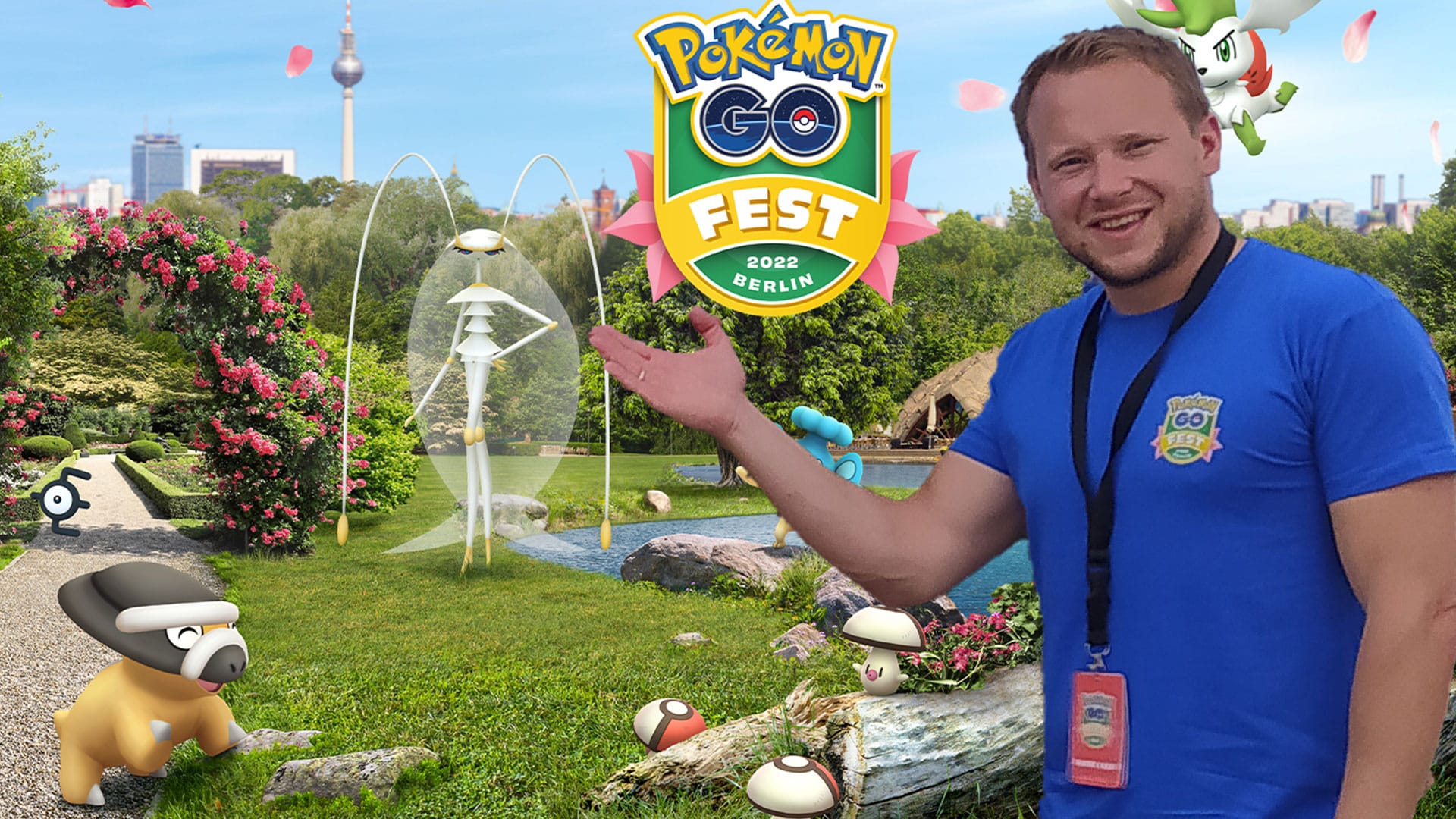 Pokémon GO is currently hosting a number of live events, such as the upcoming GO Fest in Seattle. We at MeinMMO spoke to Niantic and asked if there would be more such events soon and if they were also planned for Germany. We’ll show you all the answers.

What kind of events is it about? While Pokémon GO regularly features themed events that you can participate in from anywhere in the world, Niantic has finally brought live events back this year.

For example, Pokémon GO held a huge GO Fest in Berlin on the first weekend in July. The participating trainers had the opportunity to meet like-minded people and caught a total of 14,000,000 Pokémon on site and traveled 303,000 kilometers (via pokemongolive.com).

But what about future live events? What is planned? And can the German players look forward to such an event again? That’s what we wanted to know in the Niantic interview and asked Philip Marz, Head of Regional Marketing Pokémon GO (EMEA), about the GO Fest in Berlin.

After Pokémon GO had to restrict itself to holding events on site in the last two years due to the pandemic, the GO Fest in Berlin has been a major live event in Germany for a long time.

Countless trainers took this opportunity and traveled to the Britzer Garten to play together and enjoy the unique atmosphere. And while the next live event in Seattle is already in the starting blocks, we wanted to know if there are any other live events planned in the future, especially in Germany.

Are more live events planned? In the interview, Philip Marz told us that events are one of the core principles of Niantic, which rests on its 3 pillars, movement, discovery and real-world encounter. Live events will therefore continue to be an integral part of Pokémon GO in the future.

Niantic is keen to make the widest possible range available to the community, where the trainers can meet and play together. Specifically, this is what Marz told us:

Events are at the core of Niantic’s mission, which is based on three principles, namely: movement, discovery and real-world encounter. And of course nothing is better than offering a guided framework for this, with the events that we do, regardless of how big they are, and then making them accessible to the community as well as possible and as broadly as possible close.

Will there be new formats? There are now several forms of live events in Pokémon GO. The MeetUps for the Community Days were introduced in March. Although these offer the trainers a smaller framework than, for example, the GO Fest, they still invite you to play together.

According to Marz, these events will continue to be held in the future. For example, there will be another GO festival in 2023. In addition, Niantic is also working on new event formats, such as the GO Tour. This should therefore also get live events. Unfortunately, Marz was not able to tell us in the interview when and where these will take place.

Of course, this can vary greatly and have different dimensions, such as the GO Fest. This is of course the most exclusive event format, which we deliberately reduce to once a year and we can already look forward to it being there again next year.

It’s also the case that other event formats are being worked on, such as the GO Tour on a global level, basically at first. The locations have not yet been defined where that will be. But we also try to create regular opportunities for the community to act according to these three principles.

And then, what we introduced recently, of course, or in March, are the Community Days, where we basically created a smaller platform, regardless of whether it was in the real world or the virtual activation. But just to say ‘Hey, if you want to meet like-minded people, this is the place to be’. And that is definitely something that we will also push for the next few months.

Will there be live events again in Germany?

Yes, according to Marz, Germany is an “extremely important market” for Niantic, which is why there will be more live events here in the future. However, the size of the event varies, which is why large events such as the GO Fest should remain exclusive and thus be limited to once a year. However, he has not yet been able to tell us when the next live event will take place in Germany.

And Germany is basically an extremely important market for us, also a big market. That said, it will always be our aim to always and regularly provide a basis where the community can come together, exchange ideas and enjoy a shared gaming experience.

Which German cities would be possible? After we were given hope for further live events in Germany, we wanted to know more about it and asked which cities were actually on the shortlist.

But according to Marz, that’s not so easy to say. The big events, like the GO Fest in Berlin, naturally also require a large area.

In addition to being of the appropriate size, the venue must also meet various other criteria, such as sufficient accommodation, the potential for discovery and good accessibility. This limits the choice of cities in Germany. So he says:

There are, of course, cities that one is always flirting with. If you were to ask me personally, in the end it will always be the top five, because of course we also try to use the radiant effect of these cities a bit. And there Berlin, of course as the capital with a very high global appeal also because of the uniqueness of Berlin itself, already stands for itself.

And apart from that, there are of course other cities like Munich, Frankfurt, Düsseldorf, Hamburg, which in principle always define the framework for the area in which we are looking. Of course, it is very important for the live events that we implement that they are accessible, that they offer the opportunity for tens of thousands of players to stay overnight in the same place, that the cities also have sufficient potential for discoveries, where we come back to ours principles are.

That means there are of course one or the other new city that we are looking at, but also old familiar ones, because we are of course primarily driven by the location in which we want to implement the whole thing in the end. And the fact is that we are very limited. And great parks like the Britzer Garten or Westfalen Park, which unfortunately can be counted on one hand, which then meet all our requirements and at the same time are also available when we need them.

But basically I can say that you can definitely look forward to something like this happening again. And I’m quite sure that we will continue to create great and special experiences for the community in the future, including in Germany. Where that will be exactly, I will of course not reveal at this point in time. Can’t say in detail either, but that’s definitely what we’re striving for.

Marz himself therefore favors the Big 5: Berlin, Munich, Frankfurt, Düsseldorf and Hamburg. In the interview, however, he did not want to tell us exactly where it could lead to. According to his statements, the German coaches can still look forward to great experiences in the future.

What about hybrid events in the future?

During the last few months, Niantic has primarily relied on so-called hybrid events. The Community Days are a good example of this. Since March, it has been possible for the trainers to play the event from home or any other place without any disadvantages, but they can also meet up with like-minded people at the so-called MeetUps.

Since, according to Marz, Nianic now wants to focus more on live events again in the future, we wanted to know from him how the hybrid events are doing.

Will these be preserved? As Marz explains to us in the interview, during the pandemic Niantic understood that the trainers want events that everyone can participate in, even if they don’t want to or can’t travel to another location. Hybrid formats will therefore continue to exist in the future.

However, it is also very important to Niantic to bring the local community together, which is why they will continue to prioritize live events. Specifically, he says the following:

The GO Fest this year is a series of events that consists of five sub-events, with two global events embracing the three live events, I would say. In order to do justice to the claim that we can both do justice to the global community that may not be able to travel, does not want to travel, does not have the opportunity to attend these events locally. That’s something that we certainly saw, understood and learned during the pandemic and are very, very happy to adapt so that we can say ‘okay, everyone can participate’.

But at the same time it is also extremely important to us, because Pokémon GO is also made for that, that you can have this great and unique experience together on site, as we are now experiencing in the Britzer Garten, and therefore also the selected event locations then define in the different regions, to also define a community there, I would say specific and then a relevant one at the regional level [Event] or to offer a live event that you can visit with limited effort. And here it is that we have definitely found that the mix makes the difference.

It’s similar again with the Community Day activities on a different level. But that’s definitely something, too, when it comes to the issue of accessibility and inclusivity. In this context, inclusivity really means making it possible for many to participate, regardless of whether you are there now. Then that is definitely something that we also take into account for our future planning.

The focus is always on saying you do it together and not at home alone on the couch. And that’s why, I would say, it is always prioritized by the framework conditions and maybe made a little more attractive than other things.

If we now think in terms of the Community Day framework, it is of course completely different at the GO Fest, so the differences are then significant, also in the physical structures, but also a bit in the things that you then have, for example in the habitats can experience or something, because we have to find the right balance there too. But it is definitely part of our planning here.

Accordingly, Niantic is currently trying to find a balance between global events and local events. When the next big live event awaits us in Germany and whether this will then also be made accessible in hybrid form remains to be seen for the time being.

How do you like the prospects for the future live events? Would you take part in one if it were in Germany again? And which cities do you prefer for such an event? Feel free to write us your opinion here on MeinMMO in the comments and exchange ideas with other trainers.

This was my first time at such a large live event in Pokémon GO. My conclusion: The GO Fest in Berlin was absolutely brilliant and I would take part again in a heartbeat.