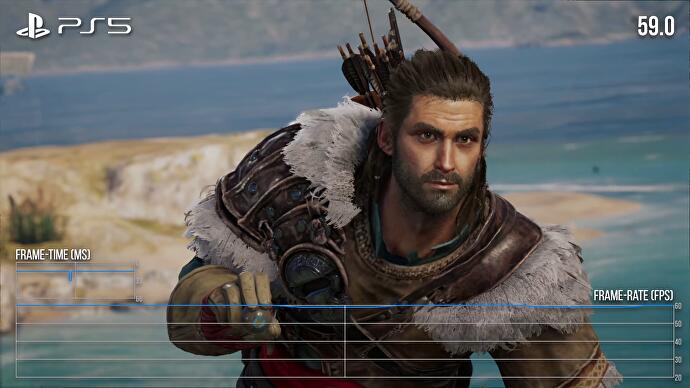 Assassin’s Creed Origins and Assassin’s Creed Odyssey offer stunning open worlds based on Egyptian and Greek history, demonstrating fantastic attention to detail. Now it’s possible to experience these worlds on console at 60 fps, twice the frame rate as before. Harnessing the power of the new consoles for smoother gameplay definitely sounds tempting, but with the sheer scale and complexity of these titles, is a stable 60fps frame rate really achievable?

Looking back at the versions released in 2017/2018, Origins and Odyssey are still visually stunning. The lighting is nicely saturated, with strong volumetric effects and great global illumination, while the cutscenes have a solid depth of field that fades into nice bokeh shapes, all backed by robust temporal anti-aliasing (TAA) that gives the titles a clean, cinematic quality. Even compared to contemporary open-world titles, there’s little to complain about, perhaps a few weaker textures in places, but that’s a minor blemish in an otherwise flawless work from the developers at Ubisoft.

The switch from 30 to 60 frames per second is the main feature here and it is implemented with surprising reliability. For the most part, the Series S, X, and PS5 perfectly maintain 60fps with no dips or drifts. There are a few exceptions though, oddly enough most of these apply to all current-gen devices, from the powerful PS5 and Series X to the more limited Series S.

The first criticism concerns the real-time cutscenes of these games. Most obviously, each camera cut duplicates a frame, which creates a slight stutter. That was also present in the last gen versions and may be intentional. If you give the player before a camera cut shows a double frame, one can buffer a frame in advance to generate the necessary information for the TAA, so that the frame after the camera cut can have a high quality AA instead of showing edges. However, based on the results, it’s not clear what’s happening here, as the frames look rough after a camera cut and it takes several frames for them to settle down again. There are also some obvious issues, such as the opening scene in Origins running at 50-55 frames per second on all platforms. But I haven’t seen any other scenes in either game that fall into such a range.

Second, some elements don’t update at a full 60fps. Some of the physics animations in Origins stand out, for example the camel riding cloth animations run at half rate, as well as the cloth animations for banners and certain NPCs. The normal maps of water surfaces in Origins also appear to update at half speed. This type of issues also occurs with other 60fps patches or system-level improvements, as some elements in the original code are set to update at a specific rate, and applying a tweak to increase the overall frame rate cannot improve those elements .

Third, the game’s pre-rendered cutscenes still run at 30 frames per second, which contrasts with the 60 frames per second offered elsewhere and takes the player out of the experience a bit. Annoyingly, some of the pre-rendered cutscenes also run with really horrible frame-pacing issues, creating an almost unbelievable level of stuttering. Luckily, most of the cutscenes happen in real time.

Finally, there are some occasional performance issues in combat. Odyssey’s opening sequence, which features a massive battle involving many dozens of characters, was the most obvious culprit in my testing. This sequence is very demanding and occasionally results in dropped frames on all systems. Most other fights run smoothly, although it’s possible that larger fight sequences later in these titles might have similar issues.

There are also some platform-specific issues. For example, on the Series S, Odyssey’s real-time cutscenes run at 30 frames per second, which is a bit strange considering the cutscenes in Origins run at 60 frames per second. The Series X also generally suffers a little more from performance drops than other systems. I’ve noticed that the system suffers from framerate drops on a handful of occasions that other consoles don’t, although this is mostly limited to cutscenes and gameplay is largely unaffected.

While that’s a long list of minor issues, in practice they’re really successful 60fps upgrades. Aside from a few minor animation issues, the gameplay is very smooth and the annoyances of the cutscenes are easy to overlook. Currently, both games run at a solid 60 frames per second on current-gen consoles. That means a huge improvement in combat feel, going from a choppy 30fps on last-gen devices with zero motion blur to 60fps with much more temporal detail. Viewed side-by-side, it’s clearly a big improvement, and these titles benefit enormously from the doubling of the framerate.

While the 60fps update comes with some limitations, the results are solid, but have the graphics changed at all? no I’ve tested the games under a variety of conditions and the underlying graphics settings appear to be the same as the last gen versions. That’s no surprise, but there are some interesting results in terms of visual clarity. After all, these are patches for the old versions of the game, which limits how these versions work. Essentially, every current-gen device inherits its resolution range from the last-gen code. All versions use dynamic resolution, but the peak value depends on the platform. There are big differences here.

In practice, the three consoles show a kind of clean progression, with a roughly even difference in clarity when switching back and forth between the three versions. The Series S looks a bit fuzzy, the PS5 is more detailed and stable but still a little rough, and the Series X usually looks pretty 4K-like, with lots of fine detail. If I had to guess, I’d say that some of these differences probably stem from variations in maximum resolution, since the TAA upsampling that seems to be at work here works better when sampled to a higher resolution.

The difference between the PS5 and the Series X is a bit unusual. Normally we’d expect the two devices to be a bit closer together, but the PS5’s much lower resolution at the top end detracts from the whole effort somewhat.

For fans of the series, these new updates are a great reason to revisit the worlds of Origins and Odyssey. Both games are still holding up very well, and increasing the frame rate to 60 fps greatly improves the smoothness of the animations and the responsiveness of the game. While the eighth gen rendering paradigms are old hat by now, I was very pleased with the experience provided and indeed these patches are close to what one might expect from a full current gen console release.

Assassin’s Creed is a hugely popular series of games and given the age of AC Valhalla, a new title is sure to come soon. Hopefully this game will take full advantage of current-gen console technology, but for now these improved last-gen editions are satisfying. It’s an excellent opportunity to immerse yourself in one of the most compellingly realized open worlds in video games.