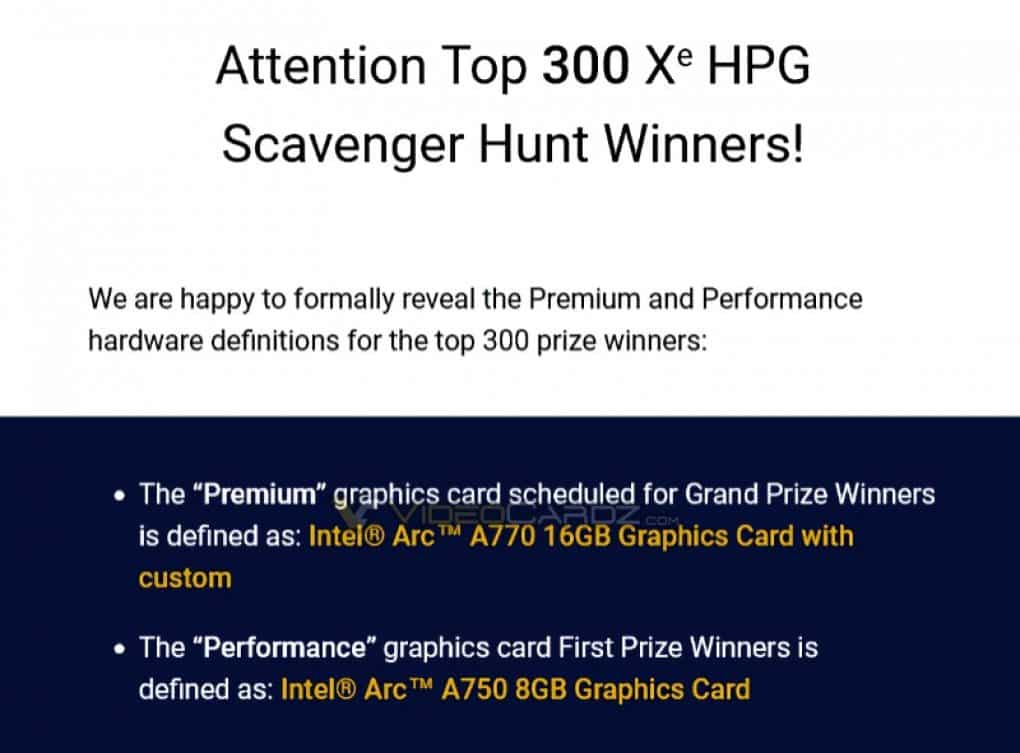 07/24/2022 at 11:00 am
from Valentin Sattler –
Intel is finally handing out the prizes for a scavenger hunt held at the turn of the year – and at the same time confirming the memory expansion of the Arc A750 and Arc A770.

Earlier this year, before the first Arc graphics cards for notebooks were introduced, Intel organized a scavenger hunt as a promotion. At the action “Xe HPG Scavenger Hunt“, which ran from last October to this January, players could search for clues scattered by Intel, send them in and win one of 300 Arc desktop graphics cards. Now Intel has finally revealed exactly which models are involved, and at the same time revealed more details about the new graphics cards.

According to reports from Videocardz and Wccftech, Intel has published an announcement in an insider community on Discord that lists 100 Arc A770 and 200 Arc A750 graphics cards as prices. These graphics cards will soon be delivered to the winners. According to the statement, Intel allegedly just received the corresponding batches itself, which, after final tests, should now go to the winners and the usual hardware editors. The latter can then start working on the launch reviews.

“We are all very excited to finally be delivering the Xe HPG scavenger hunt prizes this summer as the product is now beginning to take shape. Below are photos of the Intel Arc A750 graphics card and its packaging arriving at Intel offices and for final tests before sampling by the press is ready.

Conclusion: The launch of the Intel Arc A7 desktop products and the prizes earmarked for this competition are now on the horizon!”

The memory expansion of the Arc A770 is particularly surprising: With the competition, such a large capacity is only reserved for the Radeon RX 6800 and Geforce RTX 3090 graphics cards, which are expected to be much more expensive. Fortunately, with the upcoming desktop launch of the Arc graphics cards, you won’t have to wait too long to find out how the Arc A770 can still benefit from the high storage capacity.