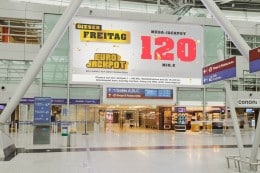 Meal.
On Friday, July 22, a player from Denmark won the first prize category in the Eurojackpot lottery draw in Helsinki.

The hitherto longest jackpot phase of the European lottery Eurojackpot went over a total of 16 draws.

The winning numbers in the Helsinki draw on July 22nd are: 1, 11, 17, 19 and 33 as well as the two euro numbers 3 and 7. This means that 120 million euros will go to Denmark. Record! Not only in the Eurojackpot lottery, but also Danish national record for a lottery win.

The most recent goal in first place was eight weeks ago. On May 27, a player from Bavaria received an amount of 16.8 million euros. A three-digit million prize has only been paid out once in the Eurojackpot lottery: on May 20, more than 110 million euros went to North Rhine-Westphalia.

Eight other players hit prize category 2. After the jackpot from the first prize had already overflowed in the draw on July 22, an additional jackpot of EUR 19 million was played in the second prize category. This results in more millionaires. 2,985,189.10 euros each go to Baden-Württemberg (2 x), Bavaria, Berlin, North Rhine-Westphalia, Rhineland-Palatinate, Norway and Hungary.

Record due to product change in March

Since March of this year, the 10th birthday of the European lottery, the maximum possible jackpot can increase to up to 120 million euros. Before that, the limit was 90 million euros. Since then, there has been an additional second play per week on Tuesday. The jackpot rolls from one event to the next throughout the week. So from Tuesday to Friday and again from Friday to Tuesday.

See also  Bluetooth adapter for PS5 & PS4: What you have to pay attention to when buying

Next chance next Tuesday

The next chance for a main prize in the Eurojackpot lottery is tomorrow. On Tuesday, July 26, the jackpot starts again with ten million euros. Participation in the game is possible until 7 p.m. in the lottery acceptance points and on the Internet at www.westlotto.de. The acceptance deadline may vary depending on the federal state.