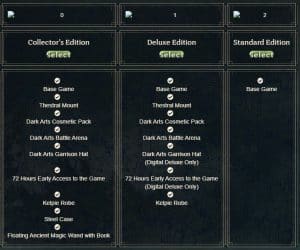 A list of the contents of the Hogwarts Legacy Collector’s and Deluxe Editions has now been spotted online.

A Reddit user has now managed to take a look at the editions and content of the game Hogwarts Legacy via the official website of the game.

The user BattleDashBR was able to use the source code to create a enable previewwhich unveiled a Standard, Deluxe and Collector’s Edition along with a listing of the contents.

Much of the content given there coincides with an earlier leak from last month.

Please note that Warner Bros. has not yet officially announced the editions and its content and there may still be changes.