“Many times more than Season 1” – How much does 7 vs. Wild season 2 cost in production?

In his latest video answers Fritz Meineke on the ten most frequently asked questions from viewers to the second season of 7 vs Wild. Among other things, the topic is discussed difficulty level compared to the first season and the factor nutrition – especially considering the fact that only one item will be allowed in season two (only for Fritz & Otto). The question of the costs for the entire production is also spanned. 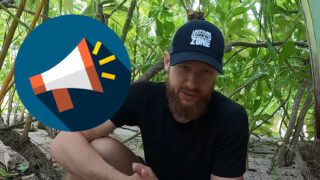 7 vs. Wild Season 2: Fritz Meinecke comments on criticism of the balancing system

Surely the survival expert will arm himself for “7 vs. Wild” again. However, different from last time since he’s the new one Location – unlike Sweden, where he knows his way around – doesn’t know. He I’m currently working a lot on the theory, reads and watches videos. Sometimes he goes into practice; snorkels, watches the fish and their behavior.

Meinecke is in the video on a tropical island, this one according to their own statements, however, differs greatly from the 7 vs. Wild location in Season 2.

“This is paradise and where we’re going is green hell.”

Meinecke about his chances of success and nutrition

Meinecke assures that he will do his best in Season 2. But let him be profit less importantthan to endure the seven days. Above all, give him the topic Drinking water cause for concern, which is why he hopes for rain or springs. The special challenge here, however, is that this time only one item allowed is.

This makes it harder to boil the water. Food is less important than drinking water. He hopes for coconuts and thinks that the fishing exciting could be.

Why wasn’t the shooting period for Robert postponed?

The requested Environmentalist Robert Marc Lehmann had to be due to its own production Cancel participation in 7 vs. Wild. Many viewers wanted to know why the shooting date was not postponed to allow the marine biologist to attend. Statement by Meinecke: So be it a huge project, which cannot be postponed because of one person. Among the factors he mentions are the Flight organization and the various permits required.

How much does 7 vs Wild cost in production?

How much money will 7 vs Wild season 2 cost? One of the most exciting questions revolves around the production costs. How much does the series cost to produce? While the first season should not be underestimated in terms of effort and costs, the second season moves in completely different dimensions.

According to Meinecke, season 2 will be around a “Many times more than Season 1” costs.

“It’s a very, very juicy good six-figure amount, let’s put it that way. And as of now, it’s not finished yet. do you know what i mean? “

Every day more things are added that would cause additional costs.

Some reasons for the higher cost:

Meinecke also emphasizes that viewers will see soon enough why the costs are so much higher this time. So we can look forward to a big production and an exciting location that will hopefully justify the high costs.

How does Fritz Meinecke pay for the high production costs? A “juicy good six-figure amount”as Meinecke puts it in his video, should be at least about the 400,000 to 500,000 euros extend. However, it is likely that the costs will be even higher after the project is completed. At this point, however, we can only speculate at the moment.

Of course, Meinecke and his team are trying to refinance the whole thing. For this reason, various sponsors are also on board for season 2. Added to this is the income that the survival expert earns and will earn with his videos. Since the individual videos of the first season in particular are all in the millions, decent income should also be generated here.

Even if the costs are likely to be much higher than for Season 1, with good marketing Fritz Meinecke will probably not end up with a minus from the whole thing. The large reach, which will give Meinecke’s two YouTube channels a significant push, should not be forgotten either.

More facts at a glance:

“Personally, though, I’m still a fan of the Solo Edition simply because of that isolation. Because that does something to you personally and pushes you more to the limit than if you somehow go through the whole thing together,” according to Fritz Meinecke

Garmin Philip
See also  If you want a cheap alternative to the Nintendo Switch Joy-Con, these options only cost 33 euros