The announcement of Rollerdrome caused mixed feelings: the trailer looks reminiscent of Sable and the basic premise seems strange. Roller skating combined with a third-person shooter sounds like a cheap multiplayer mode at first, but it’s actually a very interesting and entertaining single-player concept.

British studio Roll7 recently proved with OlliOlli World that they have no trouble capturing the essence of skating in a video game. What previously worked well for skateboards also works in Rollerdrome on roller skates. The action takes place in the year 2030, in which the twentieth tournament of the Rollerdrome brand is being celebrated. In this alternate version of our world, violent sport has evolved into a mass spectacle. In short sections we get a glimpse of what is happening behind the scenes and learn that all that glitters is not gold. The storyline is exciting enough to keep us engaged, but doesn’t overpower the core of the game – the arena battles.

That’s what you do in Rollerdrome

We have several weapons to choose from that we unlock as we progress through the game.


Within the tournament we have to prove our skills in a given order at different locations. That means performing tricks, shooting enemies and of course surviving. In addition, we have to master a certain number of challenges or tasks in each round in order to progress in the tournament. For example, it is important to do the right tricks at certain points or to kill a certain type of opponent with the right weapon.

See also  Star Wars - The Acolyte: Characters from KOTOR are said to appear

At first we only have double pistols, but as the events progress our arsenal expands, for example with a shotgun or a rocket launcher. All weapons have their own advantages and disadvantages in terms of range, damage and rate of fire. The balanced mix ensures that no equipment becomes obsolete and different playstyles are possible.

Aiming and hitting are usually not a problem, even if you are basically moving at high speed. While some weapons have an automatic aiming mode anyway, you can always switch to a slow-motion mode.

Although this is limited in time, it has a very short cooldown, which means that it is basically always ready for use. Equipped with this ability, you can not only take very targeted and strategic shots, but also take a short break to orientate yourself. 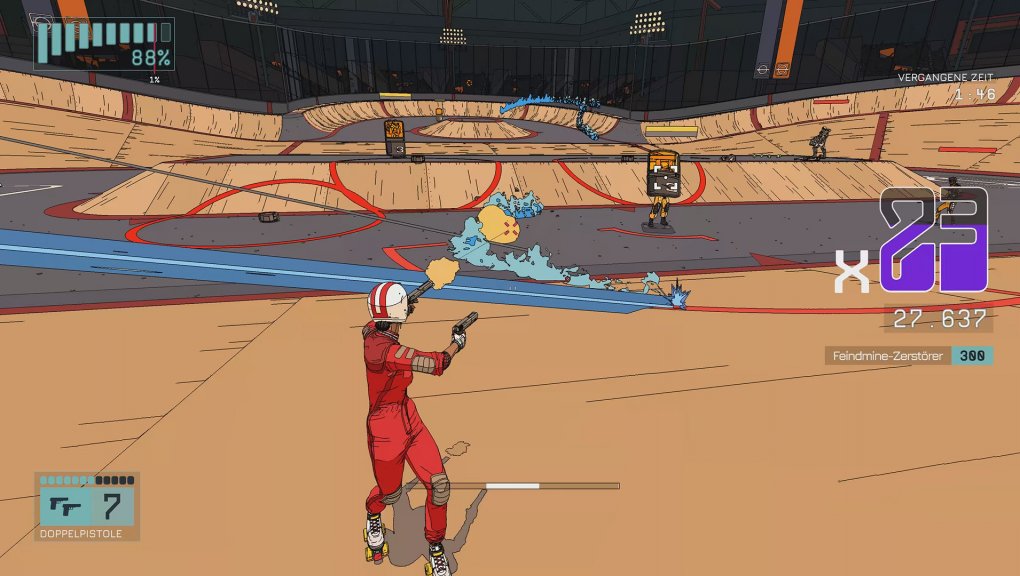 With many opponents and a lot of dangers on the ground, it gets confusing.


This function also helps when things get too hectic elsewhere, after all we not only shoot at opponents, but also have to dodge their shots, punches, laser beams and rockets. Yes, there are a variety of enemy types in Rollerdrome, each with their own weapons, abilities, and mechanics.

Some generate a shield when they take damage, others teleport, and luckily some are easy to shoot down. The type and strength of the attacks are also completely different from each other and so we always have to weigh up whether we prefer to kill many easy opponents or concentrate on the larger dangers that remodel the playing field into a devastating danger area.

next page
next page
See also  XboxDynasty Stream: SnowRunner at 8:30 p.m. on Twitch