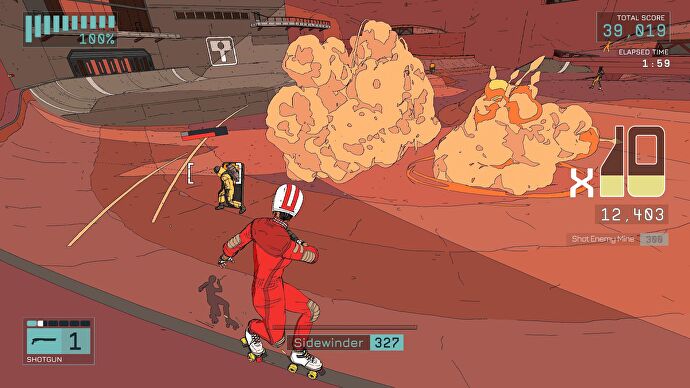 Bullet time has gone in and out of fashion, yet it remains accepted as cool by everyone who has ever knocked back a fistful of painkillers and murdered half of New York City. Rollerskating has gone in and out of fashion too, and anyone who’s glanced at Instagram for the past couple of years will know which stage of the wave we’re at. Rollerdrome fuses these two oscillating trends in the story of a rollerskating hotshot with a vendetta against human heads. I got a look at the first few levels and, so far, it’s a flashy spin on the slow-mo gun fight.

It is the year 2030, and the humans of earth have become obsessed with a dangerous new sport. The Rollerdrome championship sees roller skaters facing off against hordes of chumps in colorful death parks, all televised by a profit-obsessed corp. As a newcomer to the championship, Kara Hasan, your task is to stay alive and look rad.

And rad you shall look. This game was first spotted in the wild years ago as a bunch of killer gifs from an independent developer that made everyone stop scrolling, droop their eyes with with surfer dude respect, and say: “sweet”. It’s been fleshed out and flashed up since then, with studio Roll7 slurping up the prototype (and presumably its dev) to create what is now Rollerdrome. You must understand how happy at the end of this is. Prototype GIFs are like baby turtles. Many thousands do not survive.

As a devotee of the studio’s other radical outings in OlliOlli, I already look with an approving nod towards any flow state bloodsport they should care to develop. So far this delivers smiles and pleased thumbs. Arenas are smooth, undulating skate parks with a roller derby polish. They are filled with ramps, quarter pipes, rails, and bad dudes. There are snipers who track you with laser sights, for example, and bat-swinging idiots who mostly just stand around waiting for you to come near them.

See also  Destiny 2: Weekly Reset on 6/28 - The final nightmare will be vanquished

These are the “house players”, desperate trinkets paid to gun you down before you can set a high score by filling their guts with buckshot. It starts fairly straightforward, just a few ranged enemies to prioritize. Those laser pointers will turn white in the last second before a sniper shoots, and much of the challenge involves carefully dodging these bullets. But the roster of enemy types quickly ramps up as levels unlock. There are teleporting dweebs with devastating laser beams, riot shielded goobers with deployable mines, spider robots with fast tracking missiles. Arenas will soon become very busy.

Which is why you need that slow mo. A simple trigger pull puts you into a very generous bullet time, letting you hose down incoming rockets or launch a grenade at a distant dork. Provided you have the ammo. You see, to reload you must perform tricks. No nose grabs, no shotgun shells. It’s designed to encourage you to constantly alternate between triggering happy death-dealing and sick backflips. Until eventually you are doing both at the same time, which is where the proud feeling of “damn, that was cool” kicks in.

Add in a list of challenges that accompanies every arena (kill a house player while nose grinding, perfectly dodge two mines, etc) and you get a game that feels purpose-built to generate five-second gameplay clips of you looking like a roller disco -ing John Wick. There’s the satisfaction of going back to old levels to mop up those challenges you missed, and finding new ones, better ways to clean up your score: by wall-riding into the arena, by chaining kills into a huge corpse-creating combo, by saving some explosive barrels for just the right moment, and BOOM.

So far, I like what I see and I like what I feel. It has a Tony Hawk’s simplicity to it. Drop in, complete the challenges, set a high score, move on to the next level. Leaderboards are there too, probably with the intention of seeing the most devoted barrel exploders sticking around. But aside from that, its focus on the minute-to-minute muckabout is refreshing. It feels like a game that almost could have existed years ago, if the right person in the games industry had been playing THUG all day and then put on a John Woo picture. Kind of a “Why didn’t I think of that?” game. Of course roller skating with guns would be a blast. Of course!

There are neat story bits between levels too, where you get to walk around locker rooms and media offices in first-person, poking around in your competitor’s belongings, eavesdropping on reporters, and reading the sports pages, which are quickly overtaking the pages of anything else in the news. With these sections you get a sense of a corporated world outside the arena quickly becoming all about bread and circuses (and even then, not much of the bread).

I have my reservations, of course. I’m less keen on any arena with pitfalls, for example. To leave a quarter pipe you can hold forward to launch out of it, similar to the Tony Hawk games of old. But this means a single over-enthusiastic hold of forward on the thumbstick can see you plummeting helplessly into the void. It’s not a huge deal, you’ll teleport back into the arena with a small hunk of life shaved away. Yet it’s not the health bar I grieve for in these moments, it’s the speed, the flow. You have to quickly learn to be careful of ramps near the edge of these stadiums, and I found this sense of caution got in the way of letting loose in the same way I did for many of the other maps.

But overall it’s a smooth start. I have a hope that later levels will hold even more craziness that isn’t present in these early ones. I have yet to see the giant spider bot that was teased four years ago, for instance. But whether or not that particular gif hatchling made it to the final build ocean, a fully grown Rollerdrome is about to emerge in August. Judging by what I’ve played, I’ll be happy to see it.