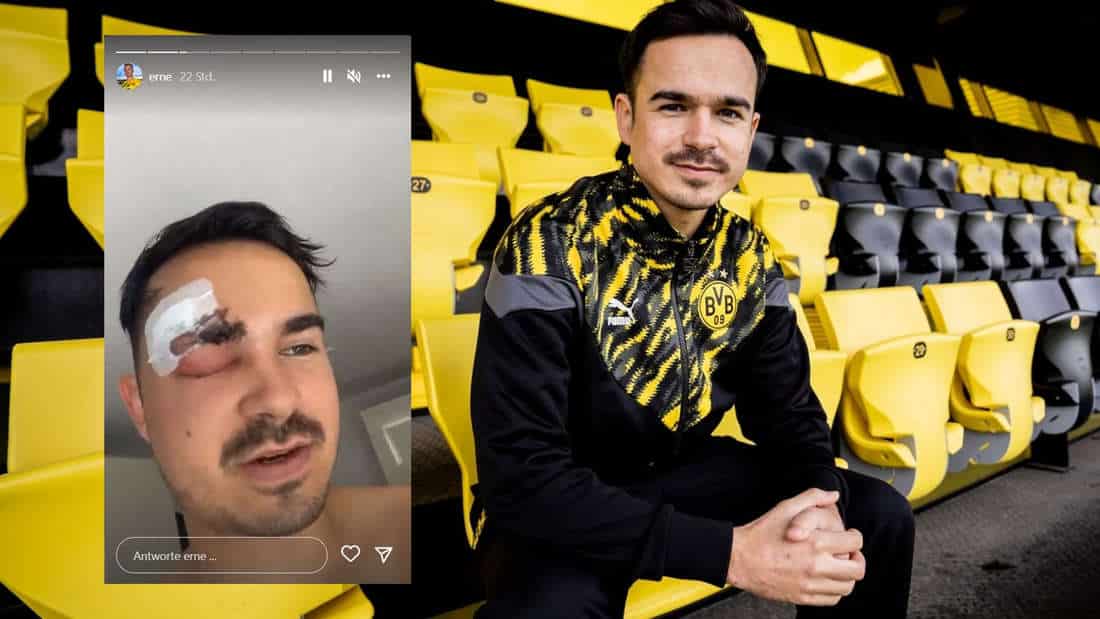 This goal celebration backfired: FIFA YouTuber Erné wanted to celebrate like Ronald, but was injured and almost went blind.

Update from 07/27/2022: Erné is now in touch with his fans again. This time with some better news too, as the YouTuber has finally been released from the hospital. As he announced on Instagram, he is already doing much better and he can see again in his injured eye. Nevertheless, Erné must continue to be treated and make sure that the inflammation does not get worse again.

Original message from 07/25/2022: Dusseldorf – Cristiano Ronaldo’s goal celebration is legendary. Even beyond the football cosmos, everyone probably knows the iconic jump for joy. But this jubilation could now be fatal for a German Fifa professional. The BVB content creator Erné wanted to do the same as the Portuguese international and try out the celebration. Unfortunately, things didn’t quite go according to plan. The YouTuber appeared on Instagram with a severely swollen eye, and he now had to go to the hospital. According to the doctors, Erné could even lose his eyesight.

Serious injury after goal celebration – Erné is in the hospital

That happened: The FIFA YouTuber had an accident while trying to imitate the well-known Ronaldo goal celebration. Erné fell on his face so unhappily that his entire left eye is swollen. He documented everything on Instagram for his followers. At first he joked that Ronaldo was supposed to visit him now, but his condition quickly deteriorated. “39 degrees fever, tachycardia, the eye is getting bigger and bigger. I have to go to the hospital now”.

As the FIFA professional informed his fans, his injury had become infected. This led to severe pain and a high fever. Erné was quickly taken to the hospital, where the entire swelling had to be cut open because of the inflammation. Due to the severity of his inflammation, the YouTuber was given antibiotics venously. The shocking news followed from his doctors: Erné may lose his sight in his left eye.

If I’m unlucky, I’ll lose my left sight and be blind in the eye because the inflammation is too severe.

Here’s how Erne is doing: In his posts, the streamer makes it clear how bad he is right now. “I’ve never felt as bad as now in my life”. The YouTuber finds it difficult to cope with the fact that he may lose his sight. He has to remain in the hospital for another three to six days and will be under surveillance during this time. In his last post, Erné gives his fans some hope, because after his swelling was cut open again, he seems to be doing a little better.

See also  Final Fantasy 7 Remake Part 3 officially confirmed, when will it be released?

This is Erne: Erné is a German FIFA YouTuber who founded the FeelFIFA channel in 2011 together with his friend Stefan. On this, the two regularly upload a wide variety of videos about the football simulation from EA. Erné has also been working as a content creator for BVB since 2020. There he develops fun formats for the fans and actively shapes the club’s eFootball commitment. We can definitely look forward to some videos from the YouTuber for the release of FIFA 23.

After Erné’s accident – his fans are behind him

This is how his fans react: After Erné showed his injury on Instagram, many fans expressed their sympathy. “Unfortunately I can’t reply to everyone, my inbox is exploding, but I appreciate all your kind words and thoughts. You all give me strength”. In the next few days, his followers will also have to do without the YouTuber’s entertaining streams, but everyone should understand that.