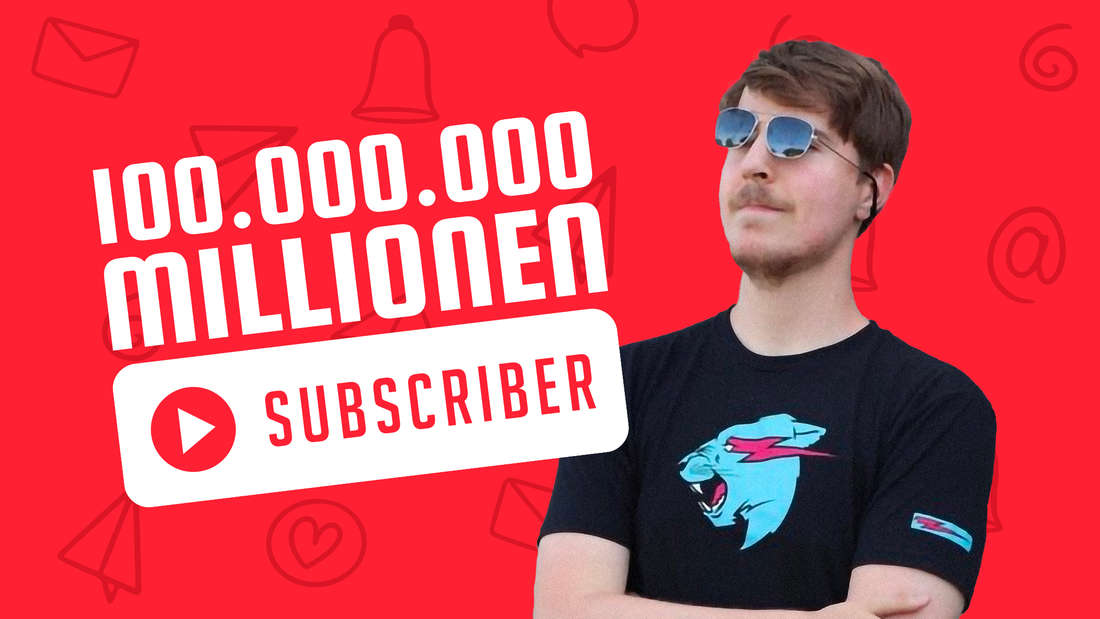 MrBeast celebrated his 100 million subscribers on YouTube live in the stream. Only four channels worldwide have more subscriptions to the video platform.

Kansas, USA – American YouTuber James “MrBeast” Donaldson is ceremoniously taking over the helm of YouTube. Before him, only four other channels could reach the incredible milestone and celebrate 100 million subscribers. In a live stream, MrBeast addresses touching words to his fans, while tens of thousands of subscriptions are added every minute. This is how MrBeast reached the gigantic number.

What happened? James Steven Donaldson aka MrBeast reached 100 million subscribers on YouTube on July 28th. The philanthropist streamed his reaction to the milestone on the same platform to over a million people. He addressed touching words to his fans and colleagues on YouTube and Twitter. In a way, you could call MrBeast the biggest YouTuber on the platform.

For classification: While four channels have already made it before him, MrBeast is the second individual YouTuber to break 100 million subscribers. Before the YouTuber from Kansas, only PewDiePie had done that. PewDiePie went on hiatus last year and has since stepped back somewhat. Currently, he often does not reach more than 5 million clicks per video. MrBeast’s videos rarely get below 50 million views.

The other channels that have reached 100 million subscribers are companies with huge teams behind them. While PewDiePie and MrBeast will not produce their content entirely on their own either, their channels are not associated with any particular brand. The other three channels with 100 million subscriptions are Indian music label T-Series, Sony’s Indian entertainment television SET India and US YouTube channel CoComelon, which publishes videos of children’s songs. Here you can see the five channels with the most subscribers at the moment:

How did he do it? In his videos, MrBeast uses his wealth to bring a better time to those around him. In tournaments and challenges with big prizes, he gifts fans, friends and even strangers with life-changing sums of money. The response to his content is clear: his viewers love his philanthropic behavior and can’t get enough of James Steven Donaldson doing good. He didn’t have to go head-to-head with an Indian music label to captivate 100 million people. MrBeast’s success story reveals more about how the American made it to the top of YouTube.

MrBeast gets 50,000 subscribers in 60 seconds – That’s how fast his numbers grew

This is what the live stream looked like: MrBeast started his stream about 20 minutes before hitting the milestone. As he got closer to 100 million subscribers, the number grew faster as some fans withheld their subscription until the crucial moment. So, the minute the counter went into the 9 digits, MrBeast made over 50,000 subscribers. But even before that, his number of subscriptions was increasing in the 5-digit range per minute. You can watch the historical moment here.

The counter falls: With a million viewers, some will certainly have ended their subscription shortly beforehand in order to ceremoniously press the “Subscribe” button at home. Because just before the goal, the number of subscribers fell sharply for a short time. But even after MrBeast hit 100 million subscriptions, the number continued to rise. The YouTuber ended the stream almost 10 minutes later with around 100,122,000 subscribers. The current subscription status of MrBeast you can also follow live.