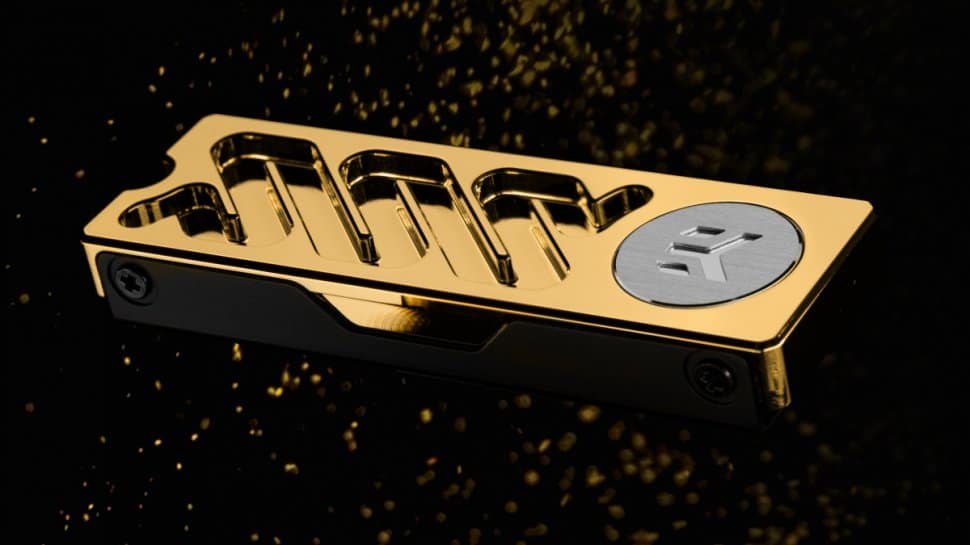 07/31/2022 at 09:30 am
from Norman Wittkopf –
Water cooling manufacturer EK Water Blocks now has various components with a gold-plated design in its portfolio, from the CPU cooler to the pump cover.

After the great success of its gold-plated EK torque fittings, EKWB has added several gold-plated versions of existing products to its web shop in recent weeks. The manufacturer points out that real gold was used for the coating of all associated products.

The latest addition is a gold version of the M.2 NVMe heatsink EK Quantum Convection, which works passively without water contact, but should still protect high-performance SSDs from temperature-related throttling. The heatsink is CNC machined from aluminum and has a nickel finish which is then plated with real gold. The backplate is also made of black anodized aluminum.

The CPU water blocks of the EK-Quantum Velocity² model series with a brass top and Optiflow engine for sockets LGA1700 and AM4 are now also available in gold versions, as are the pump covers EK-Quantum Convection D5 and DDC. The D5 pump cover is nickel plated CNC machined aluminum followed by a second layer of plating of real gold. Meanwhile, the DDC version acts as an aluminum heatsink for DDC pumps, which is said to extend the cooling capacity and lifespan of the water pump.

In addition to the main components, EKWB also offers various accessories in golden versions, as mentioned at the beginning, all of which can be found on the find official website. Meanwhile, the recommended retail price for the new components is as follows: