Lost In Play review: a gorgeous point and click puzzler 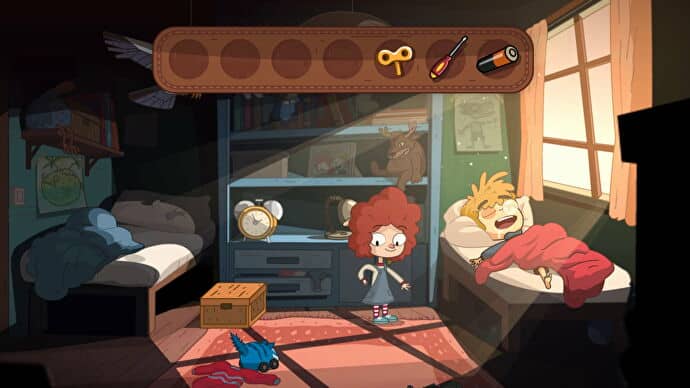 Lost In Play review
Some of its puzzles could be more kid-friendly, but Lost In Play is a charming point and click puzzler that really taps into the joy of childhood make-believe.

You know when a game instantly charms the socks off you the moment you first clap eyes on it? Point and click puzzler Lost In Play is one of those games for me. Its vibrant cartoon visuals immediately caught my attention when I first sampled its Steam Next Fest demo earlier in the year, and I’m happy to report that the full game, out today, is just as captivating as it was back then.

It tells the tale of Toto and Gal, a pair of rambunctious siblings who end up far from home after getting lost inside a fantasy world of their own imagining. If they don’t find a way back before nightfall, though, they’ll be stuck there forever. A classic kids adventure story, in other words, but one that really relishes in its own sense of playfulness. Over the course of their four-odd hour adventure, they’ll meet monster fighting frogs in a dark forest, board game-playing seagulls on the high seas, orc mechanics in a vast desert and even a heavy-metal loving sheep on a floating island in the sky as they make their way home to their messy childhood bedroom. It all makes for some memorable puzzling backdrops, but be warned: if you’re planning to play this with little ones, then you’ll definitely need a puzzle savvy adult in the mix, as some of its brainteasers aren’t quite as child -friendly as you might expect.

For the most part, Lost In Play is typical adventure game fare. As you move Toto and Gal through his whimsical mishmash of folkloric landscapes, you’ll be interacting with the environment and its colorful cast of characters to collect all manner of puzzle objects. A frog might need a can opener to eat his tasty, tinned fly food, for example, while a pesky goblin might want you to collect four rubber ducks for reasons before he’ll agree to let you up on his giant stork in an attempt to fly you home. Interaction points are all clearly marked up as you move your mouse across the screen, although surprisingly, it actually felt more natural to play with a gamepad here (which is also the recommended input from the developers, too).

Whatever your preferred interaction method is, though, clicking on these points will help you start piecing together what everyone needs. Characters all talk in the same nonsensical gibberish in Lost In Play (which is surprisingly pleasing on the ears, all things considered), but you’ll be glad to hear that every request is also accompanied by simple pictorial symbols of the item in question. This means you’re never left wondering what you need to do next, or which object goes where, allowing the game to elegantly side-step that age-old adventure game snag of throwing everything at the wall and seeing what sticks. It also keeping things nice and straightforward for any young ‘us who might be playing, too.

But it’s not all just matching square pegs with square holes in Lost In Play. In order to obtain certain items, you’ll also need to complete some Professor Layton-style logic puzzles first, whether that’s herding sheep into specific tile squares, or outwitting a monster by leading it through a maze. Most are relatively straightforward, especially when prefaced with their own individual tutorial, but some remain a little hazy in their presentation, and the game’s reliance on pictures over text didn’t always succeed in conveying some of its finer nuances. There’s also an entire card game toward the end of Toto and Gal’s adventure that just chucks you straight in without any explanation whatsoever.

To their credit, developers Happy Juice Games provide players with plenty of tools to help in moments of crisis – in addition to an info button acting as an always accessible tutorial reminder of how puzzles work, there’s also a hint button you can call upon at any time, and an instant reset option if you end up going wrong or see yourself failing to win a game of checkers against a particularly wily forest imp, for example. And in fairness, on the handful of occasions where I did get stumped, the hint button was usually enough to point me in the right direction. But it did also make me wonder how kids might fare in the same situation – especially if they don’t have a handy adult playing alongside them.

It’s a strange tension for a game that looks and feels so welcoming for younger players elsewhere, although I should stress that these situations were very much the exception rather than the rule. On the whole, Lost In Play’s logic puzzles brought a welcome sense of variety to its fantastical style of adventure game brain-flexing, and nearly all of them riffed on what was actually happening in the story as well. None of Layton’s abstract ‘This reminds me of a puzzle!’ gubbins here, no sir. There were perhaps one too many sliding puzzles for my liking (and we all know how I feel about those), but these were the only moments Lost In Play felt in danger of repeating itself. Everything else felt fresh and different.

But honestly, who can stay mad at such lush and lavish visuals? Lost In Play is truly just the most gorgeous thing to behold when it’s in motion, and the developer’s history in the art and animation industry really shines through here. Each interaction is beautifully realized with a lively sense of humour, and it’s stuffed full of incidental details that had me grinning practically non-stop while I was playing. It really does feel like you’re playing an interactive cartoon – not just in the way it’s presented, but also how its various stages are all split into easily digestible 15-20 minute puzzling chunks. It helps to keep the pace feeling brisk and breezy, and by the time I got these kids back home, any logic frustrations I’d felt were like tiny bumps in the road, bearly visible in my rear view mirror.

If anything, I was more disappointed that all the other exotic locations weren’t glimpsed in the trailer, in fact, playable stages, but simply part of a cutscene that plays out as the kids are nearing home. I wanted to jump through lava and pull out thistles from a giant’s toe, not watch it play out in front of me, gosh darn it, but hey, it’s a small dev team, I get it. Even without those extra pit stops, Lost In Play is still a rolling adventure in its own right, and just the most lovely thing to spend your afternoon with. Logic hiccups aside, I still reckon this is a great game to play with kids – just be prepared to take over some of the puzzle solving if you do. Ultimately, Lost In Play is like curling up with a good book, and four hours later you’ll suddenly wonder where the time’s gone.