Swery has written a book and its title is peak Swery 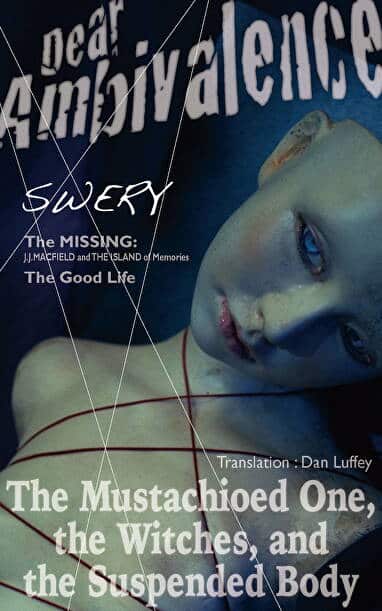 They say you shouldn’t judge a book by its cover, but when the book in question has been written by Deadly Premonition creator Hidetaka “Swery” Suehiro and is entitled “Dear Ambivalence: The Mustachioed One, The Witches, And The Suspended Body” , you can be absolutely sure I’ll be adding it to my enormous ‘to be read’ pile as soon as I’ve finished typing. First published in Japan last year, Swery took to Twitter yesterday to announce its English translation by Dan Luffey is now available digitally. You might want to sit down for the synopsis, though. It sounds wild.

Coming in at a whopping 484 pages according to Amazon’s product stats, the summary reads as follows: “When the naked, hairless, brutalized corpse of a young girl is discovered in the British countryside, everyone finds themselves asking the same question: Who did this , and why…?”

It goes on, too, and – stop me if I’m wrong – but doesn’t this sound like an alternate plot to his latest game The Good Life? Minus the whole transforming into cats at night thing? Vid bud Liam also pointed out that some of the names seem to be taken from Swery’s puzzle platformer horror ’em up The Missing from 2018.

“Normally, this quiet idyllic town’s policemen spend the bulk of their time chasing around lost sheep. But then, one day, they found her… Elizabeth Cole. 17 years old, female… Hanging upside down from the town’s symbolic elm tree… Dripping with morning dew, shaved completely hairless, missing every last one of her organs.

Emily, a detective who was recently demoted from her post in London, teams up with a small moustachioed gentleman named Poco in order to bring the truth to light.

I told you it was wild, right?

Indeed, a closer inspection of the cover (see right) does seem to back up my vague theory that it does, in fact, have something to do with Swery’s various games, as both The Good Life and The Missing get name-dropped beneath the main title. I couldn’t tell you how they relate to the mysteries in the book, though. Neither are referenced in any of its five chapter titles, judging by Amazon’s ‘Look Inside’ feature, as those all begin with “The Moustachioed One And The…”

Clearly, I shall have to buy it and read it to find out – although if Deadly Premonition’s slightly useless detective Francis York Morgan doesn’t turn up halfway through Chapter 4 (The Mustachioed One, The Colossal Liar, Crime, And Punishment) in some kind of daft cameo, I’ll be sorely disappointed.

If you, too, would like to see what Dear Ambivalence: The Mustachioed One, The Witches And The Suspended Body is all about, you can grab its English Kindle edition now for £8 / $10.