Cult of the Lamb in the test: An (un)holy hit 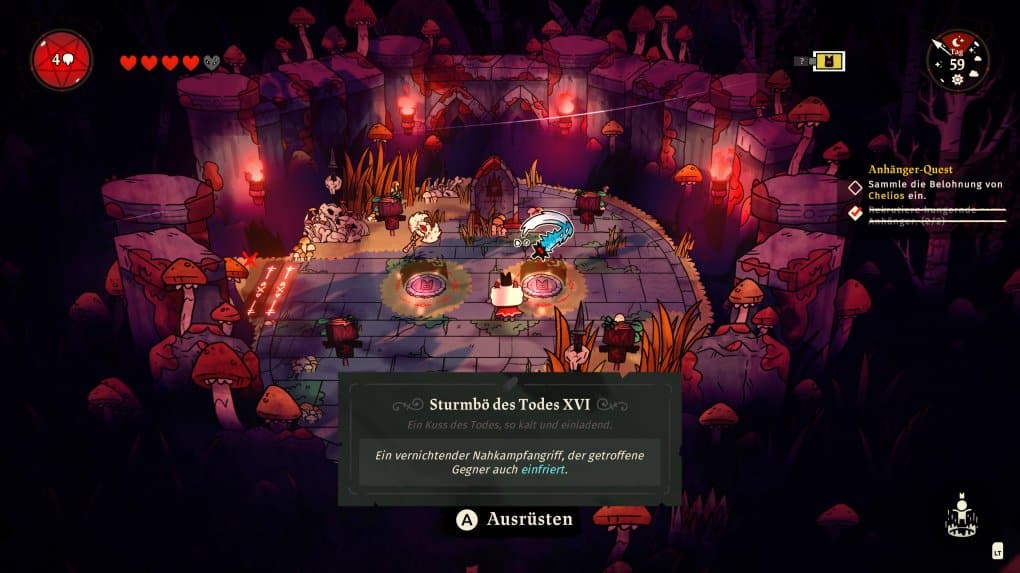 The four princes of the old faith want to destroy you and have already done so, because you are part of a prophecy that predicts their downfall. However, after being revived by “He Who Waits”, it is up to you to prevent your ultimate death and forestall the dark lords. So you embark on a campaign to defeat your enemies in the name of the waiting one and free him from his bonds.

You will also found a cult that will stand by you for the upcoming deeds. At its core, there are two task areas in the game: fighting in dungeons for loot, followers and boss trophies, as well as camp management, where you unlock skills and buildings. Each of the lords is the lord of their own world with different enemy types and items that you can unlock. With the help of certain resources that you can only find in the respective areas, you beautify your camp or expand buildings. In our extensive test, we found out for you how all of this fits together and whether it works.

14:11
Cult of the Lamb | REVIEWS | Roguelite management? One hell of a combo!

At the beginning of each run you get a weapon and a curse.


The wolf’s clothing suits us well

At the beginning of each round you get a random weapon and a curse that acts as a secondary attack. During the run you’ll occasionally have the chance to swap out gear for other randomized items, until then you’ll have to make do with what you have to fight your way through the first few enemies. From hooded disciples who harass you with daggers to giant toads that spit venom, the choice of opponents is quite varied, at least at first glance. Unfortunately, these are repeated frequently and you will also encounter enemies with similar attack patterns in other biomes.

The weapons can be roughly divided into three categories: fast, medium and slow, or light, medium and heavy. The system behind it is quite classic: the lighter the weapon, the faster it is and the lower the damage. The weapons themselves can be equipped with abilities like lifesteal, poison damage and more, this is also determined randomly. Unfortunately, there are no combos that go beyond performing the same attack three times or charged attacks, instead there is only one punch button. 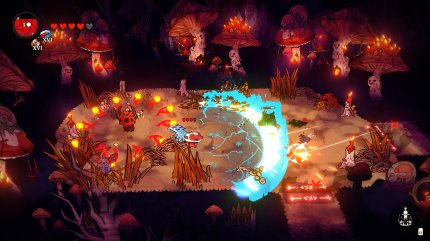 There are curses that trigger powerful slam attacks.

The curses are much more varied. From grenades with different effects, tentacles that hit in all directions or fire projectiles, there is something for everyone. This allows the game tactics to be decisively adjusted, unfortunately you are also largely dependent on the random pre-selection here. In order to use curses, you also need alacrity, which is left behind by slain enemies.

Your best friend is and always will be the powerful dodge roll! It has no cooldown and allows you to evade any attack. Depending on which of the four levels of difficulty you are playing, which can be changed at any time, it is necessary to use the three skills skillfully. Cult of the Lamb’s difficulty on Normal felt a little too easy for us, so genre veterans should at least play on Hard.

The controls are precise and the gameplay feels good. But due to the few attack options, there is a lack of variety in the fight. This is offset somewhat by different weapons, curses, and different enemy combos, but doesn’t make up for the lack of depth.