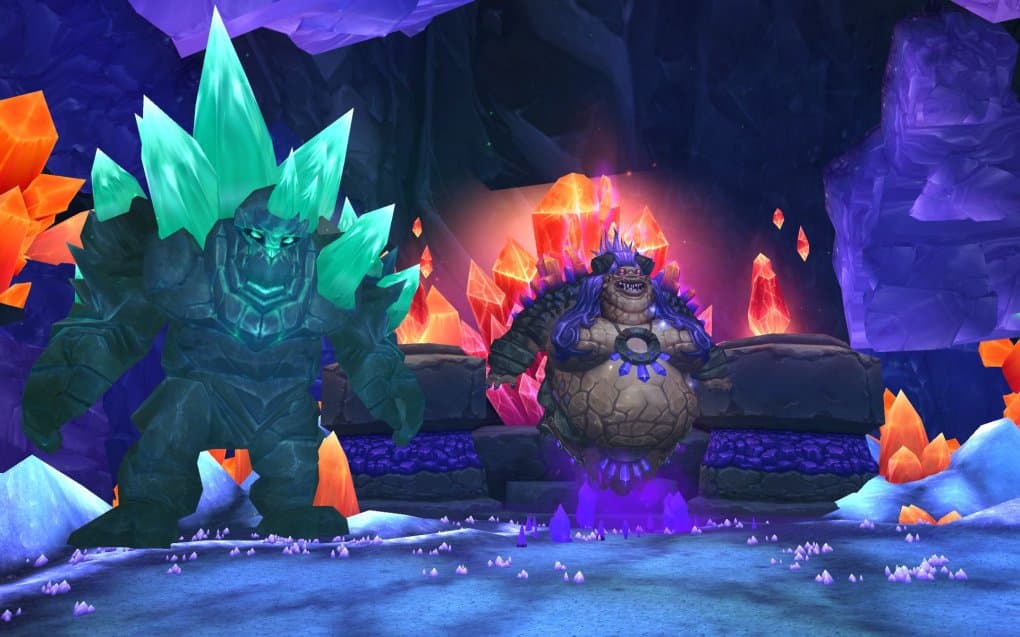 I’m assuming you don’t know much about how we work, and that’s okay. I’ll just tell you something about it: Whenever someone wants to publish an article on buffed.de, I look at it first. You could say I’m such a control freak that I read around 90 percent of the current content on buffed.

And when I received Phil News for the first time as part of this WoW: Dragonflight and the term “Dragon Isles Underground” I immediately pricked up my ears and the memory of a zone was awakened in my brain: Vashjir.

No, of course not, lol, but my rather positive memory of Tiefenheim. Because unlike in the Cataclysm starter zone Vashjir, the three-dimensional gameplay in Deephome worked like in other “normal” zones. There it was used sparsely and was not ubiquitous. After the last time I wished for a city like Suramar backI wish for a zone like Deephome this time!

When Cataclysm was announced that one would travel through the Maelstrom near the heart of Azeroth (just on a different elemental plane, otherwise we might have figured out Azeroth was a Titan back then), namely the realm of Therazane, at first I thought “urks”. Why? Because a complete cave zone would be way too dark and way too gray in my imagination. World of Warcraft (buy now ) tells a lot of stories and emotions about the look of the areas and it is much easier for a designer to create a positive, welcoming and non-threatening atmosphere when he can use bright, friendly colors.


Tiefenheim was an experiment in this regard. Could the developers of World of Warcraft manage to create a completely underground region that is visually about 1,000 times more interesting, attractive and appealing than previous underground experiments in Blackrock (aka Molten Core, Blackrock Caverns, Blackrock Depths etc. pp. )? I have no idea which design team took on Tiefenheim, but I’d like to congratulate the devs: Tiefenheim has become a beautiful and exciting zone. At least for leveling.

In Deepholm, Deathwing has recovered from injuries inflicted when Alexstrasza was freed from the Dragonmaw’s captivity. Convinced he was well enough to continue his reign of terror across Azeroth, Deathwing erupted across Deepholm’s Temple of Earth and through the World Pillar from this elemental plane. This massive eruption caused all elemental planes to become unstable and called the elemental lords into action. In Deepholm, Therazane was quite hostile to the newcomers from the overworld, but we were able to ingratiate ourselves with her. After all. Ragnaros, Al’Akir, and Neptulon can’t do that for one reason or another. 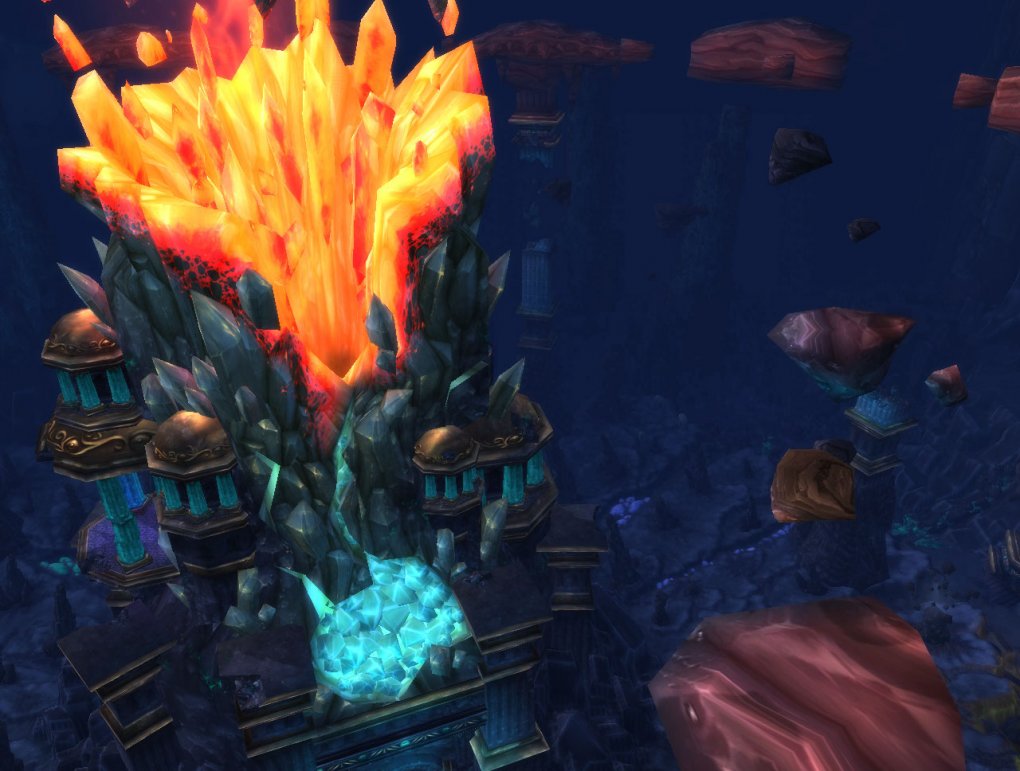 
Although Deepholm consists mainly of rock, the developers have played a lot with colors, shapes and ultimately light, similar to the cave north of Un’goro Crater. Tiefenheim thus became a visual revelation. There were regular ominous earthquakes, there were caves above, passages below, lava, mushroom monsters, stone dragons, elemental giants, troggs, and of course in the middle, the extremely impressive Temple of Earth, reminiscent of the Wyrmrest Temple in the Dragonblight woke up. Not once did I feel trapped in Deepholm or crushed by the stone cave ceiling far above me. But on the contrary. And maybe it was precisely this strangeness that aroused so much curiosity in Tiefenheim. The astonished “Oh” and “Ah” that escaped my lips during the first visit to Outland because of the otherness of the planet, also escaped me during the first visit to Tiefenheim. 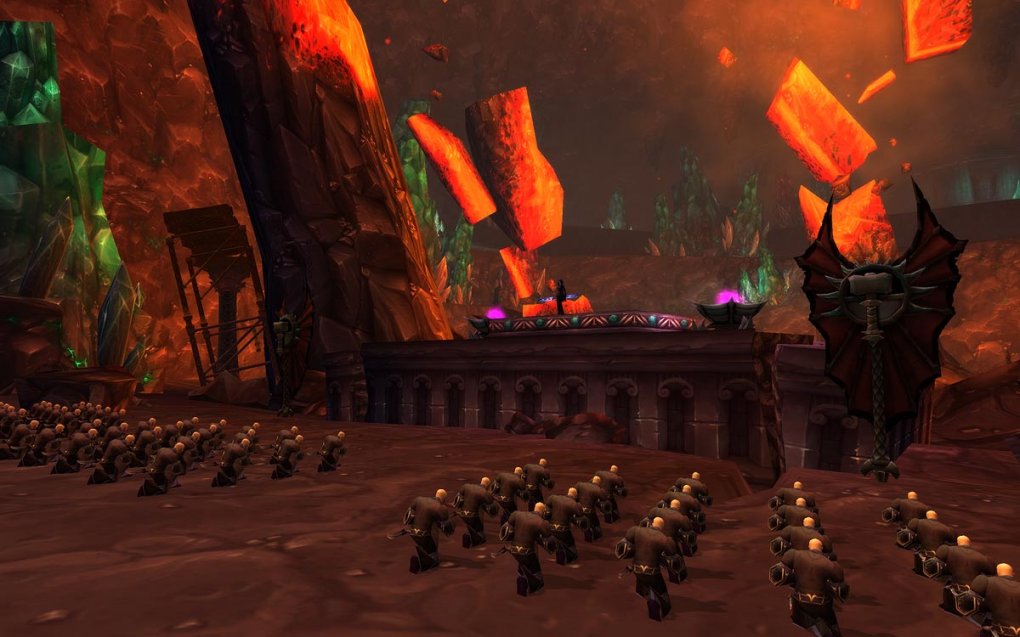 It’s been twelve years since Cataclysm, and Deepholm’s game design wasn’t outstanding. In fact, there wasn’t really much to do down there at Therazane after reaching Exalted, other than waiting for specific dailys for achievements and game stuff. More than a decade has passed, and both an underwater zone like Vashjir and an underground zone like Deepholm have not been repeated in years. I can also do without Vashjir because the 3D navigation was partly from underwater hell. I would like to have something like Tiefenheim back: visually opulent and sophisticated in terms of quest management and endgame activities. Do you think that’s great too?