Spider-Man Remastered PC: It’s still a patch or two away from perfection 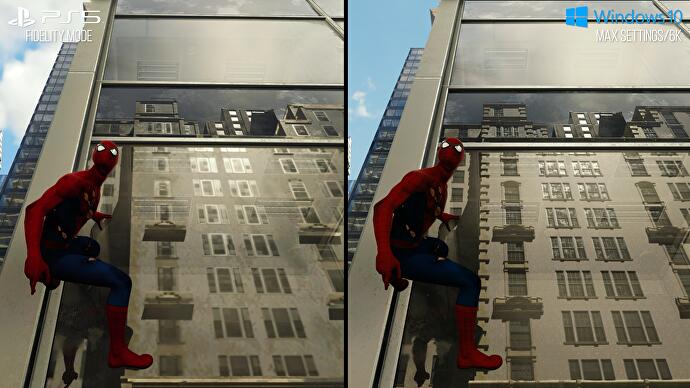 Developer Nixxes patched Marvel’s Spider-Man last Wednesday a few hours before the test embargo ended. This update was well worth it, and while some more polish is needed to bring the game into full shape, the version you can play today is definitely a hit. We’ve already discussed the PC version, but today we can get into a bit more detail and share our tweaked settings for the best balance between performance and fidelity.

First of all, I like the graphics configuration menu that pops up before the game starts, it’s a Nixxes (and IO Interactive!) trademark that gives an instant overview of the available options and allows for smooth settings changes outside of the game. These settings include full support for virtually any aspect ratio and a configurable field of view. Not only that, the game’s full-screen support also includes an exclusive full-screen mode that allows for resolutions and refresh rates outside of desktop options, a rarity in PC games these days.

The functionality of the options menu in the game is also impressive. If you pause the game, any changes you make will take effect immediately and you can see the changes in real-time. In a world where some problematic PC titles don’t and may even require a game restart, this is excellent. On paper, all the things I’ve praised here should be standard and self-evident for PC developers, but sadly that’s not the case. Nixxes shines where ports like Elden Ring, Final Fantasy VII or Halo Infinite stumble, sometimes spectacularly.

And what about my other current PC gaming issue? I’m of course referring to my #StutterStruggle, where most major PC ports now ship with annoying stuttering, often due to the in-game shader compilation which literally freezes the game while the shaders are compiled as needed. Nixxes seems to avoid this problem entirely by compiling on load and maybe even asynchronously in the background while you play. In the latter way, the team solved the annoying stuttering in Horizon Zero Dawn on PC.

The hallmark of a good PC port from consoles is scalability, both up and down. Ideally, you want the game to run on a resource-constrained system like the Steam Deck while also scaling to the absolute high-end system and beyond. First, let’s talk about the similarities between the PC version and the PS5 version. This starts with the texture quality, which is identical on PS5 and PC. The very high preset represents the console in both performance and quality modes. The PS5 has quite a lot of storage space, so texture quality on PC should be chosen carefully. If you have a 6GB graphics card, you should stick to high textures and ramp up to 8GB for very high textures, but avoid higher RT settings in this scenario. A GPU of 10GB or more should be good for everything the game has to offer, even with maximum ray tracing functionality.

See also  Only 4.99 euros per month: Mobile phone tariff with a flat rate and 5 GB now at the best price at Sim.de

Another holdover from consoles is ambient occlusion. The game supports HBAO+, but it doesn’t seem to be well suited to the game world. I recommend using standard SSAO instead, which makes it consistent with the PS5. Maybe HBAO+ isn’t working properly yet, but for now, regardless of performance, I recommend using SSAO. There is also a difference in depth of field between the consoles and the PC, the PS5 seems to be in the medium or high quality range. I would choose the low option here as the performance gain is significant and the quality loss is minimal. The representation of the hair? This is Insomniac’s wonderful new streak technology, featured here and in Ratchet and Clank. The medium setting is perfectly fine here, although the PS5 actually offers something like the high setting in detail mode. The medium setting could be game-changing for GPUs of the lower performance class, a change from the high to the medium setting results in an enormous performance gain on the Steam Deck, for example.

In addition, the game offers noticeable improvements in the settings: the image quality is significantly improved by supporting higher quality levels in texture filtering, while DLSS, DLAA and FSR 2.0 can be used both for upscaling and for stabilizing performance through dynamic resolution scaling. Other adjustments can be subtle: the quality of the shadows has been slightly improved, for example. There is, however, a scalability in the level of detail that is best experienced on foot as the setting is increased, resulting in subtle improvements in object detail at a distance. Crowd and Traffic settings are closely related to LOD, although opting for a low setting here doesn’t remove too much from the presentation but does improve CPU and GPU performance significantly. I was struggling to tell any difference in the traffic setting at all, so I couldn’t tell what tier the PlayStation 5 was at.

Biggest upgrade of all? Hardware accelerated ray tracing support. Happy to see a range of settings here, but very high beats the high setting typically used by the PS5. Building geometry that was broken down into flat textures on consoles is fully modeled on PC. Texture quality is on a whole other level, while the amount of world detail – and shadows – that comes with it is also fully reflected, sometimes where the PS5 has no reflections at all. Nixxes also offers PC users the ability to increase the draw distance of objects, crowds, and traffic beyond the console standard, related to the Detail Level, Crowds, and Traffic settings I discussed earlier. Just keep in mind that the more you push RT, the higher the load on the GPU and CPU.

The tweaked settings are in a concise table above, but ultimately it’s a twist on the PlayStation 5’s Performance RT mode. However, it’s not possible to fine-tune the settings. I wish there were console-like presets to go by. Let’s put it this way: The crowd LOD setting in Performance RT mode does not match any of the PC options. Obviously, Insomniac made its choices carefully to find a balance between cost and fidelity, so why not offer this setting to PC users too?

The “Original” presets in God of War and Horizon were very useful, showing PC users where the original versions made their trade-offs between performance and fidelity, and then allowing users to tweak from there. Detail fidelity, performance and performance RT presets would have been very welcome here in the PC port. On a Ryzen 5 3600 PC with an RTX 2060 Super, optimized settings bring a performance boost of 43 percent on the demanding Times Square. Since we may be CPU limited here, the actual improvement could be even greater depending on your machine’s hardware.

We’ve discussed tweaked settings based on a good entry-level RT-capable GPU – the RTX 2060 Super – but what about the GTX 1060 and RX 580, Nvidia’s and AMD’s most popular GPUs? We had serious problems with them before the last patch, but the situation has improved. It’s traversing the city that causes problems, and I’d recommend capping the frame rate at 60 frames per second and enabling dynamic resolution scaling. The GTX 1060 mostly hits a steady 60 fps, with occasional dips into the mid-50s, and the worst case I’ve seen is around 49 fps. The RX 580 is faster, adding five to six fps here.

Overall it’s solid enough at high settings, but lowering the presets won’t do much to improve the residual stutter, which is something Nixxes needs to look at. I found that I got a rock solid 60 fps with a GTX 1660 Ti. Recommended Steam Deck settings? Stick with the optimized settings, but reduce hair quality to medium and texture filtering to 4x. Set the cap to 30 fps via the system limiter (not even very low settings allow a fixed 40 fps), but to be honest, turning all the high settings down to medium – except for the texture quality – saves a lot of performance and looks on the handheld screen still looks great.

One final tip for anyone with older hardware: while it doesn’t work on Steam Deck, the in-game 30fps cap works fine with consistent framepacing. Select half refresh rate v-sync and you’re good to go. Of course, that means you’ll have a fixed 30fps on a 60Hz screen while higher refresh rate displays will run at half the refresh rate, but it works well so use it when needed.

In the end, this port turned out beautifully and I’m happy with it, but the stuttering GPU usage while traversing the game world on hardware at the 1060/580 level and probably below is problematic. I was told that Nixxes is still working to further improve the situation. I also feel that the game is still a bit CPU heavy and would like to see more optimizations here. That being said, this is a game that has made the transition from console to PC well and has all the quality-of-life improvements I could wish for – and then some. I’d love to see easily accessible config.cfg files for tweaking (I’m not even sure where that file is on the PC, or if there even is one!), but at this point we’re kind of on the verge of nitpicking, which shows how impressive this version is overall!