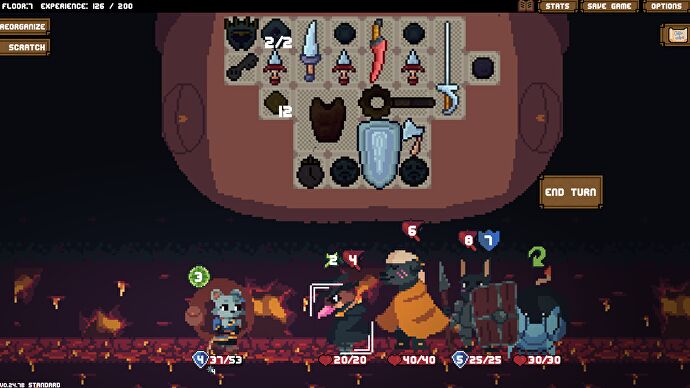 Excellent roguelikelike dungeon crawler Backpack Hero launched into early access this week, and it’s absolutely worth a go if you enjoy shuffle items around your inventory grid. Backpack Hero is all about arranging weapons and items inside your massive sack to develop powerful synergies, see. Some items buff items touching them, while others benefit from empty spaces, or some insist upon being in a certain grid row, and some even move around by themselves. The buildcrafting gets fiendishly fun as your critter delves deeper into dungeons in search of a giant hunk of cheese.

The basic premise: you’re a cute critter headed into dungeons, bashing baddies and gathering loot along the way. With full knowledge of the enemy’s next move each turn, you use limited supplies of energy and mana to swing swords, cast spells, apply (and suffer) buffs and debuffs, block attacks, and such. Except you have no character class and don’t equip any spells or items. Your build is determined by the items crammed into your massive backpack, and everything you are carrying is always equipped.

It tends to start simple. You’ll have three energy points to use each turn, a shield which adds a number of block points when used (at a cost of one energy), a sword which does a bit of damage (ditto), and a consumable meal which replensishes energy. Maybe you’ll soon find an item of armor which passively adds a small amount of block each turn. Maybe a two-energy weapon with does more damage, or a zero-energy weapon which does less. Then a magic wand which can cast a spell but needs to be touching a mana source. Maybe you’ll find a bow, whose arrows grow stronger depending on how many empty spaces are to their right. And then it spirals into complex buildcrafting with special items, gems, and more which are buffed or weakened by their position in the grid.

The inventory tetris challenge isn’t making everything fit (you will abandon so many items), it’s making a good build fit. Some items buff other items they touch, or which are in the same row. Some armor pieces are strongest in certain areas of the grid (top for helmets, left and right for individual gloves, bottom for boots). Some items are ‘heavy’ and will always fall to the bottom row of your bag, while others are ‘light’ and only go to the top. Some items move around of their own volition, granting buffs along the way, so you need to clear a path for them. And then you encounter enemies who cast curses, which manifest as physical items demanding space in your pack until disposed of (or you can ignore them, and directly take a fair chunk of damage).

The buildcrafting can lead to pleasingly silly results. I’ve had builds which deleted bosses in three turns. I’ve had builds which made a flurry of zero-cost attacks that grew from gentle stabs to murderous woundings. In one run, I built a wall along the bottom of my backpack. Just a wall, built of bricks which individually offer a tiny amount of passive block each turn other but grow stronger the bigger your wall is. You can even put a roof on top for extra bonuses.

The best part is that because this is all so freeform, you can try pivoting to a new build mid-run if you find inspiration or an item that’s worth it. Get rid of your old gear, swap in new stuff, and away you go as a whole new adventurer.

See also  Too bad: Last Call BBS is the last game from the creators of SpaceChem! Just why?

I enjoyed the Backpack Hero demo earlier this year, and I’m a touch overwhelmed now it’s in early access with new items, enemies, secrets, and more.

The biggest change is two extra characters who play in whole new ways. The frog wizard Tote adds a deckbuilding element, replacing many item types with a collection of magical runes she randomly draws from each turn. And the robomouse CR-8 has you arrange circuitry to send a surge of item-activating energy through your inventory in a line, a flow you can expand and redirect with pipes and splitters and boosters and… it’s a lot to get my head around I’m not sure what I’m doing with either of these characters yet, and I look forward to learning.

The hope is for early access to last seven months, leading to a full launch in April 2023. Before then, the devs plan to add more characters, enemies, events, dungeons, and a town-building meta-progression system. You can see that and more laid out on the road map.

Backpack Hero is available now on Steam Early Access for Windows, Mac, and Linux. The 10% launch discount brings it down to £12.14/€12.59/$15.29 until Monday the 22nd. You can download a demo from Steam or play it in your browser on Itch.io.

Inventory tetris fans might also fancy this puzzle game which is basically Resident Evil 4’s inventory. And along our ongoing mission to decide the single best thing in video games, you decided that inventory tetris is better than fishing minigames.