QUBE 10 years on: still a great puzzle game, and it’s about to get one heck of a glow-up 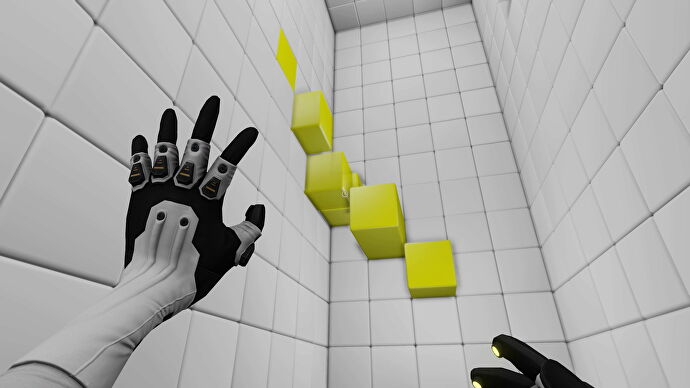 Time has never been very kind to QUBE. The first-person puzzler first began life as a university project in the late 00s, but by the time it finally launched commercially in early 2012, it was almost universally written off as nothing but an okay Portal clone. In fairness, there was a lot working against it. Like Portal, it was set in a largely white, sterile testing facility, and while it didn’t involve flinging boxes through portals, each one of its puzzles did revolve around manipulating brightly colored blocks to progress to the next room. The one major thing it was lacking, and probably a large part of why it never really stacked up to Portal at the time, was a GLaDOS-sized villain. QUBE’s story would come later, in the 2014 Director’s Cut, which added an entire script, voice-acting and a revamped musical score to give Toxic Games’ puzzler a bit more, well, shape.

Even with all those extra flourishes, though, the Director’s Cut was still the same QUBE puzzles from before, leading many to write off the update yet again as a slight improvement on the original, but nothing to get too excited about. Now, in 2022, QUBE is getting a fancy 10th Anniversary Edition that rebuilds both versions of the game from the ground up, while also adding an entirely new sector that doubles the length of the game. And I’m telling you: please don’t write off QUBE for the third time in its life. It deserves better than that.

Admittedly, I never played the original QUBE at the time. My first encounter with it was through the Director’s Cut a couple of years ago, and that decade of distance from my initial encounter with Portal may well have softened the edges of some of those rougher comparisons. All things considered, I thought QUBE held up rather well as a first-person puzzle game – and revisiting the original again now in the cold light of 2022 minus its Director’s Cut storyline of two warring radio signals fighting to tell you the truth about your current predicament, I’d still stand by that assessment. Lifting those blocks of bright primary colors out of their little grid basins with your magic psychic gloves is still intensely satisfying stuff, and the way its puzzles riff on themselves and evolve over time continues to be a head-scratching delight.

Of course, the fact that the QUBE of 2012 (and by extension its 2014 Director’s Cut) is still eminently playable today may have you wondering why there’s a need for this 10th Anniversary edition at all. After all, there are plenty of games from 10 years ago that still look and play brilliantly today, and apologies in advance for turning anyone into dust here, but I’d put QUBE in exactly the same kind of camp as the original Dishonored, XCOM: Enemy Unknown and Mass Effect 3. Sure, they might be a teensy bit creaky by today’s standards, but they all still look perfectly easy on the eye and have little to no performance issues.

Part of it is to be done with preservation, however. On Steam, for example, the original 2012 version has been completely superceded by the Director’s Cut now, so it’s no longer on sale. Similarly, after QUBE’s console publisher decided to discontinue selling it a while back, you also can’t buy the original on consoles either. The Director’s Cut is still readily available, of course, but in the 10th Anniversary’s new developer commentary about the making of the game, it’s clear that preserving this older version of their debut game project was an important passion project for them. That, and they were also starting to accumulate a bunch of new puzzle ideas in the months leading up to its 10th anniversary, and they thought that a complete reimagining of the game would be a good way to celebrate its history.

Of course, just how much preserving this 10th Anniversary is doing when it looks so vastly different is also up for debate. As mentioned above, this collection gets you remastered versions of both the 2012 and 2014 Director’s Cut versions of QUBE, plus that all-new Sector 8, which unlocks once you’ve seen at least one of the end credits, and adds another 4- 6 hours worth of additional puzzle solving to the mix. Sector 8 isn’t really part of the main story as such, but it is 100% next-level QUBE-ing. I’ve been playing an early preview of it recently and had the aid of some sneaky dev tools to jump around to different checkpoints, but even some of its very early puzzles had me scratching my head in complete, dumbfounded silence. It’s ultra difficult, and really does rely on having an absolutely sound understanding of every last QUBE principle in the game.

I will hold my hand up now and say I’m probably too stupid to really get the benefit of Sector 8. The dogged completionist in me that never likes to leave games unfinished will probably still keep plugging away at it here and there, but even if, like me, Sector 8 ends up being a complete non-starter for you, man alive, you can’t deny the rest of it has had a pretty incredible glow-up. Those flat, stark white walls now have a ridged, coarse texture to them, jutting out at odd heights and angles, and the colour, oh my, the colour. Entrances and archways are now slathered in an eye-catching orange and cool mint green, casting my mind back to the Victorian-style swimming pools I spent so much time in as a kid.

This newfound splash of color doesn’t overshadow or detract from the key puzzle blocks either, as these have now been given an extra glossy, ray traced sheen that instantly makes them stand out from the surrounding sea of ​​background tiles. They still retain their hard, angular edges, too, and pushing and pulling them out of these knobbly chamber walls with your magic gloves somehow feels more tactile than ever before, like you’re clicking together a slightly broken Rubix cube made out of Lego and hammering it back into shape.

The 10th Anniversary edition is still a little way off from final release at time of writing (it’s still listed as Coming Soon on Steam), but based on an early preview build I’ve been tinkering about, it’s almost like I’m playing a completely different game. Yes, the puzzles are pretty much identical versions of what came before, but many have received subtle shifts, tweaks and changes. Rotating puzzles now have horrible laser bins you’ll need to avoid, and heck, later levels now give you a choice of where to lay down certain color blocks where they didn’t previously. I know this, as I’ve literally spent the last week playing all three versions of QUBE back to back, and let me tell you, the 10th Anniversary edition has more rug-pulls than you’d expect.

That’s kind of what’s so exciting about this particular QUBE outing. Despite having solved every puzzle twice over in the days preceding it, the 10th Anniversary edition sheds new light on almost every single one of them. And you know what? I almost prefer it without the Director’s Cut story mode now, too. It’s funny, playing the two of them in such close proximity and seeing all the elongated walking sections and long lift rides that have been added to make sure you’ve really got time to listen and absorb what’s being said over the radio to you, and in hindsight I could almost do without it, you know? Just let me get to those great puzzles.

That said, I do also appreciate the developers including PixelPopper’s close-reading analysis of QUBE: Director’s Cut as well, which can be found in the 10th Anniversary extras section (as well as on-line). I do enjoy long-reads like this from time to time and the author (who’s also a sometime commenter here at RPS – hello!) puts forward an interesting case about exactly what it was doing in response to Portal and its first-person puzzle contemporaries , and why it’s deserving of a more modern reappraisal.

Personally, I reckon this 10th Anniversary is a pretty great way to do just that, especially if you haven’t yet experienced QUBE in any shape or form before. Will a fresh lick of paint and some new bumpy surfaces help deflect some of those inevitable Portal comparisons going forward? Possibly, if you want to be cynical about such things. We’ll have to wait and see whether it’s been successful or not when it eventually comes out. But I do think there’s merit in recontextualising a game that’s been lost to time a little bit, and presenting it in such a way that really lights up the eyes as much as your mind. Here’s hoping that history’s a little kinder on QUBE in 2022. After all, they say third time’s a charm, right?