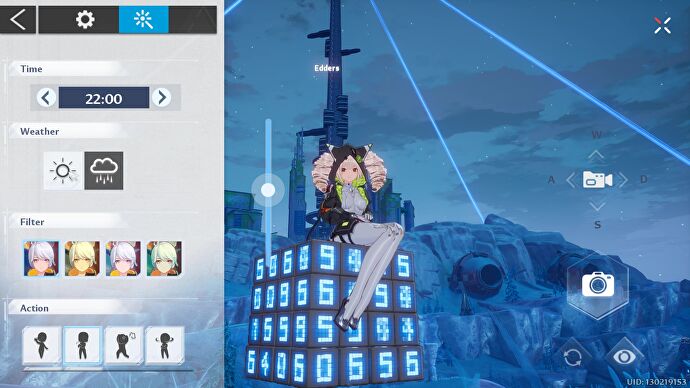 Tower Of Fantasy is a free-to-play MMO gacha game, the sort of game that implores you to spend in-game currency on lootboxes in the hopes you’ll build a particularly powerful collection of anime people. Genshin Impact wrapped this business model up in a surprisingly excellent open world RPG, that Graham called one of the best games of 2020. Tower Of Fantasy pulls from a neighboring gacha vending machine, except that its mixture of MMO, realtime combat, and lootboxing isn ‘t wrapped up in as consistent a package.

Tower Of Fantasy is a “shared open world RPG”, which sees you select a server from a series of regions and create a character. This is one of the game’s key differences to Genshin Impact, placing it more in the MMORPG space to Genshin’s comparatively solo RPG experience. Although I wouldn’t say the ToF server I’m on is teeming with players like World Of Warcraft, but there seem to be a fair few catboys and girls populating global chat with either requests to party up or all sorts of nastiness that makes the world feel lived in, in both the nicest and absolute worst sense.

When it comes to ignoring everyone else and delving into the game’s main story, it’s a mixed bag. You bounce between characters called Shirli and Zeke at a blistering pace, with little time to develop any significant relationship. So when one goes missing or has a hard time, it’s very hard to conjure up any emotion. Then you’ve got the writing, which isn’t bad by any means, but has a biting simplicity that can draw you out of the world at crucial moments. Mainly because your character has a habit of shouting things like, “I’ll do whatever it takes to save her!” no matter what the conversation’s about.

See also  Fallout (Amazon Prime): Production of the series adaptation will start in 2022

At its core, though, the game doesn’t hold my attention like Genshin. Where you might forgive – or even learn to love – Genshin’s gacha side because its story, combat, and exploration help endear you to its greed, Tower Of Fantasy lacks that rock-solid core and, in turn, makes its gacha-ness harder to accept. It leans too heavily into MMOism for my liking, where missions and overall exploration seem a bit too simplistic.

Compensation is a bit of a theme here, isn’t it? MMOs like WoW make up for dated quests with systems that make the reward meaningful enough to motivate you through mundanity. You don’t mind collecting 15 mackerel eyes for the witch down the road, because the resulting pumpkin tokens will net you that hardened vegetable shield you’ve always wanted. And the way the combat and exploration are constructed matches its slower tempo, with hotbars and cooldowns, lengthy griffin rides and hours of marketplace trading. But Tower Of Fantasy is this unreliable mash of MMO questing with Genshin-esque combat, all soaked through with gacha stuff that makes it very difficult to pin down.

Granted, one thing the game nails is its real-time combat, which is punchy and responsive. Dash just before an enemy swing connects and you’ll temporarily suspend time, which lets you stick a few more hits in and swap weapons which, in turn, unleashes a devastating special move. It’s free-flowing and flashy, letting you turn almost any fight into a satisfying spectacle. And it’s backed by one of few gacha systems that I’ve semi wrapped my head around. Basically, you can spend these gold orbs on “Special Orders” (loot boxes) which give you a chance of unlocking new “Simulacrums” (weapons that are also cutesy anime girls). Sometimes you get a dud (no anime girl), but sometimes you strike lucky (an anime girl who happens to be a halberd). I am lucky enough to own an SSR rank weapon-person who lets me embody her as a sort of character skin, but also use her deadly hula-hoops in battle.

See also  Resident Evil 4: The first trailer and release date of the remake are here

And it’s a world that’s rather lovely. It’s this sort of idyllic land of rolling hills and blue waters, dotted with quirky towns cobbled together from futuristic junk. Briefly, I entered some snowy fields during a story mission and I’ve seen hints of some crystalline mines on the interwebs too. I own this Rubik’s Cube hovercraft that lets me get around quickly. I have a jetpack that acts as a boost up to high spots or a glider of sorts. I have a jet board that lets me skim across the seas. A little stamina bar tells me when I can’t clamber up a surface anymore. I’m a conveyor belt of waifus, able to hack and slash my way through hordes of enemies.

And yet, most quests sling this dynamism into the dirt in favor of jilted MMO fare. “Could you inspect those lamps?” asks a kid dressed like a cybernetic samurai. I press F next to some lamps and that’s that. Another time I break some folks out of a prison, and interspersed between fun, frenetic combat bits, I’m disguised as the enemy, jankily moving between markers and dodging cones of vision. It is less Metal Gear Solid and more Metal Gear Viscous. When I press F to free them I don’t know who’s more relieved it’s over.

Optional activities seem a bit better. I’ve partaken in some dungeons, one of which teamed me up with some randoms and saw us take down a big brute and his dogs. Another saw me fend off waves of enemies with elemental resistances, so I needed to equip a weapon that bypassed their strengths. All these missions understood the agenda: a touch of platforming, but mainly bashing. They rewarded me with a bunch of materials, many of which I simply cannot keep up with. In fact, there are swathes of this game I just don’t get and perhaps won’t ever understand. All of these lie buried in my backpack and the dozens of menus that surround it.

Every time I log in, I check my mailbox. I do this by pressing Enter, which then lets me click on the menu in the top right and bring up what’s most likely another apology for many of the game’s launch woes, like lengthy login queues and weird – albeit hilarious – glitches. I click “Claim”, to collect my orbs and coins and chips. Then I’m lost! I click Escape, which brings me to another menu pocketed with red marks, letting me know that I’m able to click “Claim” on something, somewhere. There are weekly missions, a battle pass, achievements, a Wanderer’s Log, a daily supply box, Limited Gift Packs, Bounties – more, so many more.

Naturally, the rewards bleed into progress. My waifu weapons can be upgraded in a staggering, mind-boggling number of ways, many of which I’m convinced you’re not supposed to grasp, but just mindlessly accept. I can pour currencies into upping my suppressor, which seems to act as an addendum to my base level. I can slap Matrices into my weapons, which ups their stats in some way, and there are a few different types of Matrices, all upgradeable with things. You can unlock some new bits of story by purchasing gifts for your Simulacrums. There’s even a currency which lets you crack open chests in dungeons as if it’s a privilege to do so.

Granted, you can click on any material in the game and it’ll tell you how to earn it for free. Plus, the map and many of its activities will grant you plenty of bits to smush into other bits. So, if you’re into the gacha grind then you’ll likely appreciate that it’s not stingy in the slightest, and perhaps even more streamlined than much of the competition. And I’d be lying if I said I didn’t get pulled in by allure of gambling away my precious gold orbs and landing that super-duper ranked weapon. Without a doubt, the game taps into everyone’s fantasies of striking it big in the Euromillions and stating to the press that your first purchase will be an orb in the video game Tower Of Fantasy.

There’s definite fun to be had in Tower Of Fantasy, as there’s a lot of gacha systems at play to motivate you through some iffy questing. And you can rummage through your menus to access a bunch of optional dungeoneering, with a spot of cooking or puzzling in between. It has the capacity to surprise and delight, but it’s all underscored by a slight jank that’s hard to overlook, especially when it has the likes of Genshin Impact or other popular MMOs breathing down its neck.