We Are OFK review: an emotional music biopic that’s a bit too Silicon Valley 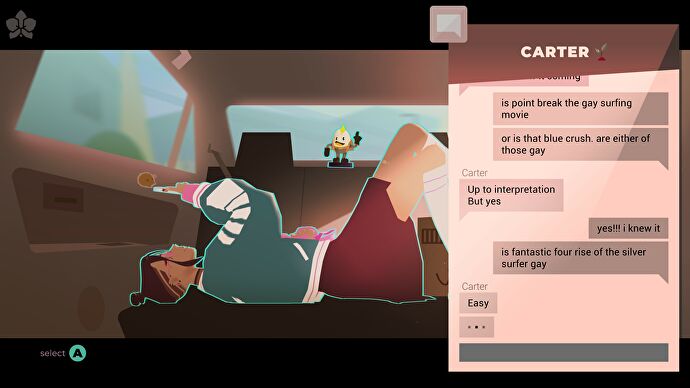 We Are OFK review
A heartfelt biopic that explores the highs and lows of breaking into the music industry.

Luca Le Fae has had it. His work as a writer for Leviathan Games, one of the biggest game developers on the planet, may pay well, but it’s creatively unfulfilling. A fateful encounter with his old acquaintance, Jey Zhang, at a party may just provide Luca with the escape he has been looking for. Jey, a successful music producer, remembers Luca as an incredible songwriter and asks him if he has any samples he could send her. Suddenly the unthinkable, a single, an EP, perhaps even actual stardom, seems within Luca’s grasp, but life has a tendency to get in the way even when you’re ready to take the chance of a lifetime.

We Are OFK can be described as a 3D visual novel or a mildly interactive five-part TV series you just happened to buy on Steam. The first two episodes are available on launch day, with episodes three to five releasing weekly after the game’s initial release. Each one comes with its own opening, which really sells the feeling of catching a new episode of a miniseries each week. With each episode, you follow the story from a different band member’s point of view, from their initial decision to be band-adjacent to taking their first wobbly steps in promoting themselves as artists. Joining Luca on his journey are pianist Itsumi Saito, who works in social media management at Leviathan, and Luca’s housemate Flores, an audio-visual effects artist.

We Are OFK is often entirely passive. You follow conversations and sometimes get to choose a dialogue option displayed as a character’s thoughts. It’s an interesting conversational approach as it’s much closer to how people actually decide what to say rather than the exact words displayed on the screen, but it also means you might not know exactly what you are going to get when a character opens their mouth. Not that it matters too much, We Are OFK is very clear about players being an audience with no control over the story. There’s also a lot of texting. a lot of texting. Here too, you get to make choice, but neither your texting choices nor your conversation choices have any bearing on the plot.

The dialogue and voice acting, however, are strong throughout, leading to very natural-sounding conversations that drift from dating to work to a TV show one of the characters watched the other day. Sometimes they sound more like teenagers than working professionals, injecting drama into situations that on the face of it really aren’t all that dramatic, and some backstory that is alluded to is so nebulous it went straight over my head. I guess you had to be there. I do appreciate the Final Fantasy references, though.

We Are OFK is a biographical game about a real band, which turns the game into a sort of cross-media experience. Each episode contains an interactive music video, the music to which you can actually buy and stream. Various band members have been streaming on Twitch as their virtual counterparts and set up their character’s social media profiles.

The game’s music videos that are mildly interactive. The first episode’s video gave me high hopes that We Are OFK could become a more narrative-focused spiritual successor to Sayonara Wild Hearts. But, unfortunately, the game doesn’t reach those highs, and whether you actually interact with the music video or not doesn’t make a huge difference.

Despite not much interactivity, we are OFK really knows how to tell a story visually. The vibrant environments and character designs are very memorable, and I took screenshot after screenshot of beautiful camera angles both in-game and during the music videos. Both omniboi’s soundtrack and the band’s songs – sung by the game’s director and Luca’s voice actor Teddy Dief – are really catchy. It’s a type of synth-pop that really fits the band and the game’s overall atmosphere.

Since OFK are a real band, and not one recounting the story of their meteoric rise to fame, the game focuses predominantly on the business of getting people to notice you and much less about the act of making music. You can watch Luca fret about selecting the right demos, or try to network his way through parties, but these are arguably We Are OFK’s least interesting parts. It’s also difficult to connect to the game’s inherent LA-ness. Characters meet in hip bubble tea shops or at clubs to talk shop, and when meeting potential clients there’s talk of projects and non-disclosure agreements. This is a different world for many, and it may be difficult to connect to if you don’t work in music or game development.

We Are OFK is a game about the frustrating feeling of having to choose between your passion, a steady income, and about how the road to success is paved with annoying dudes who want to talk “vibes” and “synergies”. Issues like career advancement are distinctly middle-class concerns, however, and sometimes OFK falls in the trap of sounding exactly like the things it supposedly makes fun of: a collection of Los Angeles hipsters whose biggest problems are their dating success rates and finding good recording equipment.

I ended up liking the game best when it talked about things I recognized. Each band member has concerns that go beyond the band – relationship problems, parental expectations, and the odd feeling of being as afraid of success as you are of failure.

In its quiet moments, We Are OFK is a beautiful and moving examination of anxieties that felt very familiar to me, questions like how long you’re going to stay friends with the people you love, if there is more to life than work, or what it means to be good at something. As a creative, I recognized myself in We Are OFK often, but it is very much a game that stands and falls with how much you can identify yourself with its characters and their individual journeys. Most of us simply don’t know any music producers or company CFOs. In order to tell these more personal stories, the game would often move away from the topic of music creation entirely, especially in the latter episodes, making We Are OFK occasionally feel like several separate games and stories mashed into one, or a TV series with distinct filler episodes.

At this point, both in the game and presumably in real life, OFK doesn’t feel like a ‘real’ accomplished band. We Are OFK is not a traditional story that offers closure, which can be frustrating, but in many ways that is We Are OFK’s entire point – life happens to you, whether you want it to or not.