What’s better: a level 1 rat, or Alone in the Dark’s jacket inventory? 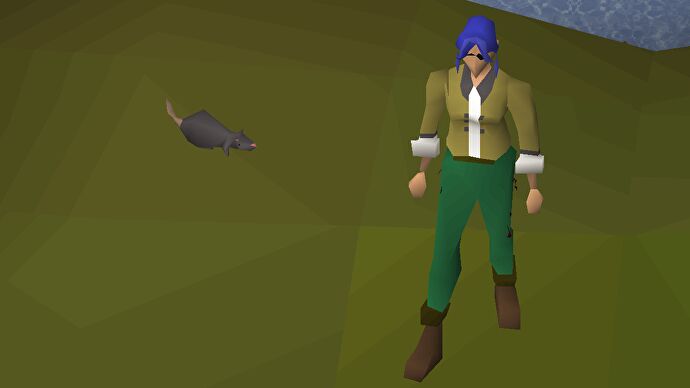 Last time, you decided that nude mods are better than going into meats and guts. Oh sure, you’re brave with your votes, but not one single commenter was brave enough to address the subject of honking their pud. cowards. If you won’t expand, we have to move on. This week, I pose a question of squeaky critters versus a squeaky coat. What’s better: a level 1 rat, or Alone In The Dark’s jacket inventory?

“Innkeep! I require board for the night, two weeks’ provisions and your finest low-end horse to leave in the morn, and pray tell: whence most one earn coin in this dark region?”

The innkeeper looks you up and down. Oh she’s seen your type come in before, and if she strains she can remember some of their names. Lionel The Brave. Edith The Bold. Barry Big Bolts. She’s also seen their corpses face-down by the roadside mere miles outside town, stripped of their cool black leather garments and tactical pouches they bought at the Dark Brotherhood Surplus shop and their glimmering trinkets from Wizard eBay. She sighs loudly.

“Two days to pull all that together. For now, aye, I can offer you a ‘quest’.” She snarls that last word, not that you notice, then jerks a thumb towards the cellar door. “Rats. Bring me ten rat tails and you’ll earn room and board until your order’s ready.”

Reader The Dear, my friend, swallow your spite. Punch down the feeling that you are being insulted. Question your knee-jerk reaction that this is beneath you. The innkeeper (her name is Judith, by the way, not that you asked) is doing you a great kindness. She doesn’t know you. To Judith, you’re just another bright-eyed rube starting out with dreams of adventure and fortune who’ll end up dull-eyed in a ditch. These ten level 1 rats are a test.

Could you kill a rat? Can you look at a glossy little lad, grown fat on brewer’s barley and dropped pork scratchings, and put a blade between his bright eyes? I’m asking both physically and emotionally. Have you seen how fast rats move? Have you seen how cute they are? Can you kill one and then keep on killing after the first fleck of blood hits your face? Can ye heave aside the sacks of neeps and tatties his family will flee behind? If you can, hey, maybe you’re ready to carve a bloodsoaked path across the land in search of fame, fortune, vengeance, or whatever the hell it is you think you deserve. But if this first step causes you to stumble, Judith knows where you’ll be two days from now. You can’t keep doing this.

Judith has seen more than her share of heroes, mind. Ian The Mighty, she served him a half even though she suspected he was underage (and knew he was when he spluttered up that first sip of bitter). Raven Void Abyssnia was a sweetheart. And The Magnificent Gladys, gods, wasn’t she just! But by and large, your type come in, pay her handsomely for dinner (you always say “handsomely”, she doesn’t know why), then hours later some brigand drags a half-blunt dagger across your belly and spills her stew in the mud.

At first, she tried to warn your type. She learned this only encourages you. “Worrymongering,” you often call it, “superstition” and “old wives’ tales” that won’t keep you from “wielding the gleaming light of justice to banish darkness from this fallen land.” She looks to herself.

She has learned, too late, to spot dangerous customers with a glance. She’s now fairly confident she can spot a killer. She keeps an eye on those she sees closely watching your type (you, of course, notice neither surveillance). But heroes, ah, that’s trickier. Maybe you have that ineffable ‘it’. Maybe you don’t.

She won’t know who you are—and mate, truly, you won’t know—until you rise from the cellar after your encounter with level 1 rats.

Alone In The Dark’s jacket inventory

Recent news that THQ Nordic are “reimagining” Alone In The Dark made me think, as I often do, about a previous time someone tried to revive the seminal 90s survival horror series. 2008’s Alone In The Dark is set in modern-day New York City and features the most delightful visualization of a character inventory I have ever seen: a first-person view of opening your leather jacket and looking down at items held in your many pockets and pouches.

Our man is dressed like a drug dealer or a hawker selling Polex watches in a 90s sitcom. Resident Evil 4’s merchant might be more of an inspiration, given the genre, but I can only see him on A Very Special Episode. Perhaps Melissa Joan Hart or Jonathan Taylor Thomas is hanging around some cool older kids, about to learn an important lesson about personal boundaries, stranger danger, and just saying no.

It is the perfect inventory for a game where our man (voiced by Max Payne) says eg “I don’t have your stone, and fuck you anyway”.

I would very much like to see similar ideas in more games. Immersive sims in particular have slept on this for too long. It’s like “I can see my legs” game design but even better. And even though it can be maddening, I’m thrilled that the game world doesn’t pause when you open your jacket, leaving you scrabbling to craft items without fumbling the wrong key and dropping and shattering vital ingredients.

Thinking about inventory as actual physical objects you carry is mostly confined to serious sims and survival games. Escape From Tarkov splits your gear across many individual bags, cases, wallets, keychains, and so on, nesting storage in storage. And I am delighted that Neo Scavenger lets you carry a plastic carrier bag full of scrunched-up spare carrier bags. But aside from a vague memory of having possibly once played another game which had a similar idea (god, what was it! some other noughties Eurojank?), Alone In The Dark is the only game I can think of which so explicitly visualizes it this way. This jacket inventory is good enough that I am willing to propose it as a possible best thing, despite it appearing in maybe only one game.

Pick your winner, vote in the poll below, and make your case in the comments to convince others. We’ll reconvene next week to see which thing stands triumphant—and continue the great contest.


Disclosure: A pal worked on the 2008 Alone In The Dark, I only learned after spotting several copies on her shelf.