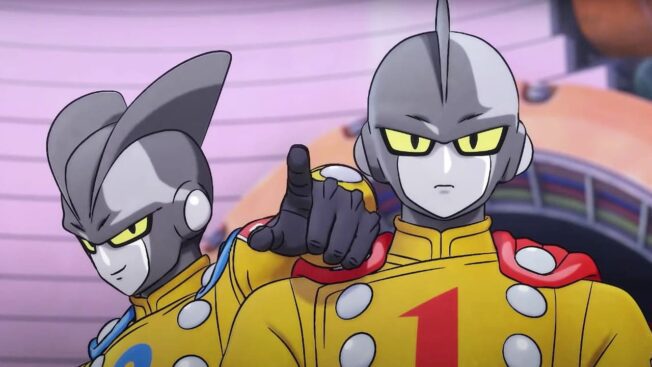 Only good two weeks German anime fans have to be patient, then Crunchyroll will bring them Dragon Ball Super: Super Hero Finally in our cinemas! We were already allowed to see the latest screen offshoot of the venerable franchise and we can tell you, why going to the cinema is worth it!

Superheroes fight for justice – or not?

Already the prologue of the superhero adventurewhich we have already discussed in advance Crunchyroll Expo 2022 was able to watch makes one thing very clear: fans of the first adventures of Son Goku and his friends in particular will get their money’s worth here, because with the Red Ribbon Army an old threat returns. You can also discover some cool Easter Eggs if you look closely.

Since Son Goku and Vegeta currently, however train on Beerus’ planet, Gohan and Piccolo must intervene to stop the villains. But are their opponents really the villains? After all, identify themselves the two cyborgs Gamma 1 and Gamma 2 as real superheroes.

After a relatively leisurely start, the second half continues in the best “Dragon Ball Super” tradition neat to the point. The film literally flew past us, so that itself rather shallow story of the anime blockbuster didn’t carry too much weight for us. This is partly due to how Akira Toriyama, the creator of the brandwhich created new characters.

What really makes a superhero?

In fact, some of the most interesting writing was written the new gamma twins, who with their truly mighty powers seem to be in no way inferior to our two protagonists. This is exciting the character development of the cyborgsas their worldview is progressively turned upside down, which has been both gripping and consistently entertaining for us as viewers.

In addition, fans note that Toriyama-sensei once again contributed to the story, which this time feels comfortably small. Unlike the predecessor “Dragon Ball Super: Broly”, it’s not about saving the universe, but about to free little Pan from the clutches of the villains. It’s a step backwards that left us feeling good.

Luckily, the creator of the brand hasn’t forgotten what has always characterized his popular series: the likeable characters and the little moments they share together. Especially the dynamic between piccolo and pan that he has taken under his wing is real lovely to look at and always put a big smile on our faces.

Also, the connection between our Namek curmudgeon and his other protégé, Son-Gohan lost none of their magic. Dragon Ball Super: Super Hero proves once again that Piccolo probably the best father of the entire anime saga and their relationship, which has developed over many years, is undoubtedly educational the heart of the new anime movie. Even if the makers here riding the nostalgia wavethe moments between them hit the mark.

We also have little to complain about regarding the animations. In retrospect, the Cyber ​​attack on Toei Animation ironically turned out to be a blessing, because apart from a few scenes, the animations look extremely clean. So clean that we didn’t even notice that it was there is not a classic 2D anime! The action scenes, in particular, are excellent and shine dynamic choreographies and imaginative camera work.

Before we wrap up, one last thing: For German dubbing Unfortunately, we can’t tell you anything about the anime cinema film at this point, because we’re still watching the film in the Japanese original and with English dubbing have seen. However, German fans can look forward to the return numerous well-known speakers of the franchise, as Crunchyroll has already confirmed.

“Dragon Ball Super: Super Hero” combines everything that fans of the anime hit have always appreciated about the cult title: Likeable heroes, cunning villains and, of course, banging action! In addition, the 21st screen offshoot of the franchise cracking action as well as really cute slice of life moments with loads of heart and humor that kept us entertained.

For those of you who might have been skeptical about the new very 3DCG-heavy animation style, we can calm down at this point: Especially the great staged action scenes let us regularly follow the events with big eyes and the look seems to be of one piece. Whether you’re a long-time fan or not, you can’t go wrong with a visit to this anime adventure cinema.