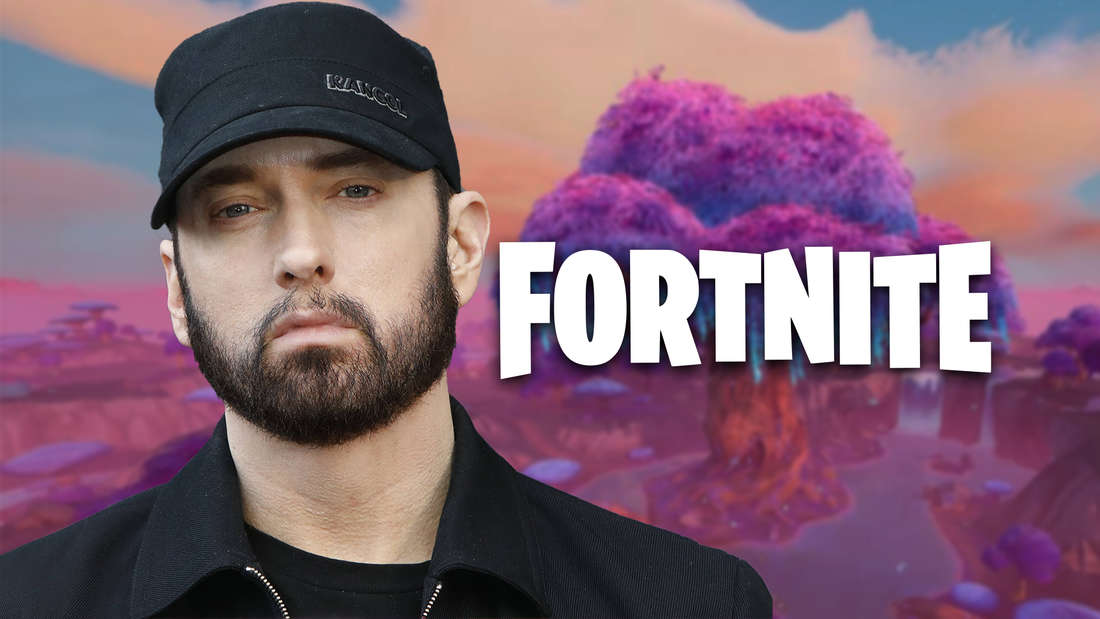 The collaboration between Fortnite and Eminem is confirmed. Now fans want to be able to step into the skin of the rapper in the Battle Royale.

Update from 08/18/2022: So Eminem’s sudden appearance on Fortnite’s Icon Radio was no coincidence after all. Epic Games has now confirmed the takeover of the radio station – and possibly also a collaboration – via Twitter. So far, the North Carolina development studio has not given any further information about any skins or cosmetic items.

It is therefore not known whether and how Epic Games and Eminem will deepen their cooperation in Fortnite. But fans already have wishes and expectations of how the rapper should still perform. The most frequently expressed wish is a separate icon skin for Eminem, with which other musicians such as Anderson.Paak, Bruno Mars and Ariana Grande have already been immortalized in Fortnite.

First report from 08/15/2022: Cary, North Carolina – Again, there are hints of an upcoming collaboration in Fortnite. After Epic Games has recently relied heavily on anime like Naruto and Dragon Ball Z, a hip-hop icon could soon appear in the game again. Eminem is having an oddly strong presence in the game right now, which is why some are now expecting to see the rapper as a skin in Fortnite soon. We’ll show you what’s behind it according to current information.

See also  Tiny Tina's Wonderlands fan is incredibly lucky and gets an item with a drop rate of 1:85 billion

This happened: Cars have been an integral part of Fortnite since Chapter 2 Season 3. In August 2020, Epic Games had installed wheels into the game, which also included a little background music in the form of a radio. Actually, the Fortnite radio stations now offer a wide selection of playlists, but something unusual has recently happened with Icon Radio. Instead of the usual selection of artists like Bruno Mars, Denzel Curry or SZA, US rapper Eminem has hijacked the entire radio station.

These songs are now in the playlist: The entire rest of the Icon Radio playlist has gone, instead you can currently hear nothing but Eminem on the station in Fortnite. And that’s not too short – Epic Games has packed a not exactly small selection of the rapper’s songs into the game, so that you can hardly miss it. These songs can be found on Icon Radio right now.

Some fans and insiders, too HYPEX themselves, now suspect a teaser for a future collaboration between Eminem and Fortnite behind the action. The rapper could possibly appear as a skin or otherwise in the game soon.

Fortnite: Collaboration with musicians has happened before – Epic Games is keeping a low profile

How likely is a collab with Eminem? That Eminem could actually make an appearance in Fortnite is far from impossible. Musicians are always welcome guests in Epic Games’ Battle Royale. Whether as an in-game concert by Travis Scott, a dance emote by Snoop Dogg or a complete outfit, stars have been seen in the game several times. That another of the greatest rappers of all time would cooperate with Fortnite would only be obvious.

What is suspicious about the matter, however, is that none of the big Fortnite insiders found any evidence of a collaboration with Eminem in the game’s files beforehand. Dataminers also discovered the skins for Dragon Ball Z in Fortnite before the official announcement. Either the items have to be well encrypted, or the collaboration is not a cosmetic item, but rather a concert like Travis Scott.

Until Epic Games resolves exactly why Eminem just hijacked the radio icon, one can only speculate about his role in Fortnite. The fact that the entire radio station is occupied by him should not be a mere coincidence.