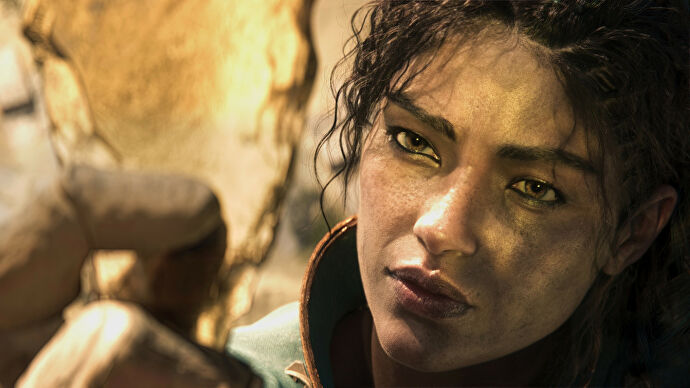 Revealed at Gamescom Opening Night Live, Atlas Fallen is an upcoming action RPG being developed by Deck 13 Interactive, the folks behind The Surge games. It’s eschewing the robotic antics of its predecessor in favor of a Middle Eastern-inspired semi-open world filled with towering blocks of sand, rolling dunes, and mahoosive beasties.

I managed to see a brief 30-minute presentation of the game here at Gamescom, which gave off the impression that it’s shaping up to be a fabulous 7/10 special which will satisfy those craving a AA title to plonk on their shelf. Still, I’ve got to say that in action that combat really looks good.

Now, you’ll have to forgive me for, but the presentation was brief and didn’t give me many more details than the cool trail from last night. Also I keep thinking it’s called Atlas Rising, not Atlas Fallen. Atlas FALLEN, Ed. fall. My excuse for misremembering the game’s name is warranted, I’d say. Atlas Fallen – at least to my eyes – features a character with characterless staples: shiny armor that pulses with blue magic, all spiky swords and capes and masks. Atlas Fallen could be the name of any number of ARPGs with shiny CGI trailers. It could equally be the name of cinema’s next action movie starring Tom Cruise, where Earth has succumbed to rising temperatures and he fights his way into a top-secret vault in the Arctic Circle where agents have held back the frost for generations.

Fights had a lovely flow to them, with bursts of blue as enemies froze after perfect parries and combo-making that would make anyone salivate

Anyway. From what I saw of the actual Atlas Fallen, it looks to be a semi-open world made up of several big areas, all interconnected by a more linear path than your usual “see something, go there” type of open world. And unlike The Surge, it doesn’t have a hint of Soulslike in it, instead opting for more of a traditional third-person mixture of action and exploration. Your primary way of getting from A to B is by gliding around on the sand with your own tootsies, although right at the end of the presentation there seemed to be a player riding about on a big dragon, so perhaps there’s some faster – cooler – Modes of transport to nab later on.

See also  Banjo-Kazooie is rumored to be getting a revival and please let it be true!

Aside from gliding about, we saw the character use their magical gauntlet to manipulate sand and transform it into three or four different weapons, each with their own combos. The whip lets you tag enemies at long range with flowing strikes, while the hammer is a gigantic migraine machine that crunches enemies with huge overhead swings. And we saw these in action against colossal creatures born from sand and itching for a bust up. Fights had a lovely flow to them, with bursts of blue as enemies froze after perfect parries and combo-making that would make anyone salivate; Seriously, the combat is onto a clear winner here.

The world itself looks neat too, being a mixture of crumbling desert ruins, vast dunes and little outposts. It seems like you’re able to acquire special abilities that’ll let you manipulate the environment, or at least traverse it better later down the line, bringing in that metroidvania backtracking side to exploration. For instance, we saw the main protagonist raise a pillar from the earth and use it to clamber across and over into a new area.

And from the final snippets of the world we witnessed, it looks like you’ll have whatever the Atlas Fallen equivalent of orbs are to collect, alongside optional wave-survival posts where the player can fend off some nasties for rewards. Many of these elements seem to feed into your gauntlet and grant you new, exciting powers – presumably different combos and ways to navigate the environment.

My whirlwind tour of Atlas Fallen struck me as quite a good time that was positively crackling with AA energy, but that isn’t actually a bad thing, is it? Here’s to you Atlas Ri- Fallen, a game that’ll creep up on us next year and probably make us all go “Huh. huh!” in surprise and excitement.