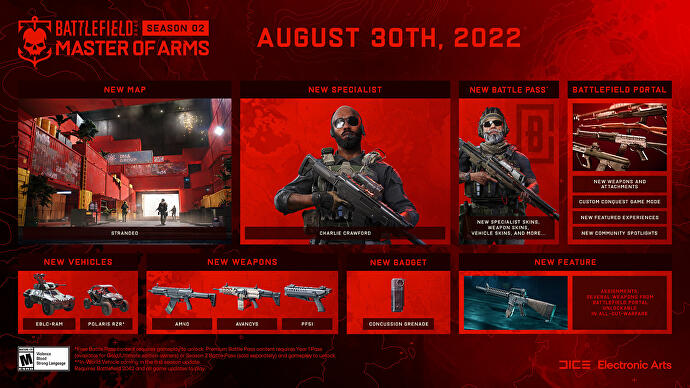 The second season in Battlefield 2042 starts later this month and developer DICE has announced the first information about it.

As far as the basics of the season are concerned, it’s similar to the first: there’s a new map, a new specialist, a few new vehicles and new weapons.

Stranded on the new map

The new map Stranded is a bit smaller than the map Exposure previously released in season one. This further addresses feedback from fans who have complained that the launch maps are too big.

Stranded is the opposite of these large maps, so to speak, and focuses heavily on infantry combat. You still have to do without large-scale destruction here.

The new specialist Charlie Crawford is British. He is a support and can revive teammates faster while replenishing their ammo. His signature weapon is the Vulcan, a deployable minigun with a ballistic shield. It is perfect for defending an emplacement and for covering fire.

To compensate somewhat, she has a limited arc of fire, allowing enemies to flank you. Even a well-placed missile or two is enough to take out the Vulcan.

As far as vehicles go, there are two new four-seaters: EBLC-RAM and Polaris RZR. The RAM feels like something of a hybrid between a hovercraft and a tank with a variety of weapons, while the RZR is a fast buggy that can zip you from one objective to the next.

At the end of the season, even older weapons from earlier parts of the series that are available in Battlefield Portal will also be available in All-Out-Warfare.