Cosplay: Nasty fan favorite from One Piece – you’ve never seen him like this!

If you ask One Piece fans which villain is the strongest, the answers will probably be the same – Akainu is the monster of the navy, while Blackbeard is the terror on the pirate side. But if you ask which villain people like the most, things look different – then one name keeps coming up: Buggy! The iconic captain who has been with One Piece since its inception has carved a place in the hearts of so many fans. Buggy is now even one of the Four Emperors in the manga! And that, although he is actually just a cranky, vain, selfish and cowardly wretch who succeeds through many coincidences. But just such worms have a certain charm. Cosplayer Toopato knows this too – he immortalized an almost impossible look of Buggy in a costume.

One Piece Cosplay: Sexy latex costume of a devilish lady – so awesome!

Red latex & bare skin: This One Piece NSFW cosplay perfectly captures what a sadistic villain would really look like. do you like her

One Piece: Cosplayer makes this villain sexier than ever!

Cosplay makes even the worst monsters sexy: the ingenious transformation of an artist into a one-piece villain demonstrates this perfectly!

Buggy from One Piece as an ingenious cosplay

To celebrate Buggy Day (Buggy’s birthday is August 8th), Toopato shared his awesome cosplay with One Piece fans on Reddit: “Warlord Buggy” is the clown pirate look he’s had since the time warp. The blue-haired captain makes himself look huge by wearing a massive outfit and keeping his hands and feet far from him – possible thanks to his Separating-Separating Devil Fruit, which he can use to separate and levitate body parts. As a costume, this isn’t exactly an obvious project. But Toopato captures the megalomania and the costume great:

Here is a comparison to the template in the anime:

Cosplay on stilts – is it dangerous?

The grinning face, the absolutely GORGEOUS captain’s hat and the great demeanor – great! Incidentally, the cosplayer uses stilts for this costume, which sounds pretty dangerous, but Toopato explains: “I haven’t fallen yet and I’ve worn it twice so far, plus it feels like people are moving like I’m parting the sea. I’ve definitely had a few close calls, sometimes I need the fabric stand in front of me like an 18th-century woman.” Regarding the costume, which mainly relies on the imposing hat, he says: “The hat is made out of 2 sombreros which I then covered with felt. It was quite difficult to get the shape right but it was fun.”

Buying tip: Buggy is available in a special movie costume as a great figure on Amazon!

It’s also funny that the cosplayer looks a lot like the actor confirmed to play Buggy in the Netflix series with a costume he created years ago: 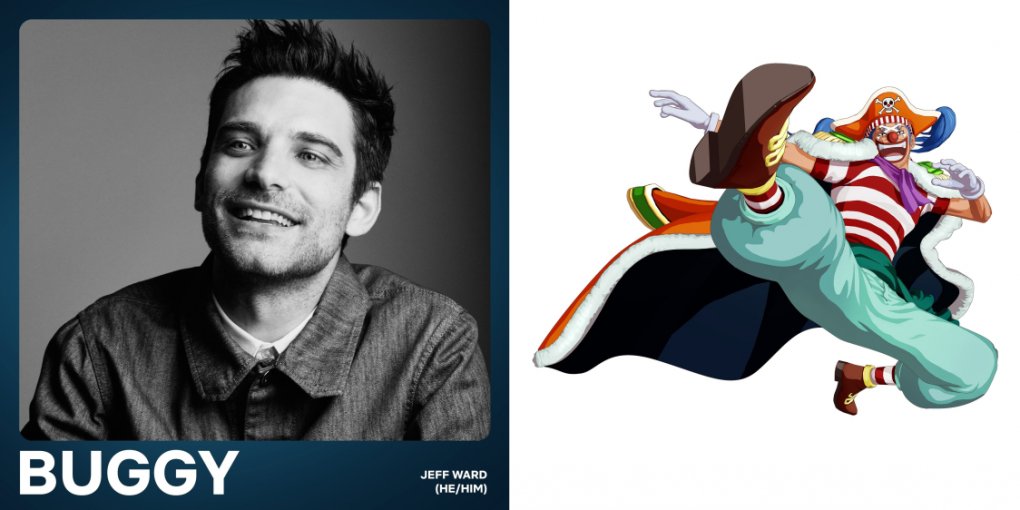 Jeff Ward will play Buggy in the Netflix series One Piece.

Ward (Agents of SHIELD) will take on the role of the murderous clown. We also have more information about the cast of One Piece on Netflix ready for you! What do you think of this cosplay? Are you looking forward to the Netflix series? Are you actively reading the One Piece manga? Write us your impressions in the comments!