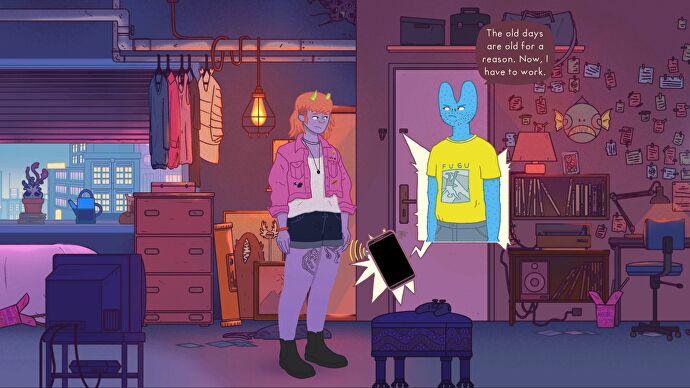 A slice-of-life game about a demon punk rock band having a quarter-life crisis? Dead Pets Unleashed looks exactly like my cup of tea, or rather, a fizzling concoction of Red Bull, battery acid, and popping candy. After launching a Kickstarter campaign, developers Triple Topping have released a Dead Pets Unleashed demo, so players can get a taste of the highs and lows of band life and, after playing the demo myself, it’s definitely worth checking out. You’ll wanna turn your speakers up for this one.

You play as Gordy, a 30-something demon and the bassist for the punk rock band Dead Pets. She’s also someone who seriously needs to get her life together. Living in a shitty apartment and barely able to pay rent, Gordy is determined to push for one last shot at musical success with Dead Pets before the band finally calls it quits. The game is a mixture of slice-of-life drama and band management sim as you try and help Gordy get her shit together while juggling her pushy parents, part-time job, romantic interests, and keeping the members of the band together.

From the very first scene, where Gordy is recovering from the world’s worst hangover, Dead Pets Unleashed has an incredible vibe. Void City is full of eccentric demons and cool underworld locations, where everything is super colorful and visually loud. You’ll be bouncing around different locations in the demon capital – dingy diners, indie record shops, greasy hot dog stands, and the like – trying to keep balance in Gordy’s life.

I left each band practice feeling like someone went to town with a pair of drumsticks on my brain, so for punk music that’s a plus

The best minigame is the one at band practice. It’s a rhythm game where Gordy needs to thrash her bass in time to oncoming projectiles that tie into the story. The targets will sometimes be bills from her landlord or love hearts from a boring dude she went on a date with once, and she needs to smash each with her bass. The music is, unsurprisingly, very punk rock and is actually pretty good. Good enough that I left each band practice feeling like someone went to town with a pair of drumsticks on my brain, so for punk music that’s a plus.

Underneath all of the game’s in-your-face attitude is a wider story about Gordy’s personal issues. As a 30-something-year-old, she’s having to make tough decisions about her future, something we can all relate to. Gordy is desperately clinging to her punk rock lifestyle, but she’s slowly realizing that she probably needs some stability in her life and all the banality it entails, like holding down a job and settling down in a relationship. I like that there’s some heart beneath all of Gordy’s anarchic bravado.

The demo does a great job at showcasing what Dead Pets Unleashed will be dishing out, and I’m excited to play more. You can check out the free demo over on the game’s Steam other itch.io page.