Spaceship witch shooter Chorus is worth sticking with on Game Pass 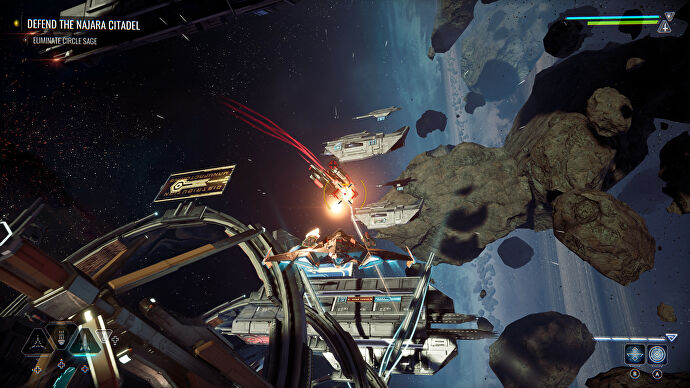 I say with great affection: I would believe you if you told me Chorus was an adaptation of a Canadian sci-fi television show I’d never heard of. It’s a bit silly, really, but takes itself seriously with a galaxy-conquering religious cult, a talking spaceship, and a moody tattooed female lead. This vibe continues with the game’s opening, a cinematic recap of the dramatic and explosive events which led our girl Nara to where we find her now. 100% this recap would come at the first few episodes after the show’s pilot.

I do wish we got to play through that opening, little sections of ultraviolence joined with smash cuts like a spacefaring 30 Flights Of Loving, because the game drops us into a boring section of Nara’s life. Hoping to escaped her dark past and perform penance, she’s eking out a quiet living in a backwater asteroid belt.

I don’t mind that we’re running errands, the problem is that the combat starts out boring, slowly circling to try and get the jump on nimbler (and cooler) ships. What we do see of progression systems makes it seem she’ll only see boring incrimental improvements. I only held on because Chorus review back when the game launched said yes, it does start slowly but it gets better.

I think a slow start is a different proposition on Game Pass. If you’re thinking about paying £35 for a game, you’re likely more invested and willing to make the effort and push through. But on Game Pass, with access to more games than I’ll ever have time to play, I’m maybe a little less forgiving if a game doesn’t grab me. I’ve installed a lot of games I soon gave up on. I’m glad I stuck with this one.

It hardly seems a spoiler to say yeah, don’t worry, Nara becomes a spacewitch again. Being a spacewitch is pretty cool.

Flight and combat are arcade-y, and moreso as Nara grows witchier. On the most basic pew-pew level, you have gatling guns, lasers, and missles which are respectively best at cutting through enemy hulls, shields, and armor. Then, there’s the spacewitchcraft. You can drift, for starters, locking the ship’s velocity then pivoting to take out enemies as you fly past or gun down pursuers. But better than turning around to look at someone behind you is teleporting behind them. And then… ah I’ll not reveal her full spellbook. It feels like cheating, in a very fun way. Your foes are doing their best in their little (and not so little) spaceships with their classic dogfighting techniques then you cast a magic spell and burst them.

Chorus has lots of good sci-fi spectacle. You’ll often weave around space stations, drifting between struts and through rings to pick off their turrets and destroy generators or to lose enemies. To defeat some bigger ships, you need to fly alongside or even inside them to blow up vital parts, a loads of little ‘Death Star trench run’ moments. A great time for fans of flying around really big unreal places.

It’s a gentle open-world RPG at times. Sidequests are scattered around each of the open levels (pretty big spaces separated by jumpgates), and some quests have decisions with little consequences. You can earn and buy new weapons and modules to customize your ship too, not enough to rebuild it as something new but enough to tailor it nicely to my playstyle. And I always admire the cool animations for entering and leaving the station hangars/shops.

I have some grumbles beyond the opening. Its location and waypoint markers can be baffling nonsense. The optional miniquests popping up dynamically are dull. Mission checkpoints can feel a bit off. But I’m enjoying it, slowly progressing a few hours per week. I like zooming around giant space objects, losing any sense of up or down as I chase enemies and spew bullets and magic spells. I like this sad spacewitch whose inner voice whispers fatalistic cynicism after anyone says anything positive. I would watch this Canadian sci-fi show. I will play this 7/10 video game. I’m a big fan of confident 7/10s.

While we’re talking Game Pass, do play What Remains Of Edith Finch before it leaves Game Pass next week. It’s the most fun you’ll have exploring a weird house while weeping.