The Devil In Me is mixing Saw, The Shining, and “really horrible” murders with a dash of true crime 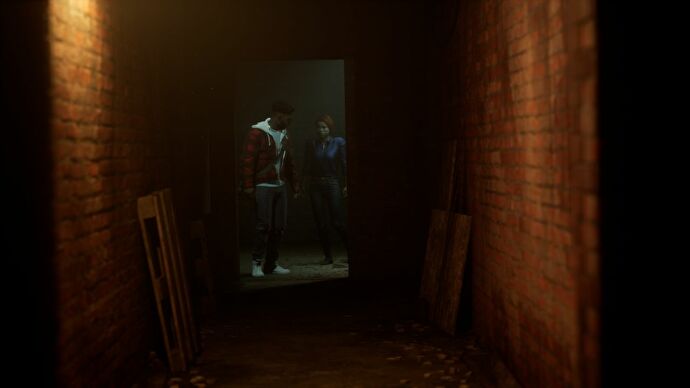 “The thing we’re doing with The Dark Pictures is exploring different sub genres of horror,” explains game director Tom Heaton. The Dark Pictures Anthology is, well, a horror anthology, each a compact standalone scary game where you explore and deal with QTEs and hazardous choices, in the vein of Supermassive’s smash hit Until Dawn. The idea, says Heaton, is that each one takes one or two horror sub-genres and mines them, maybe subverting the tropes here and there. Up next is The Devil In Me, inspired by the infamous Chicago serial killer HH Holmes.

“What I think we decided with The Dark Pictures games early on was that the next game in the series would be very different from the last game, because we want to keep it fresh, we want to give the audience new,” Heaton explains. So, after a zombie ghost ship in Man Of Medan, the psychological witch hauntings in Little Hope, and military squad vs. vampire aliens in House Of Ashes, Heaton pitches The Devil In Me as kind of Saw meets The Shining. It’s a serial killer slasher in a weirdo hotel, and it has a true crime element. And I have to say, it’s probably the most excited I’ve been for a Dark Pictures entry.

If you’ve not heard of HH Holmes in specific you’ve probably heard of him by proxy. That guy who had a special hotel in Chicago for murdering people? That’s your boy Henry Howard. “He’s an incredible character,” says Heaton. “I mean, obviously, he’s a terrible character, but he’s very compelling.” Holmes moved to Chicago and built a hotel to take advantage of the extra visitors coming to see the World’s Fair in 1893. He was arrested and confessed to killing 27 people in his Murder Castle hotel, which was reported to be full of torture chambers, traps and maze-like dead-ends.A line from his confession, “I was born with the devil in me”, provides the title for the game.

“Our game is mostly set in the modern day, about a killer that’s inspired by Holmes. So that allows us to take what we want,” Heaton explains. “It also allows us to be creative with the story and not tied to anything that is that is difficult for us.” Because the thing about Holmes – possibly the most interesting thing – is that basically all of his legend is made up. HH Holmes is suspected to have killed 10 people, but they were all people he knew that he killed for practical, con-man adjacent reasons. His hotel seems to have been pretty normal. Some of the 27 people he confessed to killing were verifiably still alive.

“Once he got caught and realized the game was up, he almost started enjoying it, you know?” Heaton says, citing the over the top speech Holmes gave at his trial, and the elaborate confession. But a lot of the mythmaking was done by the press. “Serial killers always tell a lot of newspapers and this is maybe the first example of it – of a big newspaper culture and suddenly they’ve got a serial killer to deal with,” he explains. “They call [his hotel] the Murder Castle. They drew maps of it and they really made it into something amazing. So the line between reality and myth and fiction is very blurry with HH Holmes. That’s not bad for us.”

“The line between reality and and myth and fiction is very blurry with with HH Holmes. That’s not bad for us.”

I think if anything it works even better with the story idea for The Devil In Me, which follows a small, low budget documentary team working on a series about American serial killers. They’re about to run out of money when they get a call from someone who’s just inherited a replica of the Murder Castle. In the footage I was shown, the group has been split up and are exploring the building, and because we don’t know what it was like in real life, it can be like anything in the game. It’s run down, littered with debris, and the modern-day killer has set up dummies of a construction crew posed as victims, with recordings that sounds all too real… It looks like a great haunted house atmosphere, in other words. This all sounds like we’re crossing into the myth vs. realtiy aspects of modern day true crime, and Heaton says they do “double down on that, to some extent”, though he clearly doesn’t want to give much away.

Previous entries have had a group of students from the same college class, or a small covered ops team of marines. The film crew are a small workplace crew. “They’ve got this great set of interconnected relationships like you do in any workplace, especially small workplaces. There are people that like each other and work together and and support each other. There are internal rivalries,” says Heaton, explaining how Kate (the presenter, played by Jessie Buckley) is ambitious and feels the director Charlie is holding her back – plus, she’s just split up from camerman Mark, but they’re still having to work in close proximity. And these tensions are bubbling against the backdrop of being trapped and pursued by a serial killer.

But their true crime credentials – having studied a lot of other serial killers – has given them knowledge that, says Heaton, could be useful to them if they can work out how to use it. In a first for a Dark Pictures game, each character also has a tool that can be helpful. Kate has a directional mic that can hear through walls, while Charlie has a business card he can use to break open some locks, and in the demo footage you could find and pick up someone else’s business card. Tools get broken, or lent to other characters with a very simple inventory system (Heaton says it’s additive, as they didn’t want to distract from the core of choices and dilemmas). Those aren’t the only changes, either. The Devil In Me is a bit longer than previous entries, running to 7 hours, and exploration has been expanded. You can climb up obstacles and squeeze through gaps, meaning there are secret areas to find. This allows for puzzles: the player can see a place they want to get to, but how to get there? And, in a move that many will be excited about, your characters can run!

Heaton says adding running was a bit of a challenge because of the cinematic presentation of the games (often the camera is fixed but will switch to a different angle than you, for example, walked down a corridor). “It’s nice to be able to take exploration at your own pace. I think a lot of the time people will still be walking but they’ll run to specific things,” he says. “And it’s also of course, drawing on the Saw franchise. So once you’ve got puzzles in, then you actually do want to go back and forth around the level a little bit more; you maybe you have to find a code and you have to look for where that code is, or you have to different things in a puzzle to get it to work. So you’re moving back and forth across levels and, yeah, it’s nice to be able to run in that situation.”

It sounds like running won’t help you, though, as Heaton avers that The Devil In Me has some of the most gruesome deaths of the whole series. He’s keeping any examples under wraps to avoid spoilers, but in the gameplay footage a character is forced to choose which of her companions will die, as they’re trapped in sealed chambers and there’s only enough oxygen for one. Not especially bloody, perhaps, but pretty horrible. “We’ve got a terrific cast and they did a terrific job with the performances,” Heaton says. “There were a couple of deaths where some of the actors went, ‘Oh my god! Who thought this up?’… And slowly everyone would look at me. They are really horrible.”

Saw isn’t the only inspiration, as, aside from the claustrophobic atmosphere and feeling that the building itself is malevolent, that you’ll get from The Shining, the team have also put in nods to classic slasher flicks – your Friday The 13ths and Texas Chainsaw Massacres. In the footage the film crew are followed by a trenchcoated figure, slipping past doors and stalking them through the building. Heaton clearly loves the genre, so I ask him to recommend an underappreciated horror film he thinks people should watch. He says 2018’s The Perfection, a psychological thriller. “It’s ‘perfection’ because she’s a classical music player, but it’s also the perfection of the plot. The plot has integrated twists and turns, it’s very satisfying. And it’s got one of the most horrible sequences that I can remember in a horror film .”

The Dark Pictures Anthology is a series I’ve always really wanted to love, and been a little frustrated by, because you can see it being so almost fantastic. I’m excited now because it sounds like The Devil In Me could take The Dark Pictures Anthology to the kind of grim heights it was always suited to. The gruesome slasher elements mixed seen through a more modern filter like the current state of the true crime phenomenon is exactly the kind of design sensibility that made The Quarry cool. If Supermassive really can pull off giving it some of the unsettling tension of The Shining as well, then we’re surely on to something good, aren’t we? Enter the murder hotel, if you dare, in November.