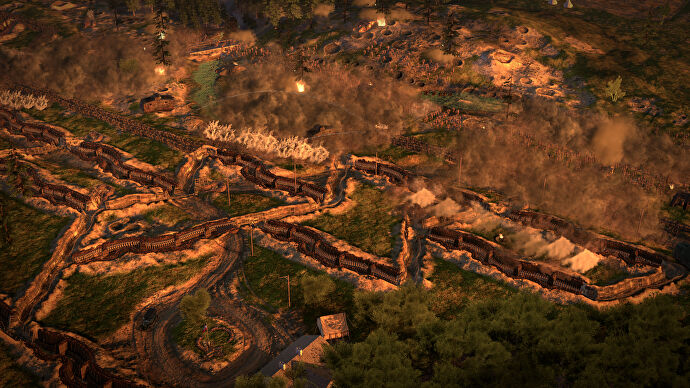 Not that all the other wars were just a bit of goofing around, but World War One – a conflict remembered more for its bleak, arduous trench warfare than any great triumph over evil – seems like a particularly unusual source of inspiration for a strategy game that will, presumably, be played for fun. Nonetheless, The Great War: Western Front, a combination of macro planning and tactical RTS battling revealed this week at Gamescom, has elected to lean right into WW1’s complexities and difficulties rather than dance around them.

Developers Petroglyph have gone for historical accuracy in various ways, senior designer Chris Becker and audio director Frank Klepacki explain to me at a hands-off demo in Cologne. The soundtrack will even include licensed music from the era. But something they want to really hammer home is the brutality of the war: territory won’t be won in heroic pushes but slowly and bloodily, while collapsing morale is as much a danger as any advancing army.

In fact, it’s possible to lose the whole campaign – playable as either the Allies or the Central Powers – if your ‘National Will’ to fight falls flat. Becker opens the demo in Theater Commander mode, the game’s strategy layer, and it permanently displays both sides’ National Will at the very top of the screen. There’s a grid-based map that shows unit positions and Europe’s frontline, but pushing that line into enemy territory isn’t the only way to win. Breaking their National Will through battles, even if ye don’t claim complete, outright victory, will eventually see them surrender.

Along the way you’ll be presented with surprise events, presenting a choice of how to spend or save your resources in a pinch; when asked how to deal with rising cases of shellshock, for example, you can invest in researching proper treatment or preserve your coffers (at the cost of losing National Will) by telling victims to get on with it. Theater Commander mode also includes a gigantic branching tech tree, covering everything from weapons and technology improvements to economic measures and espionage tactics. Becker opts to invest in Death From Below, a perk that can provide an edge in future battles via shovel-wielding saboteurs digging under the enemy lines and planting explosives right beneath their sodden boots.

Performing this kind of prep work seems just as vital, if not more so, to the RTS battle mode as your actual troop movements and firing orders. Back in the Theater Commander view, risking a spy mission can reveal enemy infantry and equipment numbers – details a more forgiving RTS might give up freely. Then, if you choose to engage, there’s a lengthy (lasting a month of in-game time) and highly detailed setup phase where you’ll need to build trenches, communication lines, and weapon emplacements.

There are no hero units here – The Great War wants to stick to the trench warfare of the time, and with no man’s land offering little in natural defence, digging the right mud holes could be a battle-winning move. And when you can’t tell what’s going in the other side’s mud holes, sending up a reconnaissance balloon might be your only (albeit low-tech) way of getting a better look.

Such tricks are available to the enemy as well, but Becker demonstrates another pre-battle tactical option by ordering an air mission to shoot down the opposing balloon. To keep an element of fog of war (and possibly staying true to the technical crapness of WW1 biplanes), air missions are limited by both fuel usage and the pilots’ sense of direction. In this instance they make a fairly straight line for the balloon and successfully pop it, but air missions will need to find their objective before they can complete it (in which they’ll move onto another, lower-priority target), and they’ ll need to do so before the tanks run dry.

When the battle begins in earnest – with the objective to capture control points leading up to a final command trench – there’s an instant onslaught from an impressively troop-dense crowd of Central Power infantry. A patch of woodland offers them partial cover in the rush across no man’s land, and a few even make it into Becker’s Allied trenches for some hand-to-hand, but barbed wire and concentrated fire ultimately ensure the attack fails. Time to counter with an assault force: the they-shall-not-grow-old whose job is to make the sprint to the opposite trenches and secure them before less expendable specialists can move in. To make their lives easier, and hopefully longer, Becker has a trio of tanks moved front to absorb fire, and detonates his Death From Below explosives planted earlier to soften up the target. After popping some smokescreens – man, didn’t the Central Powers have any of these? – the first trenches eventually fall.

It’s not long before the first control point is captured as well, but rather than go for the big prize – that command trench – Becker instead calls for a ceasefire, ending the battle. While his assault force wasn’t wiped out, he’s still lost a fair few men, and has spent plenty else in terms of air missions, explosives, and armor. The post-battle screen calls it a victory, but this is still a cutting of losses when going all the way might have cost more resources than it would be worth.

This, Becker explains, is a nod to the “marginal victories” that characterized a lot of real WW1 battles: small advances accepted in lieu of huge gains, when shooting for the latter meant even more grueling trench warfare that could kill or demoralize any remaining soldiers. To really make you feel the weight of losses, they’re listed individually on the post-battle screen, and trying to replace them quickly will cost you. I’m sure skilled commanders will be able to claim less pyrrhic victories, but it will be a legitimate strategy to call ceasefires, back off, and try again later after resupplying.

This, in turn, will mean fighting multiple battles across the same battlefields, with the environmental scars of your previous clashes remaining in place. I got a glimpse of this in the demo, as Becker was forced to build defenses around a vast crater that a past bombardment had left. Deteriorating landscapes will present yet another tactical hurdle to navigate, though you can also turn this persistence to your advantage by re-using previously dug trenches and installed infrastructure.

In all likelihood, you will probably need to pay repeat visits before you can claim a command trench and, finally, nudge the frontline a little further away from home. And ending the war will be a slog, instant gratification be damned, judging by the spoils of Becker’s minor yet undisputable victory. “That’s a lot of National Will!” he exclaims, as I watch the Allied morale bar fill by an additional two pixels.

By will or circumstance, you may even up stretching the war beyond its real end in 1918. For all its authenticity, the direction of the The Great War – the game and, uh, the war – is ultimately in your hands, and the campaign won’t herd Allied players toward an inevitable win or force the Central Powers into a destined defeat. If accuracy is what you’d prefer, there will be another mode – which I wasn’t shown – that more faithfully recreates actual WW1 battles, similar to the Total War series’ Historical Battles mode. Conversely, there’ll also be a skirmish mode – playable solo or in 1v1 multiplayer – that gives you sandbox-level control of settings and units.

Given how the Central Powers’ suicide charge half-gifted Becker a new control point, I am curious to see how The Great War’s battles play out when both sides have human-level intellect and a fully deployed array of equipment; assuming multiplayer gets a similarly extensive setup phase, the scope of tactical possibilities seems dizzying.

Hopefully, skirmish mode can also act as a relatively light break from the intentionally slow-paced campaign; having to constantly think about the game, even to the point of self-limiting success, could prove tiring as much as it could stimulating. Still, Rome wasn’t built in a day, and the Kaiser didn’t abdicate after a week.