A Plague Tale: Requiem – The New Power of the Rats 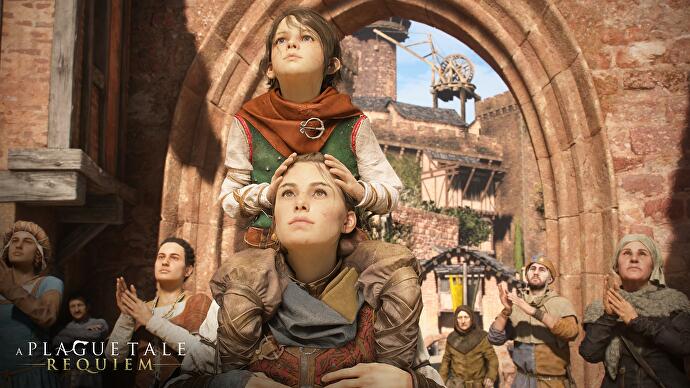 My foresight actually paid off: I only finished A Plague Tale: Innocence in the days before the fair, because I already suspected that the planned allusion to the sequel would anticipate important details of the story. And that’s how it happened. So if you still want to play Innocence without taking these details from our preview, you should stop reading from here on out.

It’s impossible to mention some of the new mechanics without anticipating Hugo’s mysterious ability that troubles him early in the story. After all, he can control the rats with the power of his thoughts, which not only transmit the plague in southern France in the 14th century, but also eat French inquisitors and civilians as an aggressive pack. By the way, the way the dark rodents attack people like a kind of overturned whirlpool still looks pretty cool today.

Just a quick refresher: Amicia and her little brother Hugo are basically just as at the rats’ mercy as all other people, but use torches and fireplaces to make their way through the light-shy animals. If they encounter humans, Amicia can also turn off their light sources, allowing the rodents to do the rest. Or they sneak past guard posts very carefully. Because in a direct duel, neither Amicia nor her brother stand a chance against the burly, armored men.

Stealth therefore plays a big role, and an even bigger one this time, as developer Asobo Studio has expanded Amicia’s scope of action while continuing to lead her brother by the hand. The two now crawl under low structures to hide from guards and briefly disable individual opponents if they initiate a counterattack in time. With her new crossbow, Amicia also shoots enemies with head protection and if she hits them with a charge of tar, they can’t see anything for a while.

In other words, it’s now easier to defuse sticky situations, making it easier to return to sneaking when you’re in a threatening situation. Of course, the dynamic cat-and-mouse game of Metal Gear Solid 5 or The Last of Us: Part 2 is nowhere near as good. But I felt a lot more comfortable in the gamescom demo than in the previous one.

I had switched off various aids to see whether sneaking also worked without, for example, nearby guards being artificially indicated by markings. And that actually works perfectly. Only when the two are hiding while crawling does Amicia’s head sometimes block the view, so that you can’t even look around to see the right time to come out. I also only used Hugo’s new ability to establish a kind of telepathic connection with the rats, thanks to which all enemies are marked through walls (because the animals can feel the blood of the people), because that’s what it’s supposed to do there. I don’t like X-ray vision, no matter how it’s explained. But it’s even nicer that you don’t need these crutches at all! And good, of course, that they make life easier for less stealth lovers.

In any case, that’s not Hugo’s only new trick, because depending on the situation, the unconventional blood connection gives him completely different abilities. In a later scene, part of the swarm of rats is directed towards the victims, for example from the ego perspective. This underlines that dark note of the adventure, which is also addressed by the fact that Amicia has to kill other people again to protect herself and her brother.

See also  CoD Modern Warfare 2: PS4 and PS5 are rumored to be the first to benefit from the beta

It’s the plight of the hunted with no other choice that Asobo seems to take even greater prominence this time around – in part because Amicia is wounded in at least the playable demo chapter, having sustained a major injury from a previous fight. In between, you experience even more fantastically beautiful scenes than the last time, because the developers again lead their protagonists through technically high-quality and stylistically impressive landscape shots.

According to the first impression, A Plague Tale: Requiem picks up where Innocence left off and continues the story about Hugo and Amicia without any major surprises, but pleasantly convincingly.