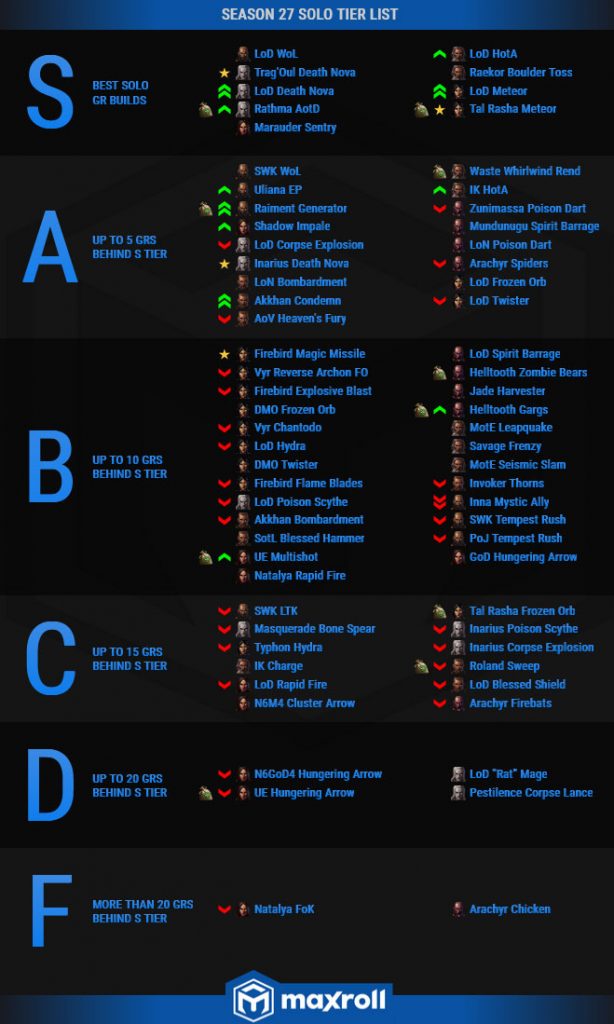 In the Tier List for Season 27 of Diablo 3 we show you the best classes, builds and items. We are taking into account the balance changes from patch 2.7.4.

What’s happening in Diablo 3? Season 27 starts in Diablo 3 on August 26th. Patch 2.7.4 begins the new phase and brings the “Call of the Light” as a seasonal theme. If you play a seasonal character in Season 27, everything starts from “zero” and the race runs at level 70.

Here in the Tier List we show you the classes and builds that have the greatest potential in Greater Rifts in Season 27.

What makes Season 27 special? With the seasonal theme, Blizzard gives each class unique bonuses. In Saktuario you collect consumables (Angel Crucibles) that you can use to upgrade Legendary Items to Sacred Items. A Holy item then randomly gains one of three class-specific enchantments.

These changes also affect the meta.

Who creates the Tier List? We use the tier list from maxroll.gg as a basis. The website develops this tier list with extensive tests and mathematics. Behind it is the team around Rob, Wudijo, Northwar, Facefoot, Raxxanterax, and Chewignom.

In the article we show you the tier list as a graphic and go into the top 3 builds of each class on this and the following pages. There is also a link to the build so that you can easily recreate it and understand the mechanics.

What do the classifications “S” to “F” mean? With these classifications, we show you which builds have more potential. So a build from the S tier has the most potential for best performances in the Greater Rifts. An F-Tier build is still strong, but with less potential.

Use the tier list here as a rough guide to the strongest builds. Ultimately, what counts in Diablo 3 is that whoever grinds more and has a higher Paragon level becomes stronger and can push many builds up the rankings.

We show you here: On this and the next 6 pages of the Tier List we show you the top 3 builds for Barbarians, Demon Hunters, Witch Doctors, Crusaders, Monks, Necromancers and Wizards. Click on the links behind the builds to read the full explanation on the maxroll.gg website. There you will find all items, gems, skills and runes.

If builds are named “LoN” or “LoD” then these are abbreviations for the legacy bonuses. These are obtained from a Legendary Gem or a set of rings.

The 3 best builds of the Barbarian in Season 27

See also  Stacklands is a village-building game of cards

On the next page, we show you the top three Demon Hunter builds in Diablo 3 Season 27.