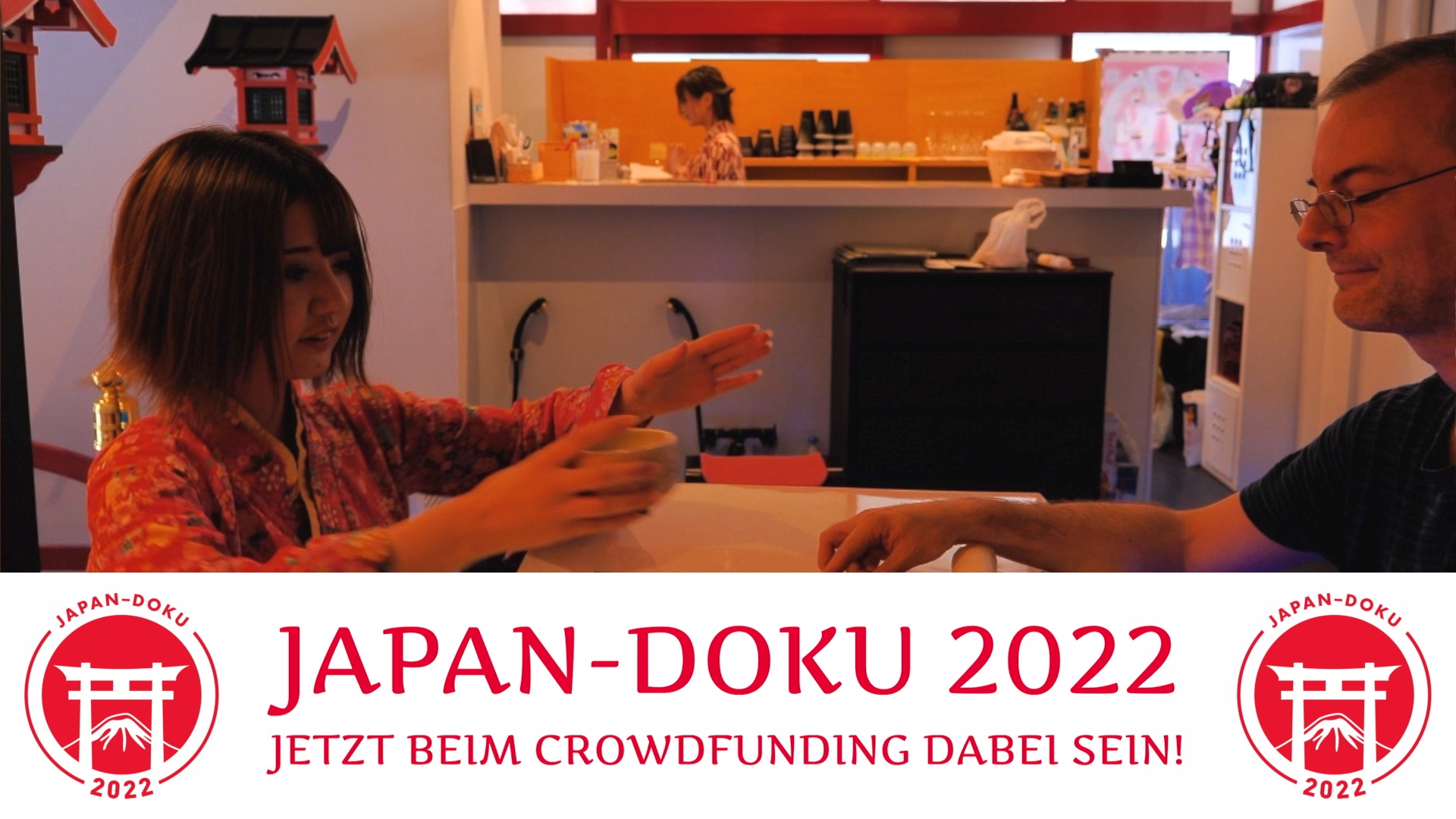 Crowdfunding for the 2022 Japan documentary is in full swing. To mark the occasion, we are making the 15 episodes of the Japan documentaries 2018 freely available in 1080p. Episode 13 leads to a colorful variety of theme cafes.

Alternatively, you can also send us a bank transfer directly to our account; write “Japan-Docus 2022” behind your user number (see profile):

Since 2018, the Japan documentaries 2018 were only available to crowdfunders and buyers. We are now releasing the 1080p versions free for everyone (however, the making of is subject to a fee). If you like them, join the crowdfunding for the Japan documentary 2022 – and get all 2022 episodes for the special price of €10 (only until the start of travel!).

If you want, you can also Buy 2018 documentaries in 4K, including numerous extras. The extra-long Making Of (Episode 16) and a number of extras are then also included.

Longtime connoisseurs of Jörg’s Japan documentaries have already been to a maid café with him, namely in the 2016 video “Jörg Langer in Tokyo”. Back then it was a very shaky and, well, undercover shot. This time, however, your Japan reporter walked through Akihabara with a proud chest and a raised camera – and was already expected…
See also  Apple to launch special edition AirTag in Japan in January 2022

What are theme cafes? In principle, a skilful creation of value: Instead of specializing in particularly exquisite food quality, everything else is celebrated. This can be dishes and drinks that go with computer games, stroking cats or owls, or, in the majority of cases, young women in costumes. The offer ranges from “dingy bar on the 5th floor of a backyard building” to the best location directly at the train station exit. For this episode of the documentary, we tried to pre-select three quality theme cafes: the Square-Enix Cafe at Yodobashi Akiba, the Sinobazu Ninja Cafe, and the lesser-known but very interesting Miko Cafe near the Kanda Shrine.

Of course we also talked to the maids to get the real “customer experience”. And as is so often the case in Jörg’s documentary videos, there is also a completely unplanned interlude in between.

​​​​​​​Fun fact: The payment process in the Miko Cafe cannot be seen in the final video, but it is still recorded. We had announced ourselves in this theme cafe and had been given time and interview partners accordingly, and everything worked out well. We were even allowed to film the customers – from behind – (in the Ninja Café we were put on our own floor so as not to disturb the real visitors, which of course also had its advantages). Anyway, I ordered several dishes to nibble on for the camera. Hard sugar-sweet food on an empty stomach, I can tell you!

Paying then turned out to be a bit complicated: After the interpreter Keimy had made it clear to my Miko that, for whatever reason, I wanted to film the mundane process of paying and we had positioned the camera accordingly, she came shakily with the bill and took my 10,000 Yen note, thanked me politely and disappeared to get the change. As you know, there is no tip, so the exact difference is on the cash tray. However, she stopped after two meters, turned around and brought the bill back. Everything just played, she thought. It then took some persuasion for her to accept the maybe 2,500 yen anyway. And I didn’t get any “quid pro quo” from me like I did at the photo shoot for the Shoya chain as part of the Shinjuku documentary…