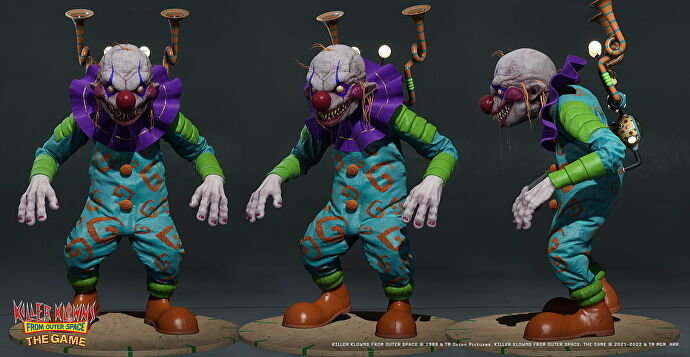 I think it’s fair to say Killer Klowns From Outer Space: The Game was one of the more… leftfield reveals from this week’s Gamescom Opening Night Live bonanza. In case you missed it, it’s a 3v7 asymmetrical multiplayer adaptation of the cult 1988 horror film of the same name, but details on how its creepy clowning around would actually work were few and far between, to say the least. Thankfully, I sat in on a developer presentation earlier this week to find out exactly how it stacks up to other asymmetrical horror film games out there at the moment, as well as how it hopes to evolve and redefine the hide-and-seek genre as a whole.

One thing to say upfront: I didn’t get to see the game in action, I’m sorry to say, but the concept, at least, seems sound. There was clearly a lot of love for the original film in the room when I spoke to the developers, both from Randy Greenback, who was the executive director of Friday The 13th: The Game and now works at publishing label Good Shepherd, and from Teravision Games’ creative director Luis Daniel Zambrano.

“We want to build on that experience that we had with Friday The 13th,” says Greenback. We know the genre works, it’s become a staple now, and fans are clambering for more.”

And ‘more’ is very much the order of the day, here. Of course, having seven players is nothing new. Friday The 13th did that back in 2017. But as you may have already surmised, there isn’t just one killer in Killer Klowns. There are three, and this newfound co-op experience for the offensive team is what Teravision hopes will make for “more exciting, memorable moments”.

There are five different Klown classes to choose from – Spikey the Tracker, Shorty the Fighter, Chubby the Tank, Rudy the Trapper and Jumbo the Scout – and all of them are based on different Klowns from the film. As you’d expect, each one has their own unique weapons and abilities, which Greenback hopes will make them feel more like five distinct killers for players to contend with, versus just the one from Friday The 13th.

There are three powers they all share – a laugh that can heal them and shield them from damage, a ray gun that can cocoon players in candyfloss so they can be carried back to their space ship, and a giant klown jump that lets them teleport anywhere on the map that’s already been explored by klown invaders. Greenback and Zambrano didn’t go into specifics of how often players would be able to use these abilities in quick succession, but they did explain how human players would be able to escape their fluffy pink cocoon prisons. The easiest way to break free is by using a knife – if they’ve found one in the environment, that is. Other players can cut them out, too, but they’ll need to be quick about it, says Greenback.

“There’s a demon inside, so the humans aren’t dead yet. They have about 30-40 seconds of life while they’re in there, we’re still balancing it, but somewhere in that time region probably,” he says. “If [other] people are around, you can tap a button and actually extend your life so you can buy time for them to save you. But if you know you’re all alone and you want to get back into the match faster, and you don’t mind wasting a life – and lives are pretty important – you can tap another button and kill yourself faster. So there are different ways to handle that.”

Indeed, it’s the lives system that intrigues me the most. Human players also have five classes to choose from in Killer Klowns – sneaky but weak Teens, agile but inept Punks, weapon proficient but unlucky Cops, strong but noisy Bikers and handy but oblivious Rednecks – but when they die, their next class choice is determined but what NPC characters are still left alive on the map. You see, human players have a collective pool of 25 lives to share between them, made up of eight teens, eight punks, two bikers, four rednecks and three cops, so you’ll need to pick your next class carefully on your next respawn . Bikers, for example, are the only class that can carry two heavy weapons at the same time, so you might want to keep them in reserve when you need to, ahem, bring out the big guns.

Of course, the Klown team can pick off these NPCs as well, potentially leaving you with even fewer options at your disposal depending on how they play the match. Klowns, on the other hand, can respawn indefinitely (and also switch class like human players can), but there are ways to fight back. Your ultimate goal in Killer Klowns is to end the invasion by breaking into their space ship and destroyings power core, which you can do by grabbing a severed klown hand to grant you biometric access to it. Or, you can repeatedly fix up ways to escape the world of Crescent Cove, and each successful attempt will gain you back an extra life.

“We want to keep players engaged in the game world, doing stuff that’s meaningful to them,” says Zambrano. “When you as a human play die or escape, you can respawn by coming back into the match and taking over one of those NPCs. That keeps the game exciting. Now I need to be a cop! Or now I need to be a biker ! Players will die a lot in this game, and it will feel more like a klown invasion. It’s a better horror experience, because horror is about the killing and the deaths, right?”

Hopefully, these NPC bodies won’t be massively easy targets for the Klown players, either, as Greenback says the NPC’s AI “starts out looking like they’re populating the city, like legitimately – they’re walking around the map living their life .If they see a klown, as long as the klown isn’t doing anything, they’re fine with it, they’re not going to be afraid, they’re not going to run away klown attack another human or get attacked themselves, they’ll run off and go hide in a building, so the city kind of clears out naturally in a way that feels like a real invasion.”

The team at Teravision also hope to support Killer Klowns for the long term, too, adding new maps, time periods and more with subsequent updates and seasons. For now, though, they’re concentrating on getting their beta ready, which you can sign up for over on their official website. The game itself isn’t set to launch until early 2023, but until then, you can also find out more over on the game’s Steam page.