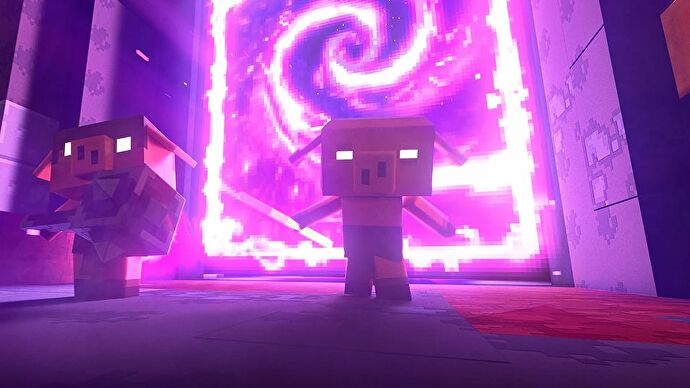 Minecraft Legends was first announced at Geoff Fest earlier this year, and a smidge more footage dropped again at a Nintendo Direct Mini. But despite both of these events, it’s been difficult to ascertain what the game actually, well, is. Aside from being a real-time strategy spin-off, there’s been nothing else to scan with our eyeballs for more info.

Color me intrigued, then, as I sat in a quickfire presentation at this year’s Gamescom and bore witness to some mythical gameplay. I can now report that what Minecraft Legends appears to be is as mix of real-time strategy and building, made all the more approachable by being set in Minecraft’s colorful cube-verse.

With Minecraft Legends, you’re dropped into a procedurally generated map that’s littered with resources you can gather and evil Piglins (pig peeps). They’ve scarred the land with horrid forts, which house the netherportals that won’t stop spawning the bastards in. Your aim is to harvest the resources, use them to inflitrate the forts, and destroy the Piglin portals with a combination of stern leadership and savvy building.

The presentation started with the demoist overlooking a Piglin fortress, all jagged towers and gloomy auras in stark contrast to the colorful greenery around it. They clambered upwards to get a better view before – as you’d expect – some building begins, because it’s important to prepare for a big fight. This is where the devs made it clear that construction isn’t done “block by block” like in regular Minecraft, but is a lot more immediate, letting you snap things down and briefly wait for them to assemble themselves, so long as you have the resources. It makes sense in a game that’s less focused on crafting a home or a beautiful space, and more on functional chunks that’ll serve a very specific purpose.

For instance, the demoist rifled through their hotbar and selected all the bits necessary to construct a temporary encampment in the cliffs overlooking the fortress. Spawners let them create damage dealers and moss golems to heal or tank damage. You’re able to command you followers with a simple button press, and it’s easy to tell if they’re going to receive your orders thanks to a large command radius that expands outwards from your person.

And what ensued in the demo was a siege on the Piglins, led by a blocky fella on his horse meting out commands to his fellow troops to hit the fortresses’ key structures. From what I gathered, your job here is less about dishing out the hardest hits like some unstoppable army commander, but to act as more of a support system for your troops. They’re the ones capable of topping fortresses; you cleave through things in their way and make sure they’re carrying out their tasks effectively.

Although I will say that it’s a bit difficult to read how clear commands and follower responses are in the thick of battle, especially when there’s a whole host of blocky bodies scrapping away at your feet. Still, maybe it all becomes understandable once you’re the one behind the controller, as opposed to the one sat on a sofa having just ingested a chilli-cheese hotdog.

After the demoist’s minions destroyed a lava coil, a massive Piglin roared in a cutscene and the menu screen signaled it was time to wrap up. It was a short button, but definitely shaping up to be a fun mix of real-time strategy with the Signature building twist that being set in the Minecraft universe brings. honestly? I’m desperate to actually give it a whirl.