Minecraft Legends: It could also have been called Block Pikmin 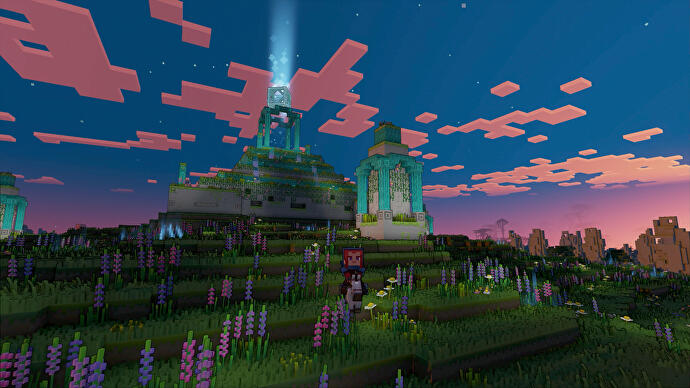 Blackbird Interactive, something is ringing. Of course: This is no less a studio than the one responsible for Hardspace: Shipbreaker – after all, my previous game of the year and, by the way, now also has a September date for the PS5 and series conversions. In any case, there is also… oh, right! Homeworld 3 is also being developed there. And Minecraft Legends, which is supposed to take a new side to the principle of “something with big blocks”.

It should be entertaining, not strenuous real-time tactics when you travel as a mounted hero or heroine through a procedurally created world at the beginning of each campaign. There you fight against Piglins, who come from the Nether to the upper world to maul its inhabitants. This is how you protect villages from the attackers, whose inhabitants then provide resources with which you can then build buildings and summon troops. Even zombies and other otherwise rather nasty overworld creatures become helpful extras when you save their (non-)life.

Alone heroine or hero makes very little. Sure, you get flat individual villains. But the big bases that house not only gates to the Nether, but also high walls, shields and other defenses – for that you need troops that follow you in a similar way to Nintendo’s Pikmins. To do this, you select, for example, all ranged fighters or all nearby units, assign them a target and off you go.

Before that, however, you have to build a small base yourself, to which you will be reset in the event of death, and where you can also build spawn points for all desired troop types. From there, Blackbird’s hero in the gamescom presentation (we haven’t been allowed to play ourselves yet) marches down a steep slope, which is made easier by additional ramps that have been built so that the small army doesn’t lose half its health on the way.

It’s completely open where you build what, and you’re obviously free to decide which villages and creatures you make friends with. There don’t seem to be any quests that say “Do this!”, “Do that!”, just the generated world complete with the nether portals and the villains pouring out of them.

You play the whole thing with up to three friends or against each other – the latter is only hinted at at the moment. Details will follow later. If you ask me: At least it doesn’t look like an urgent must-have to me. But it could be a lot of fun if the tactical challenge is not lost in the procedural design.