Rollerdrome review: a difficult but stylish skater-shooter that’ll give you a shot of adrenaline 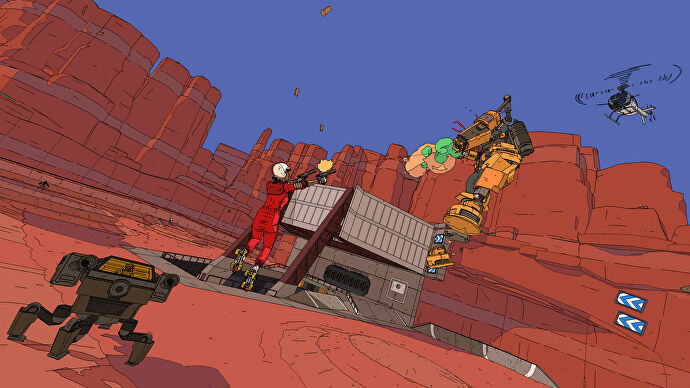 Rollerdrome review
A stylish, slick skater-shooter that’ll give you a shot of adrenaline, Rollerdrome’s sudden difficulty curve might put some players off, but it’s rewarding if you stick with it.

Rollerdrome is an all-action skater/shooter set in a dystopian, but near, future. Protagonist Kara Hassan is the newest competitor in Matterhorn’s games, hosted by the corrupt International Rollerdrome Federation. Your job is to skate through 12 intense arena maps battling both the house players and yourself, dodging attacks as you replenish your ammo with sick tricks to stay in the fight. With enough combo multipliers and top completion times, you might come out as the champion.

Being able to skate at full speed without fear of crashing made me a more creative skater. I’ve always had a precarious relationship with roller skates; they look cool, but actually using them was another matter. I remember playing a skating character in Streets Of Rage 2 and I smitten, but my skating ability didn’t translate to real life. A grand tumble or two was enough for me, and I was done for good… or so I thought. Rollerdrome seamlessly invited me back into a sport I thought I was done with by implementing smooth shooting and an exciting neo-futurist, visually stimulating environment.

Rollerdome’s story has a dark undertone, one that surprised me given its vibrant color pallet. The game adopted a cool contrast of colors, as well as the distinct black outlines of cel-shading that ehanced the entire map. It looks great, but also let me see all the house players at once, allowing faster responses to threats on my part (Apex Legends, I’m looking at you!). The distinct style reminds me of cult classic Killer7, which also had a stark dichotomy between its dark themes and bright colours. Here, though, because Rollerdrome is built on its style of play the story compliments the game, but never overtakes it – even though I would have liked to see more from it! Heck, I’d even take an animated movie adaptation, although the story could easily be built out in a multiplayer mode, which the game is begging for anyway.

Currently, though, there’s only single player. Success in Rollerdrome requires attentiveness to keep out of the crosshairs of the house players. The initial enemies you’ll encounter are the heavy rocket launcher, the grunt (irritating but you’ll come to appreciate him) and – every player’s nightmare – the sniper. This particular enemy is one of the reasons why this game requires your full attention, otherwise you’ll face a swift game over.

High levels of patience and attention are paramount. You need a lot of focus to throw down a cheeky nose-grab to replenish your ammo, evade the sniper’s bullet and pull off the most outrageous shot ever, and doing it makes you feel wicked. Some conventional shooters feel like they could be played in your sleep, but that simply isn’t the case with Rollerdrome. Prepare to be punished if you fail to adapt. But this is where reflex time comes into play…

The game has a Max Pain-esque feeling. Any event in Rollerdrome becomes cinematic.

Reflex time allows Kara to slow down the action with the push of a button. You have ample opportunity to delay any moment, providing time to manipulate your propulsion aggressively and shoot before enemies can react. Reflex time lets you get the lay of the land and strategize your next move before you attack, and it quickly becomes an entertaining, crucial feature. You get the feeling that, as well as being practically important, it’s also there for the rule of cool, because it gives the game a Max Pain-esque feeling. Any event in Rollerdrome becomes cinematic, almost whenever you want.

Despite Rollerdrome’s usual terrific speed, though, you’ll find that you’re slowly being conditioned to handle it. You come to realize that the game isn’t that cruel. There are no crashes, bumpy falls or failed tricks; instead, your avatar performs a combat roll and continues about her business. That’s not to say it’s easy, because Rollerdrome is extremely difficult. I found myself farming the grunt enemies for health, which seems to be how Roll7 intends the game to be played. The difficulty ramps up, and by mid-game there were countless moments where I would be desperately speeding through a map with little to no health. At these points it felt like Rollerdrome was forcing me through a sort of shock therapy compared to the gentle training of the early game, in the hopes that I came out of the gauntlet a seasoned skater. It’s all about momentum; you either sink or swim. Or skate.

However, these moments were alleviated by the exhilarating feel of survival if I did pull it off, and later in the game Kara welcomes more, bigger weapons (goodbye low-damage Tomb Raider pistols, you won’t be missed). The grenade launcher was my favourite, and the ragdoll effects of enemies being flung into the air by a well placed grenade more than made up for my grievances.

To access these higher stages you must complete challenges, like beating times or defeating enemies in a certain way. Upon receiving the notification “Complete 40 challenges to unlock”, I was flabbergasted. I didn’t know if I had it in me to revisit the maps I’d scraped through. I just wanted to get on with the tournament, and I wondered how many players felt similarly. If the accomplishment was survival, Rollerdrome seemed invested in stopping the momentum it had built up.

Luckily, there’s an Assist feature that allows you to change a number of variables like having infinite ammo to (thank God) no challenges at all, although Roll7 anticipated gamers like me, as this mode removes scoreboard entries. Sheepishly, I didn’t change the settings, and instead went back and intentionally started to become calculating with my moves. I still died a few times, but now with an awareness of trends to exploit; I learned to replenish my health with a quick backflip while moving to dispatch enemies, for example. That process of growth epitomizes Rollerdrome. It isn’t for everybody, but if you’re committed you’ll improve exponentially.

This primary focus on the skating and shooting elements could be perceived as a neglect of other features. The music is atmospheric, mostly synthwave with a pinch of modernization; it was something my dad appreciated, it reminded him of 1975’s rollerball, but for me it became monotonous in a way that contrasted with the action, especially after dying a couple of times. The repetitive, pulsating beat seemed to have a draining effect on me and I slowly lost my edge. Muting the in-game music and playing my own selection actually felt more appropriate.

But seeing Rollerdrome’s appeal is easy, and my criticisms are few, and seem to have easy fixes. Everything about the game is polished and precise, and while its difficulty could intimate some, Roll7 appears to know how to cater to its demographic, and it’s rewarding if you stick with it. I’m keen to see its future – in a non-dystopian way.