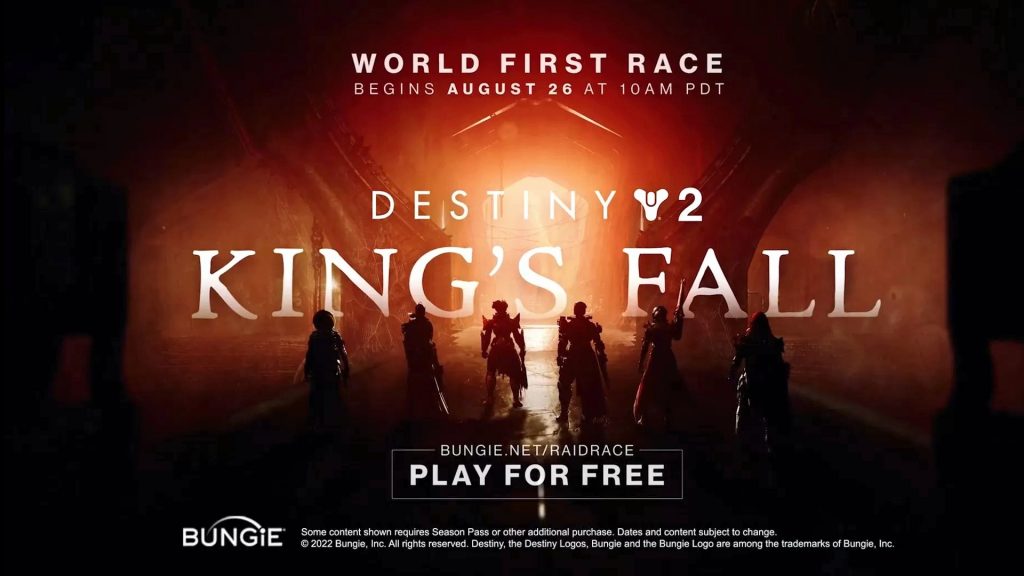 Last night Destiny 2 started the World First of the King’s Fall Raid. The best guardians of the loot shooter had gathered at 7:00 p.m. under the watchful eye of Bungie. They all wanted to topple Oryx again as the first team. We tell you who came out on top and how close the race was.

What raid race is it? In Destiny 2, the legendary “Kingsfall” raid celebrated its return to Destiny 2 yesterday. Bungie had revealed it in the big showcase as the next legacy raid that can leave the content vault.

Although the start date with a Friday at 7:00 p.m. was not optimal, many well-known Destiny players still found themselves together. They wanted to face the king again in the more difficult competitive mode of the World First race.

What is the competition mode again?

In Competitive Mode, all players are matched to one level so the only way to win is good team coordination.

Even a higher power level does not bring any advantage, because each player is limited to a maximum of 1560 power by Bungie’s specification. The special challenge of the raid is to master the raid with 20 power levels too little. And that’s something that even experienced players clearly feel. Enemy shots hit harder and you can take less of them.

However, whoever manages to master both the raid and all challenge triumphs with these requirements will win the prestigious race for the day-one competition. In this case, the second Worlds First, as it were, since King’s Fall was mastered for the first time in 2014.

Traditionally, Bungie is holding a day-one race to mark the start of every new raid in Destiny 2, both for the new paid and free Legacy Raids.

How long did the raid last? Although the Kingsfall raid has some encounters, the raid race, including all challenges, was already decided after 5 hours.

Two of those records were set by the well-known and elite Destiny 2 Clan “Elysium” set up – and in a row.

Just a few minutes after 00:00, the leading team “Elysium” returned to orbit after successfully completing the final challenge. Shortly thereafter, Bungie announced on Twitter, “We have received reports of the first World First completion of Destiny 2 Kingsfall.”

After checking whether everything was going right, the result was clear.

How close was the race? The fight for the PvE victory was a tough head-to-head race between the clans “Math Class” with date“Elysium” with Saltogreppo“Unparalleled” with All The Players such as panorama from “Silimar”.

Elysium brought a lot of confidence from previous wins. However, they were only able to catch up with the other teams at around 10:35 p.m.

All_The_Players of Unparalleled initially got ahead of them with a finish in just 20 minutes in the Totem Challenge. And Datto was able to keep up and was determined to finally break his personal curse in 2022.

However, he and his team suffered a setback in the fight against the Daughters of Oryx. They could do good damage with the Divinity and multiple Linear Fusion Rifles, but then messed up the final boss’s “Rage Is Near” stage.

The Golgoroth Passage was one of the most challenging encounters in the King’s Fall raid for many teams.

At the end of the raid race, it was clearly noticeable that the fast sprints at the beginning of the Kingsfall raid cost the initially leading teams a lot of concentration. Elysium, on the other hand, proved its solid raid marathon skills. This ensured that they had enough stamina left, especially towards the end.

Another tactic used by several teams was to repeatedly mute the microphones in the live stream. Especially when mechanics or strategies have been discussed. The “competition” shouldn’t get an advantage if fans jump from chat to chat to feed their favorite team the latest information.

This added to the tension: In the run-up to the raid race, there was some news about locked equipment.

Half of the equipment and options in Destiny 2 felt like it was locked, so players, like KackisHDgot slightly sweaty hands a few days before the start of the new raid.

Königfall Raid starts only with small problems: Shortly after the starting signal, the next difficulties arose. Some teams had access issues or were unable to join their fireteam.

One immediately thought back to the disaster of the “Student’s Oath” raid, which also started with a bumpy start and then caused massive problems throughout the evening. However, Bungie responded with a quick background maintenance that apparently fixed the difficulties quickly.

What changed in the raid? Many players were familiar with the original King’s Fall raid from Destiny 1, and with it its Dreadnaught location and mechanics. Therefore, Bungie had slightly changed the totem encounter, for example. And optically a lot has happened in the raid.

When the first teams arrived at Oryx, the final boss of the raid, it wasn’t just his immense size that was impressive again. Bungie also gave it a fresh facelift, removing its yellow cast and making it look better than ever.

How big the difference is could be seen on two comparison images from DestinyTracker.

On Twitch, the King’s Fall Raid Race was a hit

If you didn’t run yourself, you could also follow the exciting raid race on Twitch. The event placed Destiny 2 in third place behind Just Chatting and League of Legends streams with 246,000 concurrent viewers.

More than 96,000 viewers tuned in to the World First race last night on Datto alone. That was just slightly more than Sweatcicle and Gladd (via twitchtracker.com).

And how did the German content creators fare? Of course, our German Destiny 2 content creators were also at the start of the race. underneath the lore expert AndyEdition with his clan Eclipse as well Nexxoss Gaming and Hey_iPhil.

They delivered a solid performance with their teams and also the best entertainment for the German spectators at the Königsfall raid. In the end, however, they could not break the top time of the elite clan Elysium.

When does competitive mode end? Tonight at 19:00 the King’s Fall Raid will end in competitive mode. The raid can then still be played for free by everyone, but the opponents are no longer as strong.

How did you experience the evening? Did you visit the king himself or did the mechanics kill you beforehand? What do you think of the fact that Elysium, with this third win, was able to earn a world championship belt again? Leave us your comments here on MeinMMO.

However, if you are less into the PvE endgame, you may be interested in the new pirate puzzle in Destiny 2 with “cryptic quatrains”.