gamescom 2022 was much better for me than everyone feared 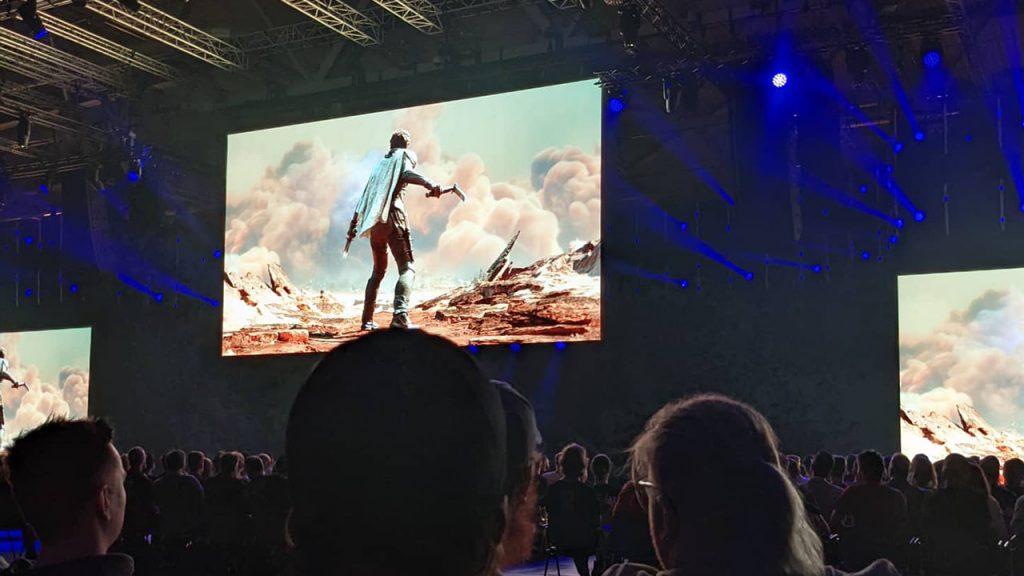 MeinMMO editor-in-chief Leya Jankowski sums up a very special gamescom. The first in Cologne after 2 years breaks in one of the strangest times we are collectively experiencing right now.

Until shortly before the start of gamescom, I am unsure whether the event and the risk of a Covid infection are worthwhile.

The well-known giants of the industry are all canceling one after the other: No Activision, Nintendo, EA, CD Projekt or Sony. Big games that everyone is eagerly awaiting? Nothing. There is so much delay in production due to the pandemic that there is nothing to show now. This is particularly true for the multiplayer and MMO area, so for us here on MeinMMO.

No matter where I look and ask around, there is a negative atmosphere about the event everywhere.

But hey, at least it’s the first gamescom that’s been taking place physically in years. That counts. Curiosity grabs me and we drive with a tiny team into the roaring heat to Cologne.

I expect less than nothing.

gamescom is still one of the biggest gaming events in the world. I notice that again when I walk my feet almost bloody in the huge halls to get from A to B.

Since there are few games on site that I would like to watch professionally, I use the time for many conversations. I quickly realize that after more than two years of the pandemic, we all have to learn to be among people again.

But everyone takes the time to talk. Yes, there is even an extremely high need to look face to face into each other’s eyes and to feel something together that connects us all there: an irrepressible passion for gaming.

36 trailers were presented at gamescom’s Opening Night Live. All of a sudden I’m sitting there in a crowd of people and they’re all laughing, whistling, clapping for video games. That’s hard to simulate online.

Whether journalists, streamers, PR agents, visitors or developers. All are extremely boisterous. This makes everything approachable that feels strange in the pandemic, but beautiful.

people are the stars

I’m starting to wonder why I made my negative feelings about gamescom so dependent on the big games and companies.

Because when I look around, the stars here are completely different. Gaming influencers like HandOfBlood, gnu, Shurjoka or the Rocket Beans are there. The Tiktok booth is one of the largest, where some content creators have an appearance. A good part of the people don’t come for the games at all. At least not only. They have an opportunity there to meet their stars from Twitch and YouTube.

Here we are increasingly noticing a change in gaming, which for me is only confirmed even more at Gamescom. Gaming has somehow gotten cooler and people cry for Twitch stars like they used to cry for the Beatles.

But it’s not just for internet celebrities. One of my favorite viral stories from gamescom 2022 is a brother who buys a penis for his sister and casually walks the halls with the giga phallus. This is reminiscent of a legendary story from 2019 when Fortnite had to explain that nobody pooped in front of their gamescom booth.

All this gives the actually huge gamescom a homely feeling.

Limelight for the little ones

Since the big ones aren’t overshadowing everything this year, the little ones have the chance to shine with all their radiance. There’s a lot more time to explore, and the Indie Arena Booth is the best place to do it.

Since no one has to wait 10 hours for the new big game “with the largest open world yet, a gripping story and endless possibilities”, everyone brings more time with them. The urge to discover was also awakened in me.

My personal highlight is The Wandering Village, coming to Steam soon. A building game where you live on the back of a big monster and you have to take care of it. You can get impressions of the game here:

I want to see you again next year, gamescom

Once again I realize the special power of video games and what they can do for our souls. The last few years have been tough and are now becoming even tougher and uncertain.

But games have the ability to awaken our childish heart and let it beat ecstatically. Exactly these childlike eyes I’ve seen flashing everywhere in the last few days. This is exactly why Gamescom was so much better for me than I imagined before my visit.

Our editor-in-chief Schuhmann also came to a conclusion from the home headquarters: I say: gamescom 2022 already has a big winner – and one game is as good as dead