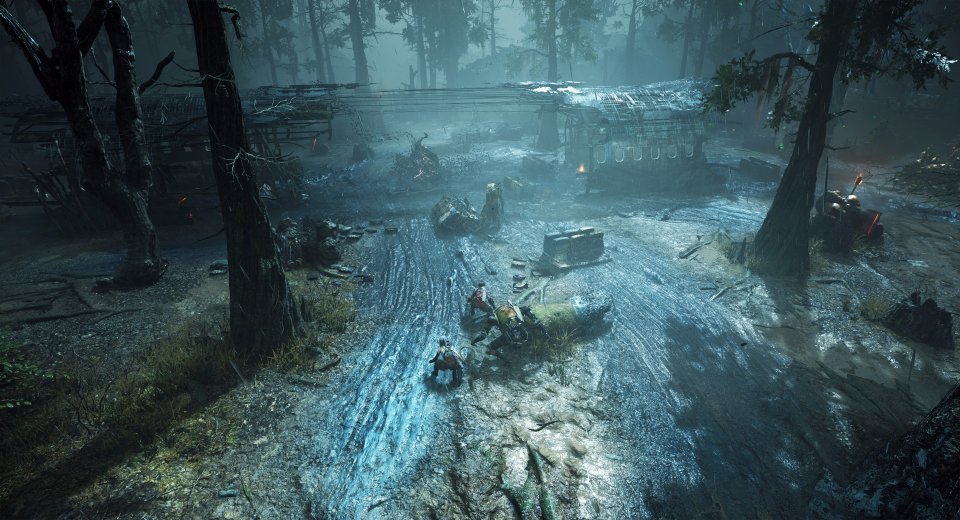 A great wall of ominous particles corrupting everything that approaches them? It’s clear that our target is right behind the wall of devouring. And as if it were preordained, we are the only ones able to control the shifting structure and pave a way into the promised land. At least in theory. In practice, at the beginning of Miasma Chronicles we are at a point where we can’t get very far with our meager powers and have to level up first. Of course everyone in our homeland is willing to help us and gives us tips. And coincidentally, at the moment of greatest need, energy whirlpools open up that make our strength really super.

No, Miasma’s plot isn’t particularly creative and sticks to well-known patterns. But tried-and-tested things are tried-and-tested for a reason, and at least the title takes more daring paths elsewhere, which aren’t really innovative either, but still work well.

The beginning of the story initially raises question marks. Set in the real world, the so-called “Great Stability” lasted for 140 years, until a whirlpool of dark matter swept across America, corrupting everything it touched.

Where this particle cloud called Miasma comes from and what sinister powers are behind the end of the world is of course not yet revealed in the demo. The personal circumstances of the playable protagonists Elvis and Diggs remain less obscure. Elvis possesses a glove that obeys only him, with which he can rudimentarily control the miasma.

He received it from his mother as a child before she disappeared and is now waiting for him on the other side of the particle wall. It was his mother who handed him over to the robot Diggs as a child, with whom Elvis has a brotherly relationship.

Diggs is aware of the fact that he’s not human, but that doesn’t stop him from flirting with people – and being successful at it.


This brings us to one of the greatest strengths and weaknesses of Miasma Chronicles. The strong personalities ensure dialogues that range from very lively and believable to uncomfortable. Joke and charm are there, but the overall picture is not really coherent.

The world is dark, dirty and looks very real – the characters, on the other hand, feel like they have fallen out of the Futurama universe and don’t quite want to fit into the setting. The Mayor, a head in a capsule filled with a liquid smoking a cigar with robotic arms, is a good example here; the charming character just seems a bit out of place. Despite these weaknesses, Miasma appears to offer an atmospheric world and entertaining moments.