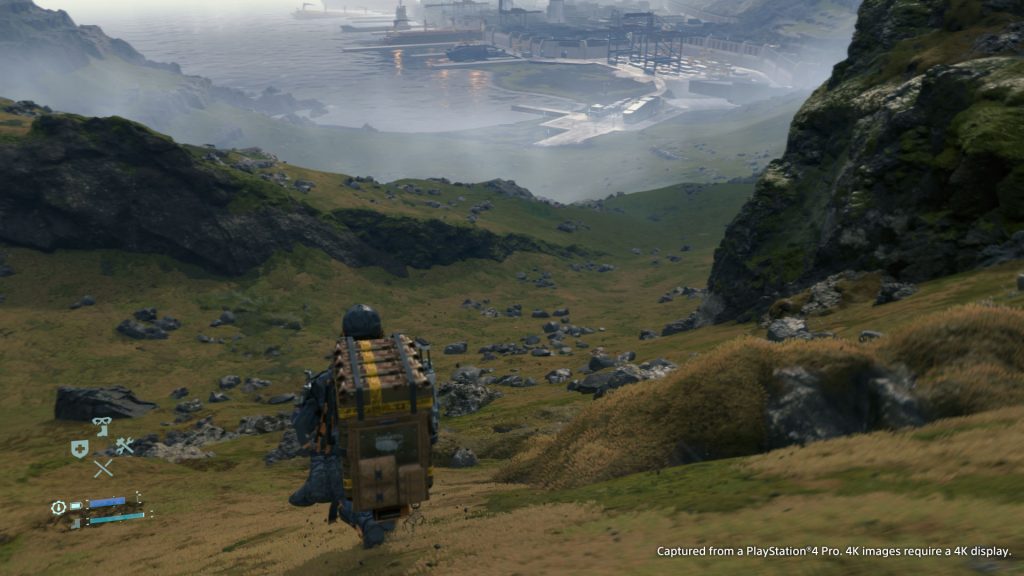 Death Stranding was released in 2019 under game designer Hideo Kojima and divided the opinions of the players: some were enthusiastic, while others dismissed it as a running simulator. I want to explain to you what Death Stranding is about, what the multiplayer in the game looks like and why I still love playing the game three years after its release.

After years of studying, I was faced with the last hurdle that separated me from a master’s degree: the master’s thesis. I studied media and communication in Augsburg and was looking for a topic that I wanted to deal with intensively for six months.

So I thought about what had particularly stuck in my mind lately and what seemed interesting enough to invest so much time in: So why not just write about one of my favorite games?

Death Stranding was my favorite right away, as I was already intrigued while playing it with its extraordinary concept. There were also so many unanswered questions that I couldn’t answer on the first playthrough. In fact, I was really looking forward to immersing myself in the game for half a year and ultimately getting my master’s degree with my dedication to gaming.

The game is set in a post-apocalyptic world where a large part of the population has perished in the catastrophic event known as Death Stranding. The lines between life and death blur. So-called Beached Things, BTs for short, ghost and monster-like creatures make the world a dangerous place.

In this setting, the player slips into the role of the messenger “Sam Porter Bridges”. He supplies survivors with goods deliveries and is supposed to connect America through a network. He also has to rescue the future president from captivity by a terrorist group. If this sounds strange to you, you’ve definitely played too few Hideo Kojima games in your life.

As you travel through America as Sam, it turns out that not everything is as it seems at first glance and the survival of all mankind depends on Sam.

What is the gameplay like? A lot of the gameplay is actually getting from point A to point B while doing as little damage as possible to the cargo.

The world feels desolate and desolate after the apocalypse, but at the same time provides a beautiful landscape for the player to explore.

However, the player must be careful of the BTs, the terrorists or the MULES. The MULES are a group of NPCs trying to steal Sam’s packages.

In between, the gameplay varies with stealth sequences and combat situations. In those I felt strongly reminded of Metal Gear Solid.

Who is Hideo Kojima? As the creator of the successful Metal Gear series, the Japanese game designer is known for his complex and unusual game ideas. He is one of the last great rock stars in gaming and is revered and admired by some for his ideas.

The true meaning of lonely multiplayer

One of the most interesting things about Death Stranding is the way multiplayer is integrated into the game. Kojima calls it the “Social Strand System”.

If the player connects an area to the chiral network, the traces of other gamers become visible to him. The chiral network is comparable to the Internet and enables the exchange of data.

Structures such as roads or ladders that other players have placed in the world can now be used by yourself once the area is online.

If the player would like to show appreciation for the support of others, he can give likes, similar to social networks. This, in turn, helps move up the Death Stranding standings.

Resources and items can also be shared with other players. In addition, the player can collect and deliver the lost packages of others.

Similar to the coop in Elden Ring, the gameplay becomes much easier with the help of fellow players. Especially when the player in Death Stranding does not have to build the infrastructure alone, but receives support to facilitate the delivery process with tools.

Kojima explained what is behind the special multiplayer in Death Stranding. He tweeted an image of Death Stranding with the explanation, “Through your gaming experience, I hope you will understand the true meaning behind connecting with others.”

Death Stranding serves to ensure that the player not only connects people within the game world, but also in real life. The indirect multiplayer creates links to other players worldwide, which means that the individual player should not feel so alone.

In the spoiler box you will find a meta explanation behind the game.

Before the actual start of the game, the short story “Nawa” by Kobo Abe is displayed. It is about the stick and rope as mankind’s first tools. The rope is used to bring the good to one. The stick is used to keep evil away from you. It is said that whenever you meet people, you will also find these two objects.

They serve as a metaphor for what unites people and what separates them.

The game picks up the metaphor again and again. This can take the form of specific items, like a revolver, or the locations that Sam integrates into the network as he travels. So all cities have KNOT in their name (“Edge Knot City”).

Before a boss fight, it even says literally: “Stick versus Rope. Gun versus Beach”. Because the characters in Death Stranding also embody the metaphor. Opponents of the main character, such as Higgs or Cliff, take on the role of the “sticks”. The main character, Sam Porter Bridges, turns out to be Sam Strand towards the end of the game. Strand means strand. Over the course of the story, Sam thus developed into a metaphorical rope.

The more time I spent with Death Stranding, the more details I noticed about the game that referenced other games or movies. This is not surprising since Kojima is known to be a big film fan himself.

Already during the casting of the main characters, Kojima lives out his love for film. There are some obvious film industry figures, such as leading actor Norman Reedus. Most of you should know him as Daryl Dixon from the AMC series “The Walking Dead”, where he is the zombie killer with the crossbow and the motorcycle.

Behind the two figure models of “Deadman” and “Heartman” are well-known faces of the film industry with the directors: Guillermo del Toro (“Shape of Water”) and Nicolas Winding Refn (“Drive”).

If the player makes his way to the cosplayer, he meets the American late-night host Conan O’Brien, who tries to make Sam laugh with otter jokes

If you are a film fan, Death Stranding has a lot to offer: The story of life and death is told with a prominent cast and epic film moments. Eagle-eyed players may discover some interesting details that will become relevant later, indicating that a sinister intent lurks behind a character who acts friendly – or vice versa.

Above all, I find the film scenes of Combat Veterans impressively implemented cinematically. They are full of symbolic elements and seem nightmarishly surreal to me. In doing so, they create the perfect atmosphere for what follows the cutscenes and stage the character shown in an interesting way.

Here you can see the teaser trailer for Death Stranding with a cutscene for Combat Veteran:

Who would I recommend Death Stranding to?

Death Stranding isn’t for everyone. When it comes to finding a quick game to gamble in the evening, where you want to switch off after a hard day, you probably won’t have much fun with Kojima’s game.

Many criticize that the gameplay is too boring and monotonous and some can’t do much with the game’s narrative (metacritic).

Still, I can recommend Death Stranding. I think especially gamers who are big movie fans and who value a good story can enjoy the game.

Because for me the story was always a motivator to stick with it, even in somewhat lengthy gameplay passages in which I delivered packages.

On the other hand, the game is suitable for everyone who likes to deal with profound topics and enjoy exploring the meaning behind things.

Even if you don’t feel like interacting directly with other players, but still want a sense of community in the game, Death Stranding is an interesting alternative to typical multiplayer games.

Almost three years after its release, the game hasn’t lost its topicality for me. Death Stranding advocates growing as a society from a crisis and coming out of it better together instead of fighting each other – a message that is perhaps more important now than ever.

Have you played Death Stranding yet? Write it to us in the comments.

Conclusion: Death Stranding is gripping and full of meaning if you take the time to look closely

In Death Stranding, Kojima creates a wonderfully surreal and complex world that has many surprises in store both within the story and on the meta level: plot twists that turn the entire previous story on its head and profound themes and meanings that are hidden in the details.

Actually, it’s a desolate, post-apocalyptic world, full of death and loneliness. At the same time, Death Stranding tells a story about humanity and the importance of human relationships. And I find that incredibly beautiful.

In fact, the multiplayer aspect did what Kojima wanted for me. Despite the indirect exchange, I always had a sense of community and was grateful for the help of the other players in the game.

It may be that it was also due to the fact that I wrote my master’s thesis alone in the home university exactly in Corona times and the topic therefore really got to me.

But the fact is that even today I can say: Death Stranding is one of my absolute favorite games and I would choose it again and again as a master’s thesis topic.