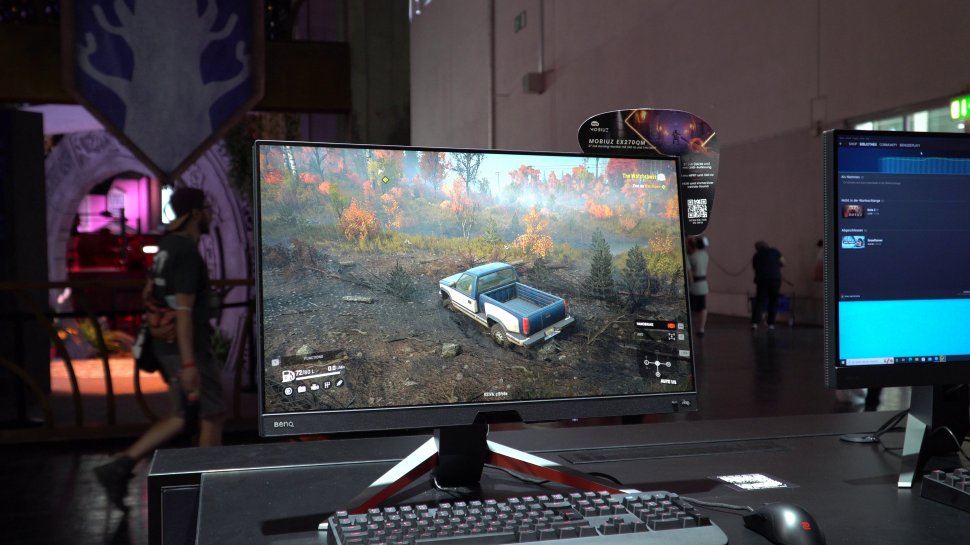 08/28/2022 at 07:45 am
from Manuel Christa –
BenQ is presenting several new gaming monitors at Gamescom 2022 in Cologne. The most interesting model is likely to be the 48-inch OLED monitor, which has a 4K/UHD resolution at 120 Hz. Two other innovations, also from Benq’s Mobiuz sub-brand, are equipped with 27-inch LCD panels.

BenQ is the only monitor manufacturer that has two gaming sub-brands: while “Zowie” only sells dedicated e-sports models, the company serves the gaming mainstream in all known variations under “Mobiuz”. The BenQ Mobiuz EX48UZ is the manufacturer’s first OLED monitor.

With a diagonal of over 48 inches, the EX48UZ is more comparable to a television than a monitor, but not the equipment: It has everything that a modern gaming monitor entails. These include a refresh rate of 120 Hz, Freesync with G-Sync compatibility and even a KVM switch. A 2.1 sound system is also integrated, i.e. two five-watt speakers together with a ten-watt subwoofer. A Displayport 1.4 input and two HDMI 2.1 inputs are available for the 4K/UHD resolution and the 120 Hz. There is also a USB-C port with 90 watt power delivery and two USB-A sockets. With SPDIF and headphone jack, the monitor also has two audio outputs.

Like all monitors with the 48-inch OLED panel from LG, it offers a true 10-bit color depth and a DCI-P3 color space coverage of (approximately) 98 percent. Typical for OLEDs, the response time is 0.1 milliseconds. What it lacks is the sharpening of moving images from BenQ’s DyAc technology, which the manufacturer only offers in the LCD models.

The Mobiuz EX480UZ is comparable to all other 48 OLEDs. LG has been on the market with similar televisions since 2020, Gigabyte with a 48 monitor (FO48U) since this year. The latter is doing quite well with a price level of just under 1,000 euros, so that the competition that is now appearing sounds quite sporty with the suggested 1,900 euros as an RRP. We are curious how the street price will ultimately turn out here. The OLED monitor should be on the market from the end of September.

BenQ is also presenting two new LCD monitors at Gamescom: the Mobiuz EX270M is a 27-inch IPS panel with Full HD and a refresh rate of 240 Hz. The same with the EX270QM, except for the resolution, which offers a little more pixels here with WQHD. BenQ calls an MPRT of 1 ms here, but the gray change response time should be somewhat higher, which is typical for IPS.

Both models differ in color depth and color space coverage: The full HD model EX270M offers 8 bits and 99 percent sRGB, while the WQHD monitor EX270QM with 10 bits is said to cover larger color spaces almost completely – BenQ calls 98 percent of the DCI here P3 color space. The Full HD model is specified with an RRP of 399 euros and the WQHD model with one of 799 euros. Both are also scheduled for release towards the end of September/beginning of October.